Share All sharing options for: A Game From Cubs History: July 2, 1950

1950 was a peculiar season in the National League; the Phillies wound up winning the pennant, their only league title between 1915 and 1980. The Cubs, meanwhile, hung around contention for the season's first half, sticking within five or six games of the lead even though they were mostly in fifth place through much of that time.

When they demolished the Reds 16-0 in Cincinnati July 2, they were a game over .500 and just six games out of first place. Irving Vaughn of the Tribune picks up the story:

This wasn't rare in baseball in those days; it seems less so now, spike injuries of that kind. Meanwhile, the Cubs went straight downhill after that huge win; they lost nine of their next 11 and went 32-58 the rest of the season.

It was also the beginning of Cubs management's 1950s and early 1960s philosophy of trying to squeeze more decent play out of aging players. Have a look at the 1950 roster; it's filled with names like Dubiel, Bill Voiselle, Mickey Owen and Johnny Vander Meer, players several years to a decade beyond their primes. Only 33-year-old Hank Sauer, among the thirtysomething members of the club, had a good year. The 1950 Cubs had two good players -- Sauer and Andy Pafko -- the rest were pretty much roster filler.

1950 also saw the first appearance of a 17-year-old catcher named Harry Chiti, signed out of high school and rushed to the big leagues because he had a physical resemblance to Gabby Hartnett. That worked out about as well as you might have expected.

Here's the 1950 scorecard; click on the image to open a larger version in a new browser window or tab. 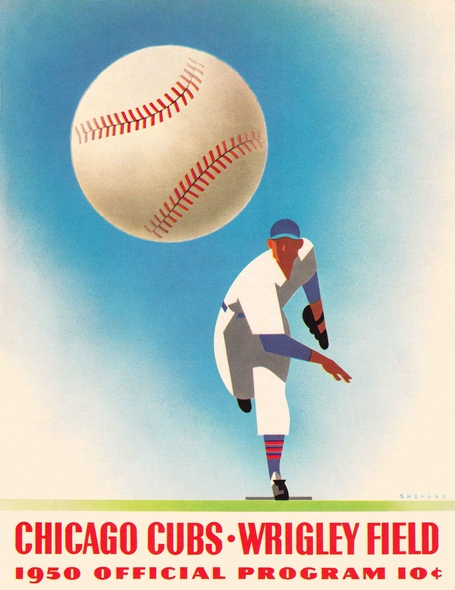