The Cubs made a panic trade in mid-1951; the results were predictable.

Share All sharing options for: A Game From Cubs History: June 16, 1951

This was to become a familiar story for decades: a Cubs team starts out well, flirts with first place for a month or two, then descends into the basement.

That was followed by a 4-12 stretch that panicked management into "doing something", and the something became one of the worst trades of the era. After a loss to the Dodgers at Wrigley June 15 -- which was then the trading deadline -- they sent Andy Pafko, Johnny Schmitz, Wayne Terwilliger and Rube Walker to the visitors from Brooklyn for Bruce Edwards, Joe Hatten, Gene Hermanski and Eddie Miksis.

Pafko wasn't just popular, he was probably the Cubs' second-best player (behind Hank Sauer). He'd gotten off to a bit of a slower start in '51 than his fine 1950 season. The deal was consummated after talks involving Cubs manager Frank Frisch and general manager Wid Matthews, and Dodgers vice president Buzzy Bavasi and manager Chuck Dressen. In those days managers still had some authority over, or at least input into, trades like that.

The Tribune's Edward Prell quoted Frisch on the deal:

Meanwhile, Pafko helped lead the Dodgers to the World Series in 1952, eventually played in two more World Series for the Milwaukee Braves in 1957 and 1958, and was missed by Cubs fans everywhere. The Cubs beat the Dodgers in Pafko's first game for them, 6-4 at Wrigley (Pafko homered for the Dodgers), and Pafko's comments on the deal were reported in the Tribune:

So fans booed Cubs players for making what they considered was a bad deal by management. In those days, it was likely the only way they could express such dissatisfaction. The Cubs wound up losing 92 games; it was the third time in four years they'd cracked the 90-loss mark, and the first time in franchise history they'd had five straight losing seasons.

Here's the full image of the 1951 scorecard; click on it to open a larger version in a new browser window. 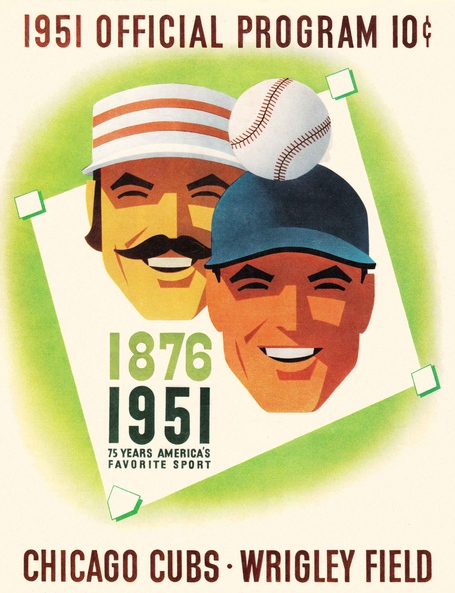