The Cubs were headed for a franchise record in 1953, but a late-season surge helped them avoid a team worst for losses.

Share All sharing options for: A Game From Cubs History: September 14, 1953

By 1953, Cubs management had seemingly given up on contending. It had been seven years since the last winning season; the Cubs, once one of the top teams in the National League, had posted three 90+ loss seasons over that span (and remember, they had eight fewer games in which to do that than they do now).

Check out the scorecard cover for 1953 (click on it to open a larger version in a new browser window): 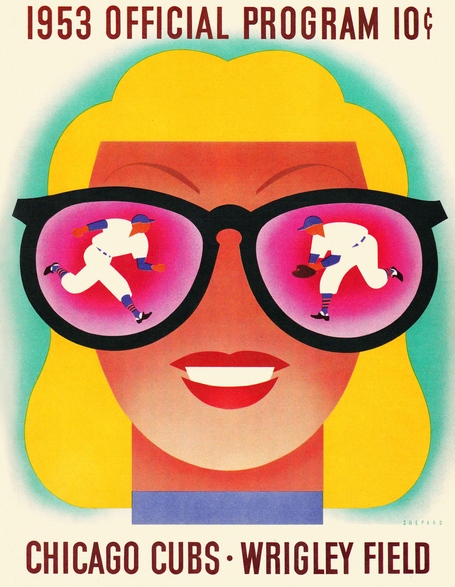 It was the first of several straight years in which the scorecard cover promoted "beautiful Wrigley Field" or fans having fun, instead of baseball.

And that was probably the right thing to do, at least for 1953. Despite the acquisition of slugger Ralph Kiner in a mid-season trade, the offense was pathetically bad; Hank Sauer didn't come close to matching his 1952 output and Kiner wasn't the player he had been with the Pirates due to chronic back trouble. The pitching staff was similarly atrocious.

The team record reflected that; after a loss to the equally-woeful Pirates on June 14, the Cubs were 14-36, already 21 games out of first place. They continued to lose; after they dropped yet another game in Pittsburgh September 2, they were 50-82. If they had played to that percentage the rest of the year, the 1953 team would have been the worst in franchise history; they were on pace to lose 98 games.

And then, inexplicably, they won 10 games in a row, all at home; the last of them was a convincing 3-1 win over the pennant-bound Dodgers, a nicely-thrown complete game by Johnny Klippstein. Edward Prell of the Tribune wrote an article headlined: "It's Fantastic!"

Fantastic though it might have been -- it brought the Cubs to within two games of the sixth-place Reds -- they went just 5-7 the rest of the way and stayed in seventh place. Like the Cubs of the last couple of years, who avoided last place because of the awful Astros, the Cubs stayed out of the N.L. cellar in 1952 and 1953 because of the terrible Pirates, who lost over 100 games both seasons.

And three days after this game, in front of just 2,793 at Wrigley Field, a skinny young shortstop made his major-league debut, batting seventh. Here's the box score from Ernie Banks' first big-league game.