The Cubs weren't very good in 1954. But early in the season, they played a memorable game against the Cardinals.

Share All sharing options for: A Game From Cubs History: April 17, 1954

Phil Cavarretta had been a fine player for the Cubs for two decades; 1954 was to be his fourth year managing the team. The Tribune reported on April 1:

(Which is one of the reasons I have promoted the idea that the Cubs need to retire more numbers for their greats of the past.)

Not long after that, Cubs owner P.K. Wrigley asked Cavarretta how he thought his team would do in the upcoming season. He told Wrigley they'd be "a second-division club" -- in other words, finish in the bottom half of the standings. In 2008, Cavarretta told the Chicago Sun-Times what happened next:

Like a dumb dago, I told the truth in a meeting with my owner. I was raised that way. My dad would always say, 'Tell the people the truth. Tell them what's on your mind.' I told the truth to Mr. Wrigley and got fired.

Not only that, but the number retirement was apparently revoked -- there's no written proof of this, but obviously, despite the published report, it never happened. Cavarretta was replaced as manager by Stan Hack, another former Cubs great, and it turned out he was right -- the Cubs weren't any good in 1954, losing 90 games and finishing seventh.

Before they plunged into the depths of the National League, though, they had one wild win over the Cardinals April 17 at Wrigley Field, the third game of the season, in which they crushed the visitors from St. Louis, 23-13. They have scored that many runs in a game at Wrigley only once since then -- May 17, 1977 against the Padres. The weather forecast for that day was for southwest winds 15-20 miles per hour and temperatures around 65; the hitters took advantage with five home runs. Edward Prell of the Tribune has the story:

Fifty-seven Cubs marched to the plate in wind swept Wrigley field yesterday when the daffiest game played there since 1922 resulted in a whopping 23 to 13 victory over the St. Louis Cardinals.

The Cubs, including Stan Hack, thought the time required was worth it, even disregarding the fact that it was the longest game ever played in the National league, which has been doing business since 1876.

One inning, the fifth, when the Cubs rocked the still winless Cardinals with a 1O run barrage, took 58 minutes to play.

All of the old Wrigley field settlers who were polled insisted this was the most violent afternoon by the modern Cubs since Aug. 25, 1922, when they reverted to the Spalding era of boxcar figures in beating the Phillies 26 to 23, a big league scoring mark for two teams in one game.

Well. That would have been worth watching in a 64-90 season. Just about everyone in the lineup contributed; Ralph Kiner had four RBI and Randy Jackson homered and scored four runs to lead the 20-hit, 12-walk attack. The time-of-game record stood until 1962, when the Dodgers and Giants, by then in Los Angeles and San Francisco, broke it in this game; many years later, the Cubs reclaimed the record against the Brewers May 11, 2000, though even that 4:22 game has now been surpassed.

Here's the full 1954 scorecard; click on it to open a larger version in a new browser window or tab. 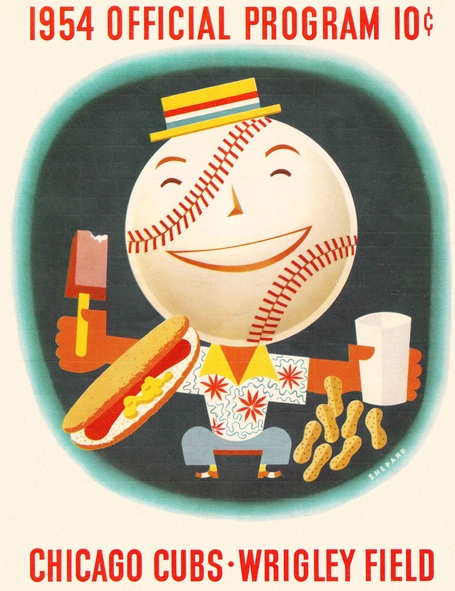