Ernie Banks had one of the best days of his career on this summer afternoon at Wrigley.

Share All sharing options for: A Game From Cubs History: August 4, 1955

The Cubs were improved, too; they had little chance of competing with the 98-win Dodgers, but they managed to stay in second place most of June, and after a win over the Braves July 8, were 45-38.

Nevertheless, Banks continued to hit, and on August 4 at Wrigley he had the first three-homer game of his career, helping lead the Cubs to an 11-10 win over the Pirates. Irving Vaughn has the story from the Tribune:

Banks wound up 4-for-5 that day with four runs scored and seven RBI; it was games like this that helped turn him into "Mr. Cub" -- remember, he was in just his second full major-league season and only 24 years old at the time. The win was the second of six straight that brought the Cubs to within a game of .500, but they never did make it back to even. Still, the 72-81 season was a significant improvement over 1954.

Here's the 1955 scorecard; click on it to open a larger version in a new browser window or tab. 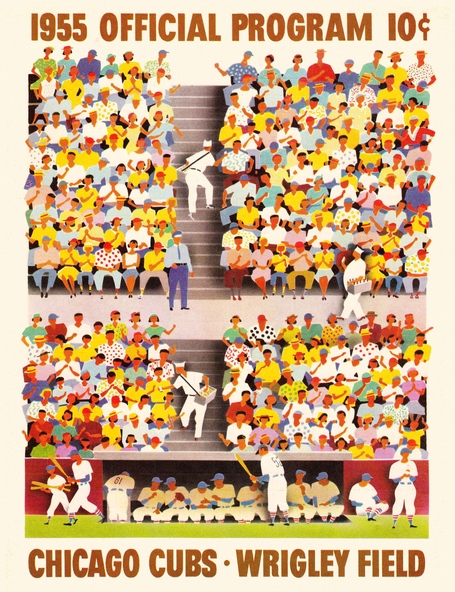