The Cubs set a team record in 1956 that they'd probably rather not have happened.

Share All sharing options for: A Game From Cubs History: September 30, 1956

After a brief "resurgence" to nine games under .500 in 1955, the Cubs completely collapsed in 1956. Part of it was Ernie Banks' down year, suffered in part due to a broken hand that happened in August; Banks had played 717 consecutive games, the longest streak in Cubs history until Billy Williams came along in the 1960s.

The rest of it was a pathetic pitching staff that allowed the second-most runs in the National League. The Cubs were never in contention and dropped into last place in late April; they got out for a while in midsummer but fell back to eighth and last following a seven-game losing streak in late August.

The only question remaining: would the Cubs break the club record for losses, 93, which had been set just seven years earlier?

The answer: Yes, on the season's last day, September 30, when a 4-2 loss to the Reds in front of a small gathering, set the franchise record with the Cubs' 94th defeat of the season. Irving Vaughn's recap in the Tribune summed up the lethargic attitude of most following the team in that era:

Meanwhile, Cubs attendance dropped by over 150,000, and that was a lot for that era: from 875,800 in 1955 to 720,118 in 1956, a drop of almost 18 percent in an era when the turnstile count was announced and there were almost no season tickets. It was the Cubs' lowest attendance total since 1944; in addition, there were only 58 home dates, as the Cubs had a huge total of 19 home doubleheaders (and another 14 on the road). The 1950s (and to some extent, the 1960s), were the heyday of twin bills -- teams thought they could get more people in the park by offering two games for the price of one. Looking through the Cubs' attendance figures for 1956, that didn't really work -- of course, it would have helped attendance to have a better team, too.

You can see by the scorecard image below (click on it to open a larger version in a new browser window) that the Cubs' attempts to get people to come to Wrigley for sunshine and fun, rather than baseball, were continuing. 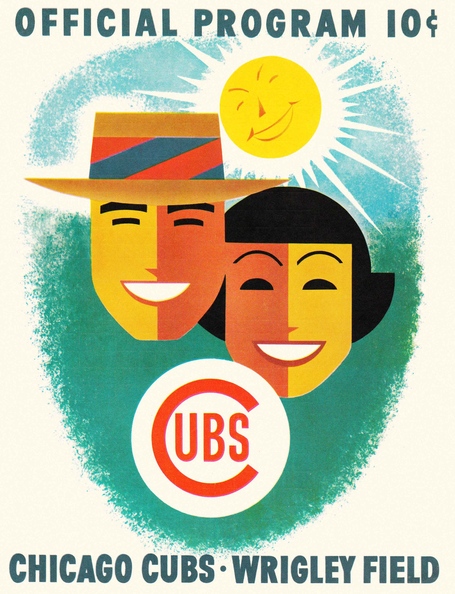