A 20-year-old starting pitcher for the Cubs had made just a handful of major-league starts, when, in May of his rookie season, he had a game for the ages, in which he set a team record by striking out a huge number of players from a team headed to the postseason.

No, I'm talking about Dick Drott, the Kerry Wood of his day. In just his seventh major-league start, in the first game of a doubleheader May 26, 1957, he struck out 15 Milwaukee Braves. The Braves were headed to the World Series and the Cubs to another 90-plus loss season (92, to be exact), but Drott, though he wound up allowing five runs (four earned), had a strikeout pitch going against All-Stars like Hank Aaron (three times) and Del Crandall (twice). Edward Prell summed it up in the Tribune:

Drott finished a fine rookie year with numbers not too different from Kerry Wood's 1998 season, although with quite a few more walks (129, leading the league). He struck out 170 (second in the N.L.) in 229 innings, going 15-11 (a fine W-L record on a 92-loss team) with a 3.58 ERA. He finished third in Rookie of the Year voting. Unfortunately, Drott got hurt the following year, and without modern ways to fix those sorts of injuries, he bounced back and forth between the Cubs and the minors for a few years, then was let go in the expansion draft to Houston. He was out of baseball at age 27 and died young, at age 49, of stomach cancer. His baseball-reference page says that his top comp at age 20 was Jim Palmer, which only hints at what could have been without the injuries.

The May 26 sweep meant little to the 1957 Cubs; they were 11-20 after that day, off to an awful start. Just five days later they lost to the Reds in Cincinnati 22-2, and had to win their last four games of the season to both avoid another team record for defeats, and to stay out of last place.

Here's the 1957 scorecard full image; click on it to open a larger version in a new browser window. 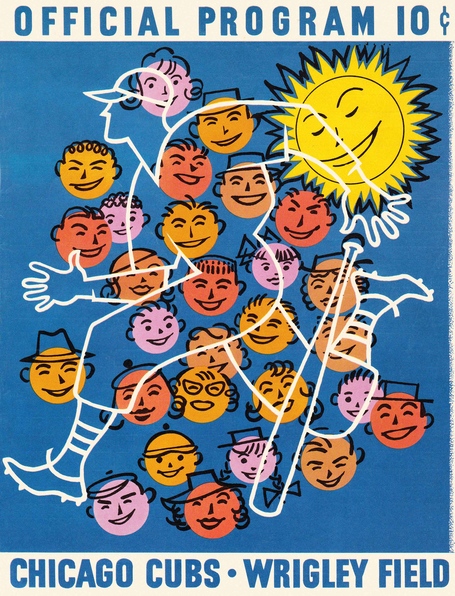