The Five Most Beautiful Words In The English Language

Share All sharing options for: The Five Most Beautiful Words In The English Language 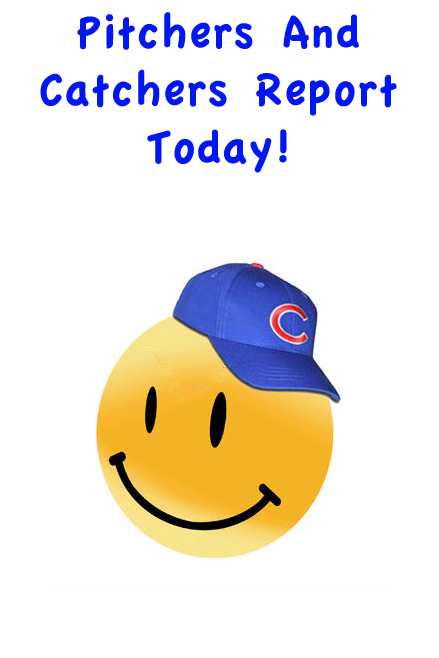 For the first time in several years, I won't begin a post at the beginning of spring training with some sort of optimistic words about how Cubs management is gearing up for one more run at a division title with the remnants of the 2003, 2007 or 2008 division championship crew.

That is, obviously, because that crew is broken up and gone. Only Kerry Wood remains from the 2003 NL Central champs, and he had to leave and return to still be a Cub. The only other 2012 Cubs who played on either 2007 and 2008 title teams (or both) are Ryan Dempster, Alfonso Soriano, Geovany Soto, Carlos Marmol, Jeff Samardzija and Reed Johnson.

Beyond those seven, here are the only holdovers from 2011 (not including September callups like Bryan LaHair) likely to make the Opening Day roster this year: Marlon Byrd, Matt Garza, James Russell, Randy Wells, Starlin Castro, Darwin Barney and Jeff Baker. Chris Carpenter, who spent some time on the roster before Sept. 1, also has a shot.

Counting LaHair, who seems likely to be the Opening Day 1B, that's 16 returnees, leaving nine open spots -- that's a lot, and of course Carpenter and LaHair weren't on last year's Opening Day roster.

So we are truly seeing a turnover not seen since... well, I'd say since the offseason between 2002 and 2003. Which was also the first offseason under a new GM, Jim Hendry (though not a complete changeover in management, as Andy MacPhail was still around).

Before you accuse me of trying to compare this season, possibly, to 2003, when the Cubs surprisingly won a division title after losing 95 games the year before, I know that's not going to happen in 2012.

What I would like to see is improvement, and I think we're going to get that. When I say that, I'm not even necessarily talking about wins, although I think we'll get that too. What I want is to see better fundamental baseball, tighter defense, better situational hitting, better bullpen management, accountability when players don't hustle.

And I think we'll get that from Dale Sveum and the new management team. Yes, I know. I thought we'd get that from Mike Quade a year ago, and it didn't take too long to show that Quade and his minor-league coaching staff was way over its collective head.

That shouldn't happen here. Sveum has coaching experience on playoff teams, and took over a Brewers team in 2008 under weird circumstances and guided them to a wild-card berth. Jamie Quirk has been a bench coach on a World Series team. Dave McKay has many years coaching under Tony La Russa. It's a far more experienced staff.

As far as players are concerned, we have a lot of "who knows?" guys. Ian Stewart could be a sleeper, if he can somehow get back to his 2009 level. Travis Wood and Chris Volstad could be useful starting pitchers. Carlos Marmol was really good in 2010 -- if he could get back to that level and stop blowing saves...

I know, I know, I'm dreaming. But isn't that what this time of year is all about? Renewal. Spring coming. Warm weather and baseball. If we can't hope now, when can we?