The mayor of Chicago has some new ideas on how to renovate Wrigley Field -- most of them good ones.

It's already being discussed in this FanShot, but I thought I'd weigh in with a longer article (and this turned out to be way longer than I had originally intended, but I wanted to be thorough) with my thoughts about the article in today's Sun-Times detailing some proposed future renovations to Wrigley Field, now backed by Mayor Rahm Emanuel.

Wrigley Field will be 100 years old in 2014, and the Cubs' tenure there will reach the century mark in 2016. Although the ballpark has been well-maintained -- probably as well as any 100-year-old building in Chicago -- there is no doubt that it needs updating, with two primary purposes:

After the jump, examining each point of the proposed renovations/changes, and how they might be financed.

Two days before the Cubs’ home opener, Emanuel said he was in the "final stages" of negotiating a Wrigley deal.

He also telegraphed his plan to help the team squeeze more revenue out of Wrigley — by demanding that the Cubs invest their own money in the stadium instead of pumping $200 million into construction of the triangle building.

Sources said the final deal is still likely to include a variation of the financing scheme that Emanuel once called a "non-starter" — forfeiting 35 years’ worth of amusement tax growth.

Sounds like a fair deal for everyone. Every other major league sports team in Chicago has received some public money for new/renovated facilities. Granted, this is not necessarily the best time in the history of this city or county to ask for public money. But this doesn't seem as if it would cost the city money, and while doing that, would also require the Ricketts to invest money into the project.

Now, point-by-point, the new "features" you'd see at Wrigley if this proposal goes through.

More outfield signage behind the Wrigley Field bleachers, possibly including a Jumbotron in right field.

I don't really have a problem with this. For those who want a "pristine" Wrigley Field, I point you to this photo of the Cubs' former home, West Side Grounds, taken in 1910: 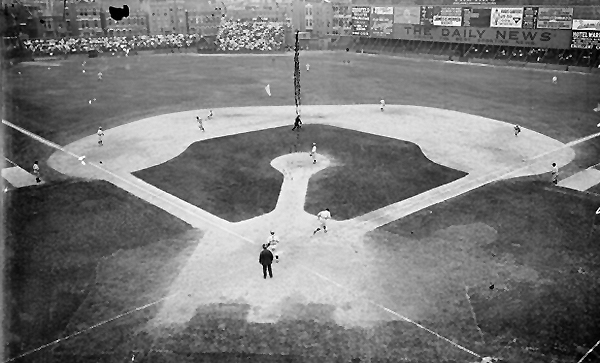 What do you see lining the outfield in right field? Tons of ads. 1910 was the year when the Cubs were finishing up their dominance of the National League; they had won four pennants in five years (and won 104 games in 1909, finishing second to the 110-win Pirates). I'm guessing the money from those ads helped finance some of those winning teams. I'm also reasonably certain that had William Wrigley the elder not died suddenly in 1932, he might have put ads in Wrigley Field in the 1930s and 1940s to help finance his team, and we wouldn't be having this debate now. There's a way to do advertising and still keep the Wrigley feel. For me, the focus when I'm at the ballpark is on the field. I don't care about the ads. Bring 'em on.

Regarding a Jumbotron, I've commented on this in the FanShot, but I'm not sure there's even room for one in the tight space that is Wrigley. The Red Sox managed to put one large and one small video board in Fenway Park, but that's in a commercial area, while Wrigley is in a residential neighborhood. I'm sure the Cubs are making decent money from the new LED board. They should think of other creative ways to put ads in, without necessarily having to build a Jumbotron (and modern Jumbotrons are four to six times the size of the existing Wrigley scoreboard).

Street closings on Sheffield and Waveland every game day to make way for money-making street fairs.

Every day??? Yes, I know. They do this in Boston -- close off Yawkey Way, have bands play, have shops selling food and souvenirs. Again, that's in a commercial strip; I can't imagine the local residents (or Ald. Tom Tunney) being real receptive to the idea of this happening 81 times a year. Plus, what happens on cold days or nights when the crowds are smaller? I know the Cubs were very pleased with the "block party" they threw for the Northwestern/Illinois game in November 2010. But the type of crowd that shows up for a one-time event, especially college football, is very different from the day-to-day baseball crowd.

The Cubs had some success with doing this on the triangle property for the series last year vs. the Yankees, White Sox and Cardinals. Maybe on a limited basis like this, nine times a year, it might work -- it would still be special then.

Every day? Not so much.

Sponsored "gateway" archways that welcome people to "Wrigleyville: Home of the Cubs" from various directions.

This is pretty much a no-brainer. Easy to build, easy to sell sponsorships, don't get in the way of anyone's residence (I assume they'd be built on Clark and/or Addison Sts).

It depends on what they mean by "more". If you do too much of this, you take away the "special" image of these events that helps lead to sellouts. The Cubs found this out regarding the "Road to Wrigley" minor league game. The first one drew 32,000; the second, 16,000 and the third less than 9,000 (though, to be fair, the weather was poor that night). The novelty wore off.

I'd say the current three-concert limit might be increased to four per year -- though you don't want too many, so as to keep the field in decent playing shape. And if they could get one football game every year -- or even another NHL Winter Classic -- that would keep those special.

In connection with "more", I'd also be in favor of amending the city ordinance regarding night games, to allow up to 40 night games a year. If that wasn't palatable to the city, at the very least, the Cubs should be allowed, two or three times a year, to play a Friday night home game after returning from a road trip (this Friday would be a perfect example of a time to do that).

along with a stadium club, restaurant and several thousand premium-priced seats.

Stadium club and restaurant? More no-brainers; the relocation of Cubs team offices to a building at Clark & Waveland leaves some space that could be renovated for this use. "Several thousand" premium-priced seats? Depends on what they mean by that. If they are going to add several thousand seats like this, they will wind up squeezing in seats in places never designed for that. Yes, they did this at Fenway, but they had room for them (Fenway never had an "upper deck" -- now it does). If they are talking about re-branding existing seating as premium seating, with amenities attached, I think that would work.

One thing that isn't mentioned at all here is new player facilities -- workout facilities, medical rehab facilities, batting cages, a larger clubhouse. I assume that would be part of any large project to improve Wrigley Field.

Many of these ideas have been discussed for years; most of them would enhance Wrigley Field, not detract from it, and would serve to make Wrigley economically viable for the next 50-75 years, while still preserving baseball at Clark & Addison.