As part of Social Media Night hosted by the Cubs Wednesday, the team announced a new promotion that will begin immediately.

Fans in the bleachers will get scratch-off cards. There will be seven winning cards among the more than 5,100 distributed (if there's a sold-out bleacher crowd). Those seven people will be brought down to the field and serve as the Cubs' bullpen that night.

No, I made that all up. But seriously, how much worse could it be than the real bullpen?

The Cubs were having a fairly good night, even going ahead in the fourth inning on Alfonso Soriano's second home run in as many games. (Albert Pujols, apparently incensed at Soriano going ahead of him in that category, also hit his second of the season, just an hour or so later. What a race!) The game stayed close at 3-2 heading into the ninth inning, even after Shawn Camp gave up a home run to Carlos Ruiz that put the Cubs behind.

And then Scott Maine and Michael Bowden made it un-close; it ended in a 9-2 blowout of the Cubs by the Phillies, equalling the second-worst margin of defeat for the Cubs this season.

Matt Garza pitched well enough, giving up eight hits and one run before he was taken out with two out in the seventh inning, having thrown 107 pitches. I suppose he had just about reached the end of the line, and with two out and a runner on second Dale Sveum apparently decided he'd rather have James Russell face Ty Wigginton than Garza face Juan Pierre again.

This was probably a good idea. Forget the designated hitter -- can we get a designated fielder for Garza? I don't think I have ever seen a starting pitcher whose fielding is as awful as Garza's. He made a throwing error allowing Pierre to reach in the first inning, and then in the third, Pierre bunted, and Garza threw the ball as if he wanted to drill for oil right on the Wrigley turf -- bouncing it directly into the ground.

Designated fielder. The extra player would stand next to the mound and only touch the ball if it were hit within a circle drawn around the mound, and make defensive plays. Or, if Garza were to actually get the ball in his glove by mistake, the DF could then just take it and make the play.

I'm not serious here, obviously, and I don't think there's anything that can be done about Garza's defense. Practice? Steve Sax, a Dodgers second baseman in the 1980s, had a similar issue. He took hundreds of grounders in practice and threw them perfectly, but once in games he got the yips.

Garza's either going to have to strike batters out or get them to hit popups or fly balls. Ground balls within 30 feet of him that he can get to are almost certain to have the runner reach base.

Meanwhile, Soriano's home run must have stunned his teammates, because after he hit it, not one of them was able to reach base; Phillies pitchers retired the last 17 Cubs to come to the plate, and only three of them managed to hit the ball out of the infield.

The Cubs' bullpen, bad most of the year, was atrocious Wednesday night. Russell came in and did his Kerry Wood impression by walking the first batter he faced on four pitches. He did get out of the inning by striking out Shane Victorino. After Camp gave the Phillies the lead, Scott Maine and Michael Bowden put the game out of reach in the ninth. The crushing blow was a grand slam hit by Hector Luna. (Organist Gary Pressy amused what was left of the crowd by playing the Luna Carpets jingle as he stepped to the plate.)

Hector Luna?!?!?!?! Before this year, he last played in the major legaues with the 2010 Marlins, for whom he went 4-for-29. Luna's last home run before Wednesday, oddly enough, was hit off another Cub, Jeff Samardzija, in this game. At least the Cubs won that one.

There was also an egregiously bad call that went against the Cubs in the fifth inning, when Shane Victorino was ruled safe at first base (replays showed he was out by a couple of feet). No run scored as a result of that play, but I'll just make my usual call for replay review and leave it at that.

Before the game the Cubs placed Lendy Castillo on the DL with a "groin strain" and recalled Scott Maine. Seriously, something ought to be done about the Rule 5 draft -- the Cubs will likely never admit it, but this appears to be a manipulation of the rules to keep Castillo. He's got talent, but was wasted sitting in the major league bullpen while he could have been continuing his development at Double-A. I'm not sure how I'd change the rules, but the ones they have now don't really help anyone.

Social Media Night was an enjoyable event. Hosted by the man who does the tweeting at @Cubs, Kevin Saghy, he had guests Carrie Muskat (@CarrieMuskat) and Bears kicker Robbie Gould (@RobbieGould09) talking about the use of Twitter by media and players, respectively. To sum up a presentation given in front of a crowd of about 300 fans, all agreed that the use of Twitter by teams, media and players is a way for them to engage fan conversations directly, and it seems much more important to all three in this fast-paced information age. The Cubs will sponsor another similar event on September 17.

Everyone who attended received a gift bag that included a T-shirt, a set of baseball cards containing one that was autographed (I got David DeJesus), and the world's smallest foam finger, shown here next to a Starlin Castro autographed ball (not from the event, I got this elsewhere) for perspective: 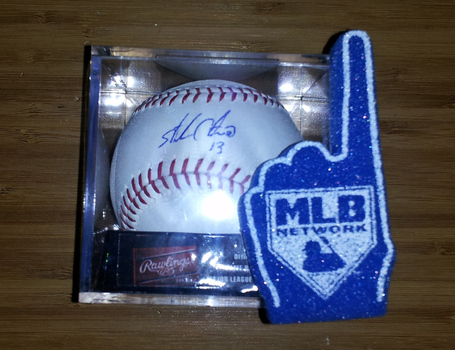 I can think of a finger to put that on after Wednesday night's loss.