The Fog Of Victory: Cubs Use Three Homers To Beat Braves 5-1

Share All sharing options for: The Fog Of Victory: Cubs Use Three Homers To Beat Braves 5-1

And I thought we had weird weather at Wrigley Field last year.

After an all-night and most-of-the-day rain in Chicago, it finally cleared about 4 p.m. and not long after the gates opened at Wrigley Field, the sun actually came out, providing this view of a nice sunset that I tweeted just before 8 p.m. Monday night.

By the seventh inning fog was rolling in, and by the time Carlos Marmol took the mound in the eighth -- to scattered boos that got a lot louder after he walked the first two men he faced -- the fog was thick enough that the infield was getting a little murky from my view in the left-field corner.

Fortunately, none of that prevented the Cubs from their second straight win, 5-1 over the Braves, powered by three home runs -- one each from Bryan LaHair, Ian Stewart and Geovany Soto, the last of which provided some insurance runs in the eighth inning.

The Cubs have now won three of four on this homestand, all against teams that were near or at the top of their divisions coming in.

Jeff Samardzija threw yet another solid game. He gave up a solo homer to Jason Heyward in the second inning, but after that, allowed just four more hits, all singles. It's still early in the year, but Shark appears to have figured things out. He's got four outstanding starts out of six, and only one that you could categorize as "bad"; he's given up just two home runs in 38⅔ innings, and gotten his command harnessed, too, with 12 walks and 39 strikeouts.

Keep up the good work. Looks like I was wrong about him, too.

LaHair's home run was his eighth -- most among all major league first basemen. He also started a slick double play in the seventh inning, Samardzija's last, when the Braves were threatening; with runners on first and second, he snared a line drive off the bat of pinch-hitter Eric Hinske and doubled Heyward off second base to end the inning.

Stewart and Soto, both off to slow-to-bad starts, homered as well; Stewart also walked and got his BA up to .208, still not good, but at least headed in the right direction. Soto had a single in addition to his homer. All told, the Cubs knocked out nine hits and drew three walks.

Now, I know you'll want to talk about Marmol. I wasn't in favor of bringing him into the situation Monday night, up by just two runs. I realize that Dale Sveum likely has the intention of eventually moving him back into the closer role. But this soon? I think Marmol should be working his way back in lower-leverage situations for a while, not just four days after his blowup in Cincinnati. He didn't help matters with those two walks, but got out of it with a pair of strikeouts that actually looked pretty good.

Still, I wouldn't have done it. Shawn Camp was warming up during the second walk and was probably ready to go.

Then the fog really got thick; when James Russell came in to throw the ninth inning, no longer in a save situation, he gave up a leadoff double to Chipper Jones. After he struck out Heyward, Russell grooved one to Tyler Pastornicky, who hit a long drive into the fog. Tony Campana was one of the few people in the ballpark who saw it; he had it in his sights all the way and made a nice running catch near the warning track.

All in all, a nice win, even if parts of it weren't very visible. Here's a view of Wrigley from outside the bleachers after the game: 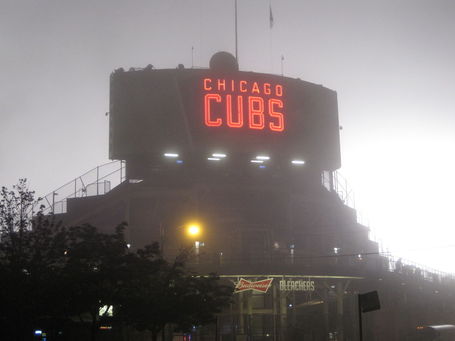 BCB photo by David Sameshima. Click on photo to open a larger version in a new browser window.