The Cubs released two drawings that show what their new spring training stadium, to be shared with Arizona State University, will look like.

As you know, the Cubs will be playing their final spring training season in HoHoKam Park in 2013, while their new complex, to be located at the intersection of Loop 101 and Loop 202 in Mesa, is under construction. That new complex, with a yet-to-be-named stadium (I'd expect naming rights to be sold), will be open for spring training in 2014.

Today, it was announced that the Cubs will have an official groundbreaking event for the new complex on July 11.

The stadium, which will be shared with Arizona State University's baseball team, will be designed and built to quickly allow for transition to ASU when there are games for both the Sun Devils and Cubs on the same day; it'll have electronic billboards so that both teams can feel at home, as well as an electronic scoreboard (looks like a replica of the Wrigley board). Seating capacity will be 15,000 -- which would be the largest in the Cactus League, maybe even a bit too big for most spring games..

Above the left-field berm, you can see there will be a party deck and bleachers (similar to what's been built at Wrigley Field this year). After the jump, another drawing that shows there will be quite a bit of shade, at least equal to and possibly more than at HoHoKam.

More renderings will be released at the July 11 groundbreaking; here are statements from the city of Mesa and the Cubs:

Here's another rendering of the proposed stadium; click on it to open a larger version in a new browser window. 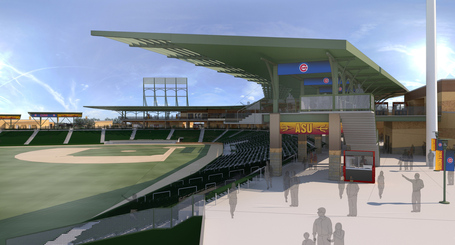