Barring any miracle run of wins or losses by any of those teams, it looks like the Cubs are pretty well set for the No. 3 pick in next year's draft, although they do have six games remaining with the Rockies (and haven't won a single game in a NL West park this year).

That's what we have to look forward to, although a couple more wins in this series against the Astros wouldn't be bad, either.

This morning, BCB's own ballhawk was over by Wrigley Field and spotted something unusual: 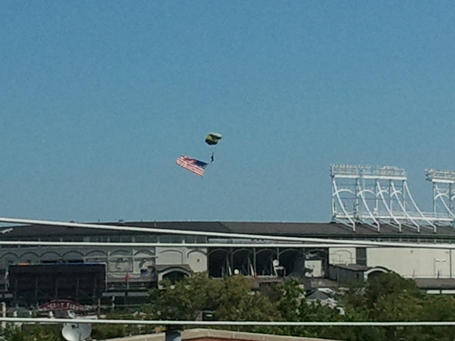 A practice run for tonight's pre-game? Haven't heard anything about this. Practice for this weekend's air show? Guess we'll find out this evening.

At first, I thought that had to be a misprint -- Brett Wallace is a first baseman, right? Turns out he's started several games at third base this month, with Scott Moore at first base. That... doesn't seem real good for the Astros defensively. We'll see what happens. Wallace was originally a third baseman in the minor leagues and played over 200 games there, including 47 this year in Triple-A.

Progress! Last Thursday's start by Chris Volstad against the Reds was the first of his 11 starts this year that the Cubs did not lose, even though he himself did not get the "win". Better news: he's now put together two solid starts in a row. He last faced the Astros July 10, 2011, but that's largely irrelevant because almost no one who played for Houston in that game is still on the team. Current Astros are 11-for-43 (.256) against him with one home run (backup catcher Chris Snyder).

Lucas Harrell made two relief appearances against the Cubs when he was a member of the White Sox; he's never started against them. Current members of the team have exactly two at-bats vs. Harrell: Luis Valbuena (0-for-1) and Alfonso Soriano (1-for-1). You know what happens when the Cubs face pitchers like this. Clearly, etc. etc. etc.

Today's first pitch thread will post at 7:05 p.m. CDT and the overflows at 8:05, 9:05 and 9:50 p.m. CDT. If you need more overflows due to extra innings or rain delays, post them in the fanshot section. Also please note: due to some under-the-hood changes, the sidebar box with the game thread links is no longer available. It seems you've found them with no problems, but if you haven't been able to find the overflow threads, click the "Chicago Cubs Game Threads" link under "Sections" on the left sidebar. They're all in there.