Share All sharing options for: Cubs Lose To Reds As Starlin Castro Reported To Have Contract Extension

The Cubs actually scored a run off Aroldis Chapman in the ninth inning in Saturday's first game, the makeup game from a May 1 rainout. That's more impressive than you might think. Since June 26, in 23 appearances covering 22⅔ innings, Chapman had allowed nine hits and three walks -- that's a WHIP of 0.529 -- and zero runs, with 45 strikeouts. Put another way, Chapman had faced 82 batters during that span and struck out 45 of them.

Saturday afternoon, Alfonso Soriano singled with two out in the ninth and Starlin Castro walked. That in itself is impressive, given the three walks in 82 batters prior to today in the above-mentioned span for Chapman, combined with the fact that Castro had walked 21 times (three intentional) in 502 plate appearances before that one.

Welington Castillo drove in the run with a single off Todd Frazier's glove, but then Joe Mather struck out to end the Cubs' 5-3 loss to the Reds, their ninth consecutive road defeat.

Soriano had homered in the first inning after David DeJesus was hit by a pitch, giving the Cubs a 2-0 lead, but as has been so common, it did not last. Jeff Samardzija didn't walk anyone today, but gave up three home runs -- including two (Xavier Paul, Miguel Cairo) to hitters who had not hit one this year.

Progress was also reportedly made in the process to give Castro a contract extension. More on that, and information on the night game of this split doubleheader, after the jump.

ESPN Chicago is reporting Castro has signed a seven-year extension:

Starlin Castro has agreed to a seven-year, $60 million contract extension with the Chicago Cubs, a source close to the star shortstop told ESPNdeportesLosAngeles.com.

The contract covers four years of arbitration eligibility and three years of free agency, and includes a $16 million option for 2020. Castro, 22, was projected to qualify for salary arbitration as a "Super Two" player at the end of the year.

If Castro continues to progress into the perennial All-Star we hope he can be, this deal will be an outstanding bargain for Theo & Co. as they build from the bottom up. Next up: a deal like this for Anthony Rizzo, maybe a year from now.

Caveat: no official announcement has come from the Cubs on this, and these two tweets are instructive:

Theo says nothing finalized on Castro contract. Beyond that no comment.

Theo, Starlin say extension is not finalized yet. But Starlin did hear about the numbers: "I like it."

I'll bet he likes the idea of possibly earning $76 million!

Meanwhile, I spent most of the afternoon at Wrigley Field watching the Under Armour All-America high school game, featuring some of the best high school players from around the country. Many of these kids will be in next year's draft class; among them was Kacy Clemens, son of Roger; he both pitched an inning (quite effectively, and fielded his position well) and came to bat: 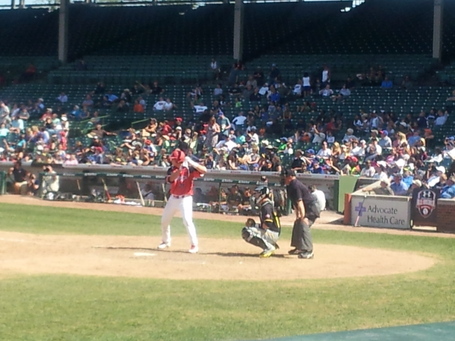 I heard Roger Clemens was at the game; he was spotted beforehand signing autographs, but I did not see him myself.

This is Corey Ray, from Simeon High School in Chicago; he had a large cheering section at the game, which was attended by about 3,000: 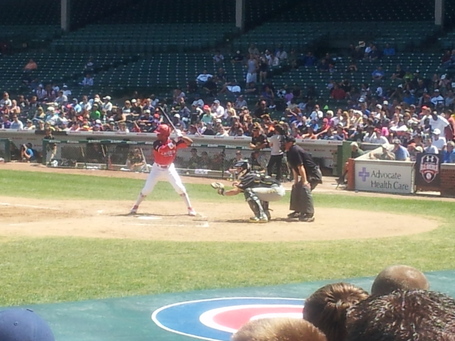 It was fun to watch, and the planes from the Chicago Air & Water Show buzzed Wrigley as well, a number of times, at times making play stop while the players watched. The play was occasionally ragged in the field, but at times near major-league quality, at least pitching-wise; they had the speed meters working and a number of the pitchers were throwing 90, 91 MPH.

The second Cubs/Reds game will start at 6:10 p.m. CDT and be televised on CSN Chicago. Here's the pitching matchup:

Brooks Raley made progress in his second major-league start, also against the Reds, last Sunday at Wrigley Field, throwing six solid innings. He did allow a pair of home runs, to Jay Bruce and Ryan Ludwick. Still, if he can build on that start, the Cubs will have someone else to throw into the starting-pitcher mix for 2013. Raley is here today due to the new rule that allows a 26th man to be added to the roster (with no one removed) for doubleheaders. He'll head back to Iowa after the game, but likely will be recalled (with Michael Bowden sent back down) to return to the rotation later in the week.

Todd Redmond is making his MLB debut tonight. You know what usually happens when pitchers do that against the Cubs. Redmond is an eight-year minor-league veteran of the Pirates, Braves (thus the cap in the photo; he was acquired by Cincinnati in July in the Paul Janish deal) and Reds systems; an interesting note about him is that he has been on major-league 25-man rosters three times before this without ever appearing in a game. That note becomes moot after tonight with his start. One last thing: the start by Redmond is the first by a Reds pitcher other than their five-man rotation (Cueto, Mat Latos, Bronson Arroyo, Homer Bailey and Mike Leake). They'll be the last MLB team this year to use a sixth different pitcher to start a game. (The Cubs have had 10 different pitchers start games this year.)

And, the lineups, first, for the Cubs: