Share All sharing options for: Cubs Swept By Dodgers As Two Debut; Also, Report From Peoria

So. Anything happen while I was spending the day watching the Cubs' Midwest League affiliate in Peoria?

Figures, this would be one of the busiest days of the year, with Jeff Baker traded to the Tigers, Tony Campana shipped to Iowa (I suspect, apart from a September recall, he might be done as a major leaguer), and Brett Jackson and Josh Vitters recalled to make their major-league debuts.

Then the Cubs played a wild, back-and-forth game with the Dodgers, one that had four lead changes before LA's Hanley Ramirez singled in the winning run with runners on first and third and one out in the bottom of the 10th, completing a three-game sweep over the Cubs, 7-6. Which raises the question: why would you ever pitch to H. Ramirez in that situation? Set up a force at the plate and pitch to Juan Rivera -- kind of a no-brainer. But Dale Sveum pitched to Ramirez, and he hit Shawn Camp's first pitch for the game-winner, and the Cubs' fifth consecutive defeat. It was also their 11th straight loss in a NL West stadium, dating back to the end of last year.

It was a successful debut for Jackson, who went 2-for-4 and scored a run. He struck out once; that's been happening a lot in Triple-A, as you know. If he can cut down on that in the major leagues, he can be a long-term starter at Wrigley Field. I don't quite understand what I heard about Vitters -- that he'll platoon? What's the point of that? Luis Valbuena is hitting .195. Put Vitters in the lineup for two months and see what he can do. Valbuena's a bench player.

Justin Germano, who is no kid -- he turns 30 Monday -- had another good outing. Eventually, maybe Sveum will allow him to throw more than 80 pitches in a game. Who knows, maybe it's possible for him, even at 30, to become a capable back-of-the-rotation starter.

Meanwhile, Anthony Rizzo... man, he's good. Another homer today, his ninth, tied the game in the ninth, and he also made a couple of nice plays defensively. Props also to Welington Castillo, for a monster home run that briefly gave the Cubs a 2-1 lead in the sixth. I got to hear more than half the game (by time, anyway) in the car on the way back from Peoria.

Speaking of which, follow me past the jump for a recap of that game.

It was a gorgeous, perfect, sunny day for a ballgame at O'Brien Field in Peoria, 80 degrees at game time and low humidity. 2,023 showed up to see the Chiefs drop one to the Clinton Lumber Kings 3-2. The Lumber Kings are a Seattle Mariners affiliate. 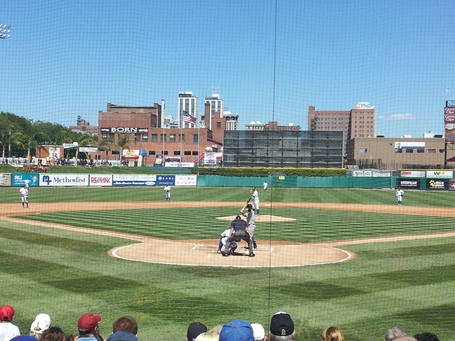 Michael Jensen started for the Chiefs. Jensen, drafted in the 26th round in 2011 out of Hartnell College in Salinas, California, barely pitched last year, so this is really his first year of pro ball. He threw five very nice innings, holding Clinton to five hits and a run, and striking out four. He might have gone farther than that, but something you'll see at this level, showing the difference in ability, dropped foul popups, extended at-bats that should have produced outs. 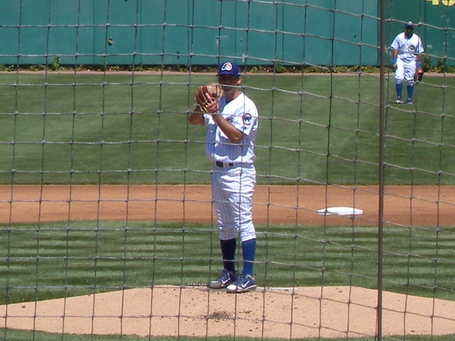 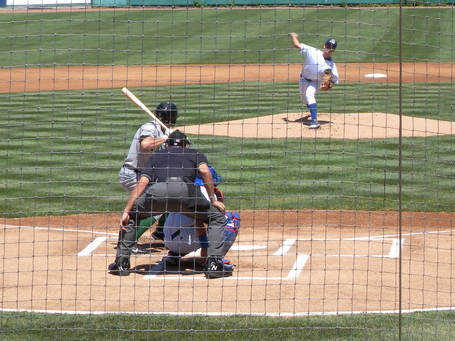 Sheldon McDonald relieved Jensen and threw two scoreless innings; meanwhile, the Chiefs took a 2-0 lead in the fourth on some shoddy fielding by Clinton. The Lumber Kings made three errors in the inning, sandwiched around a double by Tim Saunders (who just got assigned to Peoria from Daytona when Javier Baez was recalled). But Peoria had just one more hit the rest of the afternoon; 15 of the final 16 Chiefs were retired, nine by strikeout.

Austin Reed gave up the two runs that won the game for Clinton in the eighth; he gave up three hits in the inning, including a double that smashed off the right field wall by Kevin Rivers.

Then Matt Brazis came into the game and shut things down. Here's where you can't figure where a draft pick is going to go. Brazis was selected in the 26th round this past June out of Boston College. The Mariners assigned him to the Appalachian league, where he thres 8⅓ innings (25 outs recorded), gave up one hit and struck out 19.

OK, too good for the Appy League. In three appearances in the Midwest League, he's thrown 5 innings and struck out nine, including four of the six hitters he faced today. His fastball really popped -- sitting 11 rows behind the plate, I could clearly hear the difference between Brazis' fastball and the other pitchers today. He'll turn 23 next month, and I'd expect the Mariners to start fast-tracking him.

I was most interested in seeing Zeke DeVoss, but he went 0-for-4. Wes Darvill, who I saw play in a couple of spring-training games, was 1-for-4. Here are some photos of them in action: 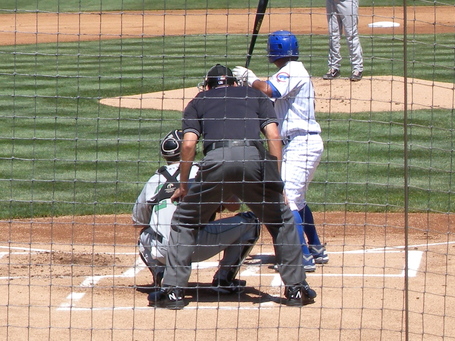 Look how closely DeVoss crowds the plate. Here's another, with a pitch about to reach him: 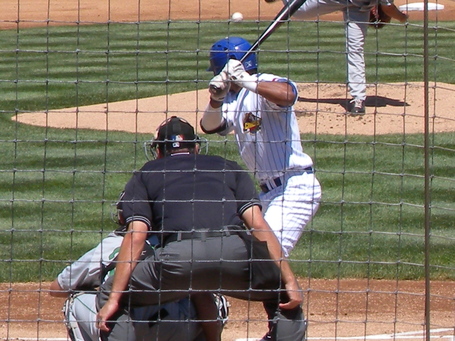 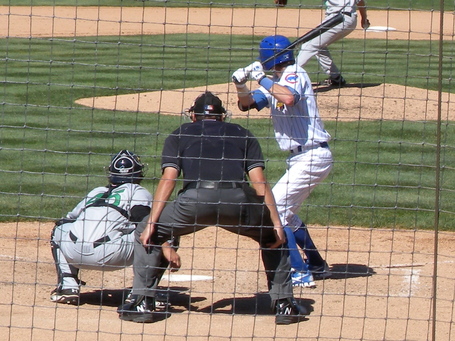 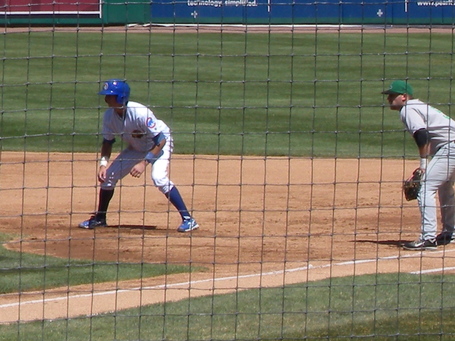 There were, as is the custom in Low-A, just two umpires. The plate umpire, a really tall dude (maybe 6-4 or taller) named Luke Engen, had a delayed strike call that had several hitters throwing their bats away on 3-2 counts only to be called out on strikes. One of them, Clinton catcher Michael Dowd, started to argue vehemently after his called K, and Engen tossed him. You shouldn't do that as a player at any level, but really, umpires need to make prompt calls. The calls were delayed enough that I could understand why a hitter would think he had walked.

There's one more thing. Not long after I walked in, I was approached by one of the young women you see at these games who work the between-innings entertainment, asking me if I wanted to take part in one. I thought, "Hey, I'm only here once, why not?" She seemed thrilled, since she said almost everyone else had said no.

So after the fifth inning, I wound up on the field in a sort of "musical chairs" thing where five of us walked slowly around five inflatable "lottery" balls numbered one through five. When the music stopped, we were supposed to sit on the ball closest to us; whoever was on the numbered ball shown on the scoreboard won lottery tickets for his or her entire row.

Well, guess what. I won. There were about six people in the row I was in; they gave the others one lottery ticket, and I was the winner of five Cubs Illinois scratch-off lottery tickets. Haven't scratched them yet. If I'm not here tomorrow...

Nah, it's not that much. The top prize is $25,000. Not chump change, but not enough to give up this gig, either. It was fun, as was the entire day. Saw part of the Cubs' future as two other parts were taking the field in Los Angeles. It may take a while, but some of the future is already here, and much of the rest looks as bright as the sun shining on Peoria Sunday.