Share All sharing options for: Cubs Lose To Nationals, And Watching Jorge Soler

The Cubs lost to the Washington Nationals 2-1 Monday afternoon in Washington. This should not surprise you in the least; the Cubs came in with the second-worst record in baseball, and the Nats tied for MLB's best.

This was the one game the Cubs had the best shot at winning in this series -- I don't expect them to win at all in DC -- with Jeff Samardzija on the mound. Shark did not disappoint; he had yet another good outing, allowing just seven hits and a walk and striking out eight. Unfortunately, one of the hits was a home run by Adam LaRoche; the Nats nursed that 1-0 lead into the eighth, when Jeff Beliveau relieved Samardzija. Shark had thrown 108 pitches and Dale Sveum pinch-hit for him in the top of the inning.

Beliveau promptly gave up a single to Bryce Harper (this was Harper's first-ever game against the Cubs) and a double to Ryan Zimmerman. Presto! 2-0 lead. This turned out to be important when Anthony Rizzo singled in the ninth, took second on defensive indifference and scored on a Welington Castillo single. That's one of the only times I've ever seen a runner move up that way in a game that was that close and actually score.

It wasn't enough; the Cubs dropped their third straight game. Meanwhile, I was out at Fifth Third Bank Field in Geneva watching some of the Cubs' future, including Jorge Soler.

In the top of the fifth inning of the Peoria Chiefs' eventual 6-2 win over the Kane County Cougars, Peoria catcher Yaniel Cabezas hit a three-run homer, his first for the Chiefs and just his second professional homer.

Cougars pitcher Michael Giovenco drilled Chiefs left fielder Oliver Zapata in the left elbow with his next pitch, clearly in retaliation. Plate umpire David Rackley tossed Giovenco, despite the protests of Cougars manager Brian Buchanan. I'm not a big fan of this kind of retaliation; perhaps Giovenco just wanted to make a purpose pitch and it got away, hitting Zapata.

Later in the game, Jorge Soler got the treatment, too; he was hit in almost the same spot by Cougars reliever Malcom Culver. Neither hitter was seriously hurt. Chiefs shortstop Wes Darvill also got drilled in the eighth inning, on an 0-2 pitch. Earlier in the game, Soler drew a walk, hit a sharp line drive to left field that was caught, and singled up the middle. No monster home runs for Soler on what was the final day of the season for the Cubs' Midwest League affiliate in Peoria, and from what we've heard, likely the last day for Peoria as that affiliate. It's ironic, then, that they finished the season at Kane County, likely to be the home for Cubs prospects in the Midwest League once the team finally gets an affiliation agreement signed. This should happen around mid-September -- when the discussions can officially take place -- and the Cubs might be subject to a fine of as much as $1 million for talking about affiliation-switching before the middle of this month.

Apart from Cabezas and Soler, center fielder Pin-Chieh Chen tripled and singled and scored a run; starter Ben Wells threw two-plus innings and escaped unscored-upon when reliever Willengton Cruz got out of a bases-loaded, nobody-out jam with a popup and a double play. Cruz threw 4⅔ solid innings; the only hit he allowed was a two-run homer by Cougars catcher Kenny Swab that followed a walk. Chiefs third baseman Tim Saunders, who's come out of nowhere (12th-round pick this year) to have a solid year putting him in prospect status, made two errors for the only other baserunners Cruz allowed.

I was a guest today in one of the stadium suites, for which I'm grateful for the invitation; the suites are quite nice, spacious, with good food and satellite TV on which I watched the Cubs game until the game in front of me began. The announced attendance was 5,472, not bad for a warm holiday afternoon, although it didn't seem like that many were in the stands. The stadium was built in 1991, and extensively renovated in 2008; that included the addition of the suites and party patios in the outfield (though the patios were empty Monday). They've got a small video board that mostly exhorts fans to chant, and runs advertising; the main scoreboard with the game score in left field, malfunctioned a couple of times during the game, showing the score as Cougars 30, Chiefs 1, before it was finally shut down.

But that was just a minor glitch. It will, presuming the deal goes through, be a fine location for Cubs prospects in 2013 and beyond; from my house on the North Side of Chicago it took about 50 minutes to get there (and yes, I know that would be longer on weekday evenings during rush hour).

Here are some photos I took at the game, the first a wide view of the entire park, the others of Jorge Soler at bat and on base. Click on the photos to open larger versions in a new browser window or tab. 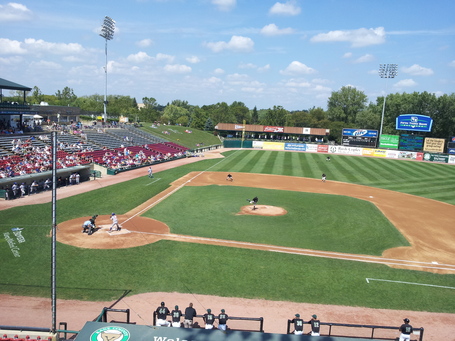 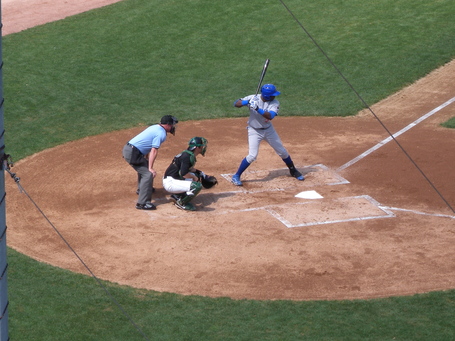 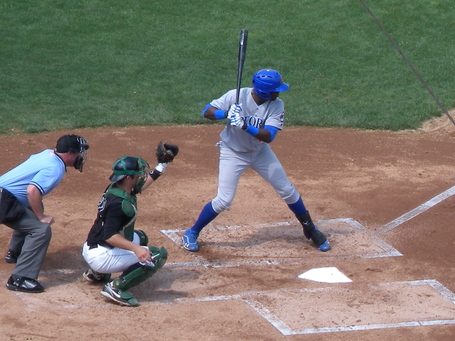 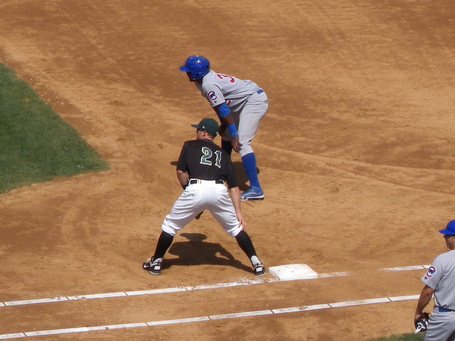