The Cubs are 8-26 since August 1. They have been outscored 187-125 in that span (that's the equivalent of losing every one of those games 6-4). They really don't have much hope at all of winning this one, either.

So what do you want from me? Puppies and rainbows? Cute kittens? Matt Murton on a unicorn? OK, that I can provide: 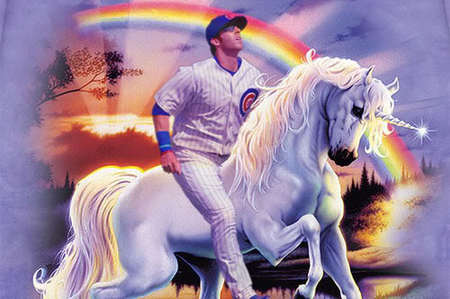 I think I'll tell you another story out of history. 40 years ago this month, a career minor leaguer got to play in his only five major-league games, for the 1972 Cubs. Talk about Quad-A -- this guy did draw a lot of walks early in his minor league career, but spent six years in Triple-A with just the one cuppa coffee. His name was Al Montreuil -- he was a second baseman. He started three of the games he played and was a defensive replacement in the other two. He went 1-for-11 and never appeared in the majors again.

The reason I remember him is that Jack Brickhouse had no idea how to pronounce his name -- Montreuil was from Louisiana, probably a Cajun from way back, and his name should have been pronounced, French-style, "mon-TROY", or something close to that.

Brickhouse called him "Al Montreal." Yes, pronounced like the city.

Sometimes, all we have are the old stories.

The last time Justin Germano faced the Nationals was more than five years ago: June 2, 2007. Only Ryan Zimmerman is still on the team. Current Nats are 3-for-6 with a home run off Germano (Jayson Werth). Seriously... Germano's a placeholder. You really expect him to get this team out? Doomed.

Jordan Zimmermann gave up a pair of runs (one unearned) to the Cubs April 8 at Wrigley Field and lost despite throwing seven good innings. It's the only game the Cubs have won against the Nats this year. They've been outscored 34-16 in the six games so far. You don't really expect a different result tonight, do you? Doomed.

Today's first pitch thread will post at 6:05 p.m. CDT and the overflows at 7:05, 8:05 and 8:50 p.m. CDT. If you need more overflows due to extra innings or rain delays, post them in the fanshot section. Also please note: due to some under-the-hood changes, the sidebar box with the game thread links is no longer available. It seems you've found them with no problems, but if you haven't been able to find the overflow threads, click the "Chicago Cubs Game Threads" link under "Sections" on the left sidebar. They're all in there.