There is just one possible explanation for the Cubs' 12-2 win over the Pirates in Pittsburgh Friday night: The teams must have switched bodies before the game, Invasion-Of-The-Body-Snatchers style. How else could you explain a game in which:

It makes no sense at all. The Pirates looked like the team heading to 100 losses, and, at least for one night, the Cubs looked like playoff contenders. Alfonso Soriano drove in three runs and now has 91 RBI, his most as a Cub. He ranks sixth in the National League, behind five other guys who all could get some MVP votes (Ryan Braun, Chase Headley, Jay Bruce, Adam LaRoche and Matt Holliday).

The only negative from the game was Brett Jackson having to leave with a bruised knee after he ran into the center field wall making a catch of an Andrew McCutchen drive. He'll be OK, but probably won't play Saturday. Clearly, Jackson plays the game at one speed -- all-out -- and that's in general a good trait to have.

Bruce Springsteen also goes all-out in every show he puts on. Friday night's was no exception; a review after the jump.

Bruce Springsteen first wanted to play Wrigley Field during his first tour of outdoor baseball parks in 2003. At the time, the Cubs didn't have city permission to have concerts at Wrigley (the first was Jimmy Buffett's in 2005), so he played the Cell instead. I went to that show, and as all Bruce's shows, it was awesome.

This one was better. For one thing, I had much better seats, just to the right field side of the general-admission pit, probably the best seats I've ever had for a concert. You can hear a Bruce show from anywhere in the arena or stadium you're seeing it and feel the energy, but seeing him up close, you can feel the passion he puts into every song, even more than 40 years after he first got into the music business.

Bruce and the E Street Band are one of the few big-time music acts that aren't simply redoing the music of their past. They are still relevant, still writing and performing new material that speaks to the times; "Wrecking Ball" is as good as anything he's ever done, and songs like "We Take Care Of Our Own" will stand years from now as timeless classics.

The band lucked out on the weather, which threatened all day but never did more than a couple of sprinkles on a cool, but otherwise pleasant evening. He came on stage at 8:23 and played until 11:48 -- nearly three and a half hours, going virtually nonstop, slowing down only to introduce the band members (the usual band missing his wife, Patti Scialfa, who Bruce said was on tour with his daughter). Bruce was also joined onstage by Eddie Vedder and Tom Morello -- both of whom I suddenly found myself standing less than 20 feet from, as they came offstage to hang out with part of the crowd. Chris Chelios, Kerry Wood and Theo Epstein were also rocking with Bruce in my section.

As noted Friday night in this FanShot, Bruce paid tribute to Ron Santo by saying, "Are you missing anybody?", as a spotlight shone on Ron's retired number flag. That's... well, I don't really have words. He also paid tribute to the late Clarence Clemons during the show; Clarence's nephew Jake is on tour with Bruce playing sax, and though no one will ever replace Clarence, if you closed your eyes while Jake was playing, you could hear echoes of his uncle in his play. Jake is very, very, very good.

The band was far better than that. If you're going Saturday night, you will love this show, one of the best I've ever seen.

And here are a few photos (more at the BCB Twitter feed): 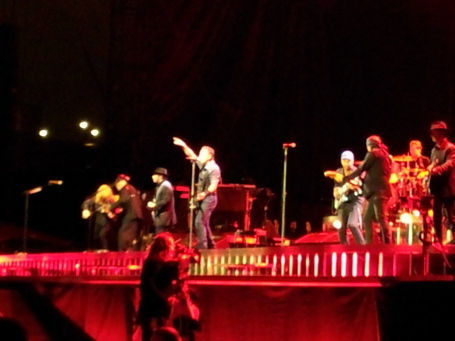 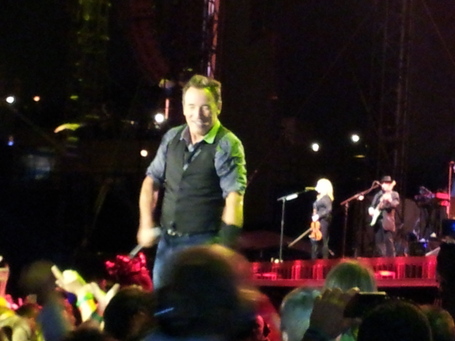 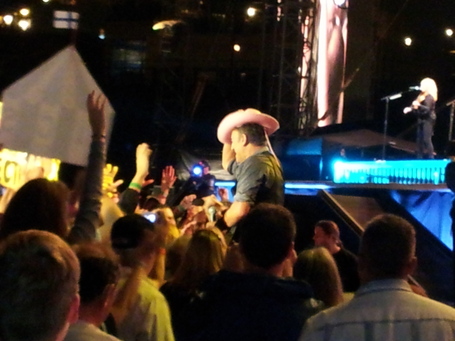 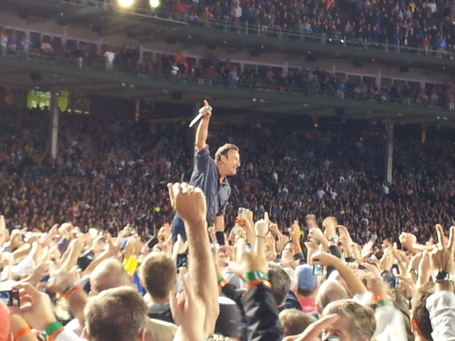