1967 produced cultural changes in American society, including the "Summer of Love" in San Francisco. In Chicago, though, people were falling in love with the suddenly-contending Cubs.

Share All sharing options for: A Game From Cubs History: July 2, 1967

Though the 1966 Cubs had tied the franchise record with 103 losses, there was a bit of hope from a near-.500 ending to that season. That hope grew in the first couple of months of 1967, when the Cubs got off to a decent start, hanging around the middle of the standings, about five or six games out.

Then June came, and the Cubs roared toward the top with a seven-game winning streak. After a loss to the Phillies, they won another seven games in a row. The sixth of those, the final game of a homestand, was a 4-1 win over the Reds July 2. Fergie Jenkins threw a complete game, running his W/L record (in the days when that actually meant something for starting pitchers) to 11-5, lowering his ERA to 2.72, and going 2-for-3 (a double and a triple) and driving in a run.

It's what happened after the game that makes this one notable. The win, coupled with a Cardinals loss to the Mets, put the Cubs in a first-place tie with St. Louis -- the latest in any season they'd been in the top spot in 22 years, since the pennant year of 1945.

The fans at Wrigley, who had waited out a couple of rainshowers for the victory, simply refused to leave after the game ended. George Langford wrote it up for the Tribune:

The Cubs scurried to their cave under the left field stands for cover, then kept creeping back to the entrance and peering out with looks of disbelief.

But the emotionally charged throng in Wrigley field yesterday just kept roaring and chanting, "We're No. 1."

One by one the Cubs returned and stuck their necks through the door to gaze amazed at the bedlam brought on by the Cubs' rise to first place. The band of urchins from the coal cellar of the National league had just barged to the top of the stairs and caused everybody in the joint to lose their grip.

Ron Santo, who was interviewed on a postgame television show, had to fight his way through the mob to the Cub quarters and when he staggered thru the dressing room door he looked like a man just off a three-day binge.

"Don't go out there," he warned his teammates, who wandered around almost stunned as a radio blared a description of the bedlam. "I'm lucky to get back here alive."

The reason the fans stuck around, beyond just the excitement of the day, was that they had decided to insist that the scoreboard operators move the Cubs flag on the scoreboard to the top spot. It took about 15 minutes of shouting and pointing, but the operators at last got the message and did so. Meanwhile, the 40,464 (36,062 paid) who were at the game could have been even more, wrote Edward Prell in the Tribune:

An estimated 10,000 were turned away yesterday when the Cubs, zeroing in on first place in the National league, scored their sixth successive triumph in a series final against the Cincinnati Reds.

Half an hour before game time, all tickets, including standing room, had been sold. Complicating the traffic jam around Wrigley field was Family day, an attendance gimmick recently put into practice, but certainly not needed on this day.

The Family day line on the Clark street side stretched north to Waveland avenue. Spectators started coming to the ancient park by 8:30 a.m.

Keep in mind, this was more than 45 years ago. People just didn't do that in that era -- show up at Wrigley for a regular-season Sunday game almost five hours to game time. It was a remarkable event, presaging similar lines over the next few years. The Family Day promotion -- discounted tickets -- accounted for the extra 4,402 not included in the official paid attendance. (Remember also, that until 1981, the Cubs held back 22,000 tickets for day-of-game sales only.)

The Cubs hung around first place for another month, tying the Cardinals again by defeating them in St. Louis July 24, 3-1, but an early-August seven-game losing streak knocked them out of contention. Still, the third-place, 87-win season was the Cubs' best since 1945, and hope was strong as they turned the page to 1968.

Here's the 1967 full scorecard image. Click on it to open a larger version in a new browser window or tab. 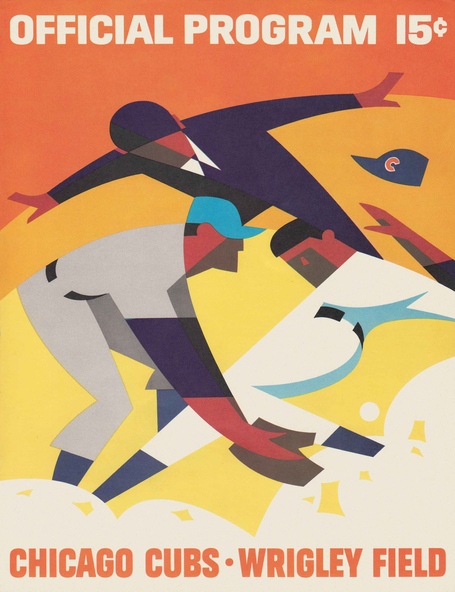