1968 was "The Year of the Pitcher"; run-scoring was at its lowest level in decades. Here's a typical game from the season, which also defined the year for future Hall of Famer Fergie Jenkins.

Share All sharing options for: A Game From Cubs History: June 16, 1968

You've probably heard quite a bit about 1968 being "The Year of the Pitcher". Things had been tilting that way since 1963, when the mound was raised and the strike zone expanded. It all came to a head in '68, when offensive output was the lowest since the Deadball Era.

It's that context that I want you to remember when I tell you about this game, and what happened to the Cubs in June 1968. They'd hoped to build on their strong 1967 season, but muddled around .500 until early June; on June 14 they were 30-29, five games out of first place. They then went on a 5-16 run and appeared dead in the water.

One of the games of that 5-16 run was particularly memorable, especially for Fergie Jenkins, who had burst on the national scene with his first 20-win season the year before. Fergie won 20 again in 1968 -- getting his 20th win in his final start -- and had a fine 2.63 ERA. But he could have won even more games. Jenkins was on the losing side of six 1-0 games in 1968. This is the story of one of them, a 1-0 loss to the Braves in Atlanta. Richard Dozer has the details from the Tribune:

Jenkins threw 10 innings that hot afternoon and allowed four singles and a double; he struck out seven. Pitch counts aren't available for that era, but you can guess he was probably in the 140-150 range. Keep in mind that pitchers in that era, unlike today, held back some of their best stuff for later innings. Now, pitchers go all-out from Pitch No. 1, knowing they'll probably be pulled after seven innings and 100-110 pitches. The only pitcher today who pitches like pitchers did in "the old days" is Justin Verlander, whose speed seems to increase as the innings go on. But Verlander is one of the best, if not the best, pitchers of his generation.

Almost no one pitches 10 innings in a game any more. It's been done just five times since 2000, and three of those games are accountable to Roy Halladay and Cliff Lee. So this 1-0 game from a pitcher-dominated season is something from a history book, likely never to be seen again.

The shutout was also part of a record Cub streak. They were shut out for the last eight innings of a 3-2 loss the day before Fergie's 10-inning stint, then blanked in four consecutive games covering 38 innings, and the first two innings of a 3-2 win in Cincinnati on June 21 -- 48 consecutive scoreless innings, a streak we hope we'll never see again. It took another couple of weeks of losing beyond that before the 1968 Cubs went on their strong second-half run

Here's the 1968 full scorecard image. It's the first cover drawing that shows a specific part of Wrigley Field's iconography, the brick wall and ivy. Click on it to open a larger version in a new browser window or tab. 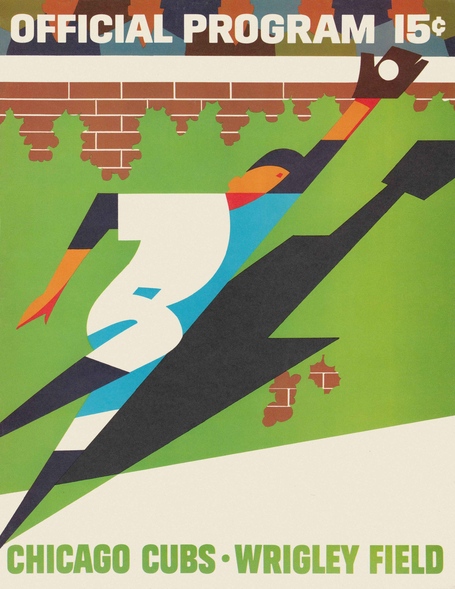