The Cubs tied two decades-old records with a blowout win on this spring Tuesday. A harbinger of things to come? Unfortunately, no.

1969. If you didn't live through this year, as I did, you've no doubt heard many things about it. It wasn't easy to select just one game from this star-crossed season that ended up in failure. What to choose? The Opening Day win with Willie Smith's 11th-inning walkoff homer? How about a six-run 10th inning in Cincinnati in June? Or even a couple of famous losses, such as a protested game in Montreal June 30 when Expos outfielder Rusty Staub claimed an Ernie Banks home run had gone under the fence and got it nullified. Or how about July 9 against the Mets in New York when Jimmy Qualls broke up Tom Seaver's perfect game with one out in the ninth?

No, I decided, those games have already had their due; I've written about several of them here before. Instead, I'm choosing a game from early in the season, this 19-0 win over the expansion Padres; it happened May 13 at Wrigley Field. The Cubs ran their record to 22-11 and were four games in first place in the then-new National League East.

Why this game? Because I think this one, played on a cloudy, 60-degree spring afternoon, was the one that finally convinced Cubs fans that their team was at last returned to the dominance it showed over the first 45 years of the 20th Century. George Langford summed up all the records the team set in that game, in the Tribune, using words that would never make it past editors today:

Ernie Banks, that cheerful humanitarian, instigated a massacre yesterday that would have elicited the admiration of all the Indians at the Little Big Horn.

It was Ol' Ern who fired the first shot and it was Dick Selma who neatly attended to the burials as the frisky Cubs turned against the San Diego Padres, rampaging to a 19 to 0 victory which equaled one club and one league record.

Banks triggered two three run homers and drove in a seventh run with a double. Selma allowed only three hits [two were infield singles by Rookie Jerry Da Vanon], won his first game as a Cub, and enabled the north siders' pitching staff to claim its third consecutive shutout, the first time the Cubs have accomplished such a feat since 1909.

And if Preston Gomez, the manager of the Padres, did not have a certain empathy for General Custer after Ernie's charge, Nate Oliver [who drove in four runs], Don Young [who hit a three-run homer], Billy Williams [producer of two triples] and Don Kessinger provided it.

It equaled the most lopsided shutout in National league history, a mark which was set by the Cubs when they defeated the New York Giants July 7, 1906.

Oliver, a spare-part infielder, hit just .159 that year; the home run and four RBI were his entire count for the season. It was Oliver's final major-league home run; despite spending the entire season on the roster and the Cubs desperately needing to give their regulars a break, he started only seven more games the rest of the year, one of those after the Cubs had been mathematically eliminated. Meanwhile, Banks' seven RBI (one of just three games in his career when he had that many) gave him 1,500 for his career, at the time that count ranked 17th in MLB history (his final career total of 1,636 currently ranks 29th).

It was a game that gave great hope for dominance that was never, unfortunately, to come.

Here's the full 1969 scorecard image; click on it to open a larger version in a new browser window or tab. 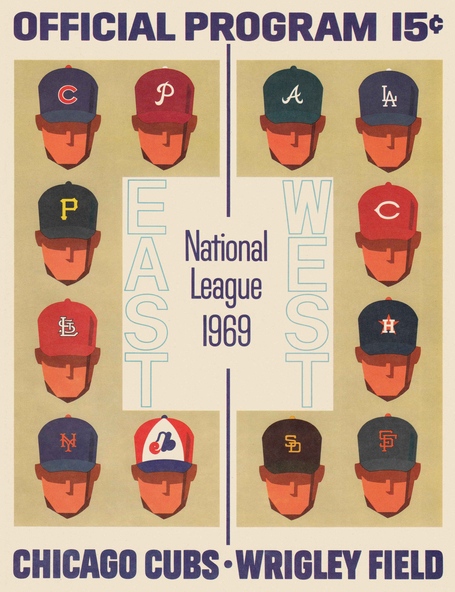