The Cubs had much the same cast return from the star-crossed 1969 season. Would 1970 be any better? It started out that way, but...

Share All sharing options for: A Game From Cubs History: September 13, 1970

All right, so 1969 didn't work out so well. But the Cubs still had Billy Williams and Ron Santo and Fergie Jenkins in their primes; they went and acquired Johnny Callison from the Phillies to try to bolster the offense; and optimism was high again as 1970 began.

The season started off well, too; just as in 1969, the Cubs roared into first place, this time with an 11-game winning streak after losing three of their first four. They stayed in first place until ... a 12-game losing streak dumped them to fourth. This was the year of the origin of the "June Swoon" that plagued Cubs teams that got off to good starts in many of the years of the 1970s.

The Cubs hung around, four or five games out of the division lead, before the Pirates had a stumble and the Cubs went on a 9-4 run. Still, heading into the playoff stretch, they could get no closer than one game behind Pittsburgh. The teams played their final series of the year on Sept. 12 and 13, an odd little two-game set after a Friday off day. The Cubs lost the Saturday game to drop two games behind, and were about to lose Sunday as well. They entered the bottom of the ninth trailing 2-1, and Callison (who didn't have nearly the year the Cubs hoped he would) and Paul Popovich grounded out.

Willie Smith -- hero of Opening Day 1969 -- was the next hitter. He lofted a routine fly ball to center field, where Matty Alou (yet another player whose name got Anglicized in that era; today, he'd be referred to by his real given name, Mateo), in the words of Jack Brickhouse, "camped under it".

Alou dropped the ball. It was as easy a play as you could possibly imagine, but Alou made an error allowing Smith to reach second base with the potential tying run. Ken Rudolph ran for him. (I know that sounds strange, considering Rudolph was a backup catcher who had not had a major-league stolen base attempt in his career, but Leo had already used a couple of the Cubs' better baserunners in that game and really had no one else.)

Somehow, this Cubs team managed to take advantage. Don Kessinger was the next hitter; he singled Rudolph in with the tying run. Glenn Beckert followed with another single; in those days, the Cubs seemed to play station-to-station baseball quite a bit, so Kessinger advanced only to second. Pirates manager Danny Murtaugh yanked starting pitcher Steve Blass -- remember, this was an era when most pitchers still completed games -- for lefty reliever George Brunet to face Billy Williams.

Billy singled sharply to left; Kessinger scored the winning run, and the Cubs closed to within one game of the Pirates (76-69 to 77-68) with a 3-2 win; there were 17 games remaining.

You'll notice there's no Tribune quote in this post. That's because the archive I've been consulting doesn't have one; I don't know if it's just missing, or if there wasn't one. I can tell you that I remember this day well. I was 14 years old and had gone riding my bicycle on that late-summer Sunday; I stopped in to a store that had TVs, and watched the ending of this game with astonishment and hope that maybe, just maybe, the Cubs could overtake the Pirates. One game out with 17 left? Entirely doable, right?

Well, of course you know it didn't happen. Part of the problem was the schedule, which had the Cubs not playing the Pirates again after that date, and also finishing the season on the road -- with a 14-game road trip, something no scheduler would ever do today. The 1970 Cubs were a good team at home, going 46-34, but were just 38-44 away from Wrigley. (The discrepancy in the number of games played home/away was apparently due to a Wrigley rainout being made up in the other city, something that was common practice in those days.)

Anyway, the Cubs somehow managed to keep pace despite being away from home. They took the first three games of a series in Montreal to stay within 1½ games of the Pirates with 11 games to go. After that win, Ron Santo was quoted in the Tribune:

Relaxed or not, Santo stopped hitting over the next week, going just 5-for-25 with one RBI (this, after he had hit .488/.556/.884 with five home runs over the previous 12 games) and the team lost five out of their next seven and were eliminated; the Cubs finished five games behind. The Pirates took the division with just 89 wins and were annihiliated by the Reds in the NLCS.

Here's the full 1970 scorecard image; click on it to open a larger version in a new browser window. 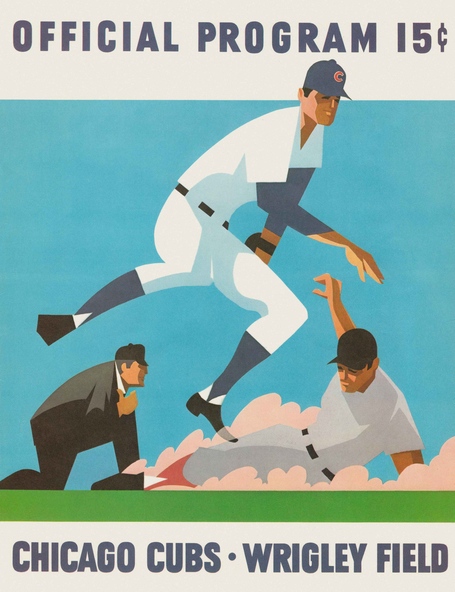