Cubs lefthander Kenny Holtzman made some club history in Cincinnati on this date.

Share All sharing options for: A Game From Cubs History: June 3, 1971

Leo Durocher was entering his sixth year as Cubs manager in 1971. Think about that for a moment: besides Durocher, since Frank Chance (who managed the best seven years in team history), just one other man has managed the Cubs for at least six seasons. That's Charlie Grimm, who had three separate stints totaling nine full seasons and parts of five others. (Since Durocher, the longest Cub managerial career belongs to Jim Riggleman: five seasons.)

Durocher had been brought on board to win. He hadn't, and grumbling was beginning from players, fans and media about him. By August, there was full-fledged mutiny:

Imagine the post and discussion here about something like that happening today! Before all that happened, though, Kenny Holtzman made some history for the Cubs June 3 in Cincinnati. George Langford's Tribune article has the details:

A couple of notes about the quote from Langford. "Modern history" refers to post-1900 baseball; Larry Corcoran, a 19th-Century Cubs pitcher, threw three no-no's, in 1880, 1882 and 1884, when baseball had quite different conditions and rules than it does today. Also, you'll note that for the first time, the word "Field" is capitalized after "Wrigley"; Tribune style was beginning to change.

In addition to throwing the no-hitter, Holtzman also scored the only run in the 1-0 win when he reached base on an error, advanced to second on an infield out, and raced home on a single by Glenn Beckert. At 25, you'd have thought Holtzman had many more years to be successful for the Cubs, but he demanded a trade after the season (his worst as a Cub), and Holland accomodated him by sending him to the Oakland Athletics for Rick Monday. Monday had five good seasons as a Cub, but that deal helped the A's reach the World Series three straight years.

Such is Cubs history.

Here's the full 1971 scorecard image; as in 1968, the artwork includes some iconic imagery of Wrigley Field, this time the scoreboard and bleachers. 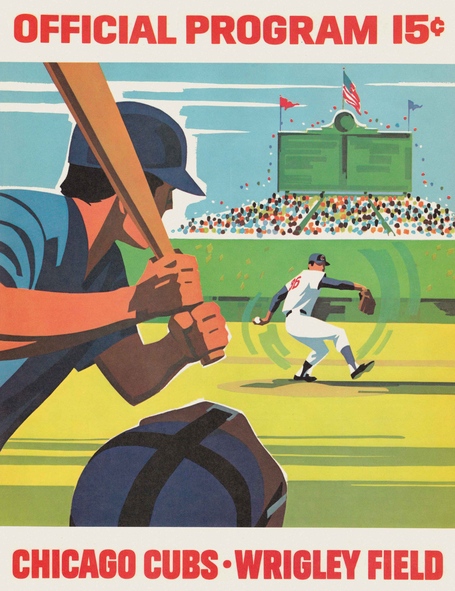