Two Cubs pitchers threw no-hitters in 1972. You've probably heard a lot about them. Here's the story of a game you might call the "anti-no-hitter".

Share All sharing options for: A Game From Cubs History: September 16, 1972

This isn't the game you probably expected to see here. The Cubs threw two no-hitters in 1972; that made a total of six in the 18 seasons from 1955-72 (Sam Jones, Don Cardwell, Kenny Holtzman twice, and Burt Hooton and Milt Pappas in '72). They seemed almost commonplace. In the 40 years since, there's been just one thrown by a Cub, Carlos Zambrano's in 2008.

Instead, here's a late-season game, long after the Cubs had given up any thoughts of a division title (the Pirates ran away with the N.L. East, finishing 11 games ahead of the second-place Cubs), which is sort of the antithesis of a no-hitter.

It was warm (77 degrees) with the wind blowing out at 20 miles per hour September 16, 1972 at Wrigley Field when the Cubs brought an offensive explosion to future Hall of Famer Tom Seaver and four other hapless Mets pitchers. It wasn't just the home runs hit that day by Cubs that the Cubs were laying on the Mets, though. Here, let George Langford of the Tribune explain further:

The "wishbone attack" was, of course, a college football formation that had become popular in the early 1970s. You'll also note the first Tribune usage of "18-5" instead of their previous style, which would have read "18 to 5". Hendricks, a longtime Baltimore Orioles mainstay, had been acquired by trade late that season by the Cubs -- for what reason, I'm not sure, because the Cubs were far out of contention. Hendricks' five walks helped him post a bizarre 17-game line in Cubs pinstripes: .116/.321/.279. After the season he was shipped back to Baltimore.

The 15 walks remains as the Cubs' team record for most in a game, and in fact, no team has drawn more than that in a nine-inning game since (it's been equaled seven times, last in 2000).

Rookie Dave Rosello also homered that day, in just his second big-league game. At the time, some thought Rosello, the first Puerto Rican position player developed by the Cubs to actually make the major leagues, might be a worthy successor to Don Kessinger or Glenn Beckert, but he never became even a good backup; he was eventually traded to the Indians for no one you've ever heard of. (Sounds familiar, doesn't it.)

Here's the full 1972 scorecard image; click on it to open a larger version in a new browser window or tab. 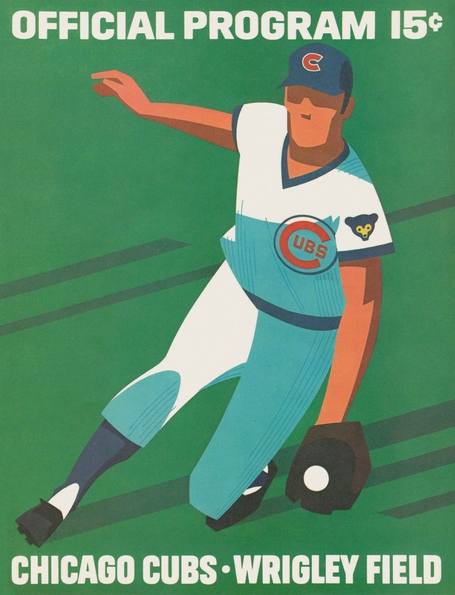