1973 saw the National League East have one of its worst seasons, with all six teams struggling to stay over .500. The Cubs, even after a summer of losing, had a shot at the title at the end... but failed.

Share All sharing options for: A Game From Cubs History: October 1, 1973

The longtime All-Star crew of the Cubs gave it one more shot in 1973. Ernie Banks had retired two years earlier, but Billy Williams, Ron Santo, Fergie Jenkins, Glenn Beckert and Don Kessinger were still starters, still (mostly) productive, and in the first half of 1973 roared out to an eight-game lead in the National League East, finishing the first half with a 48-33 record.

Of course, it didn't happen, and in spectacular fashion. Right after they defeated the Mets in the second game of a doubleheader July 1 to get to that 48-33 mark, the Cubs went on an 8-31 slide. Read that again: that's 31 losses in 39 games, and that included a three-game winning streak... and a few days later, an 11-game losing streak began that deposited the Cubs in fourth place, but just 5½ games out of first.

That's because the N.L. East in '73 was a wacky division that no one seemed to want to win. On August 31, the Cardinals were in first place... two games over .500, and the entire division, top to bottom, had just a six-game spread.

By September 22, when the Cubs defeated the Phillies 5-2 in 10 innings in Philadelphia, they trailed by just 2½ games with eight remaining... but were in fifth place. The Mets led, but were just one game over .500 at 78-77. It looked like the division could end in a multi-team pileup right at or around the .500 mark. That would have been fun, at least, if not very good baseball.

The Cubs took care of their own possible role in that pileup by losing three of their next four and going to the brink of mathematical elimination. But there were still four games to play, against the Mets at Wrigley Field, single games Friday and Saturday and a doubleheader to end the season Sunday, September 30, a DH necessitated by a rainout in May.

Rain in Chicago washed out both the Friday and Saturday games, so the teams were forced into back-to-back doubleheaders Sunday, and also Monday, the day after the regular season was scheduled to end. The Cubs, amazingly enough, had one chance left. If they could sweep the four games against the Mets and have the Phillies beat the Cardinals and Expos beat the Pirates (and the Pirates also lost a makeup game against the Padres), there would be five teams tied for the division lead with 80 wins and 82 losses.

Well. That would have been fascinating. The Cubs did win the first game of the September 30 doubleheader, but lost the second game and were eliminated, as were the Expos when the Pirates beat them. The next day, Pittsburgh was eliminated when San Diego won that October 1 makeup game, completed while the Cubs and Mets were still playing at Wrigley.

That left the Cardinals, at 81-81, the only possible team that could tie the Mets; it would require the Cubs to sweep the Monday makeup doubleheader. George Langford has the summation from the Tribune:

Between what happened in 1969 and the 1973 season ending this way, those of you who didn't live through this era should now have no doubt as to why those of us who did, will always hate the Mets. Incidentally, that "late morning" start -- 11 a.m. -- is, to my knowledge, the last time a game at Wrigley Field has started before noon.

The game, a 6-4 loss, is significant in Cubs history for another reason. It was the last time that star-crossed bunch who came so close to winning, but never did, played together. Fergie Jenkins didn't play in that game, but he, Glenn Beckert, Don Kessinger, Ron Santo and Randy Hundley (who also sat out that last 1973 game) were all traded before the 1974 season began. Only Billy Williams and Don Kessinger remained. Billy stayed for one last Cub season in 1974 before he, too, was traded away; of that now-revered group, he was the only one who ever played in the postseason (three games in the 1975 ALCS for the Athletics; he went 0-for-7). Kessinger played two more years in Cubs pinstripes before he was shipped to the division-rival Cardinals.

It truly was the end of an era.

Here's the 1973 full scorecard image. It appears the Cubs hired a different artist after 1972, because the drawings for '73 and the next few years were in quite a different style, to my eye not as interesting as the few previous. It appears to be another symbol of P.K. Wrigley's increasing disinterest in his team. Click on it to open a larger version in a new browser window or tab. 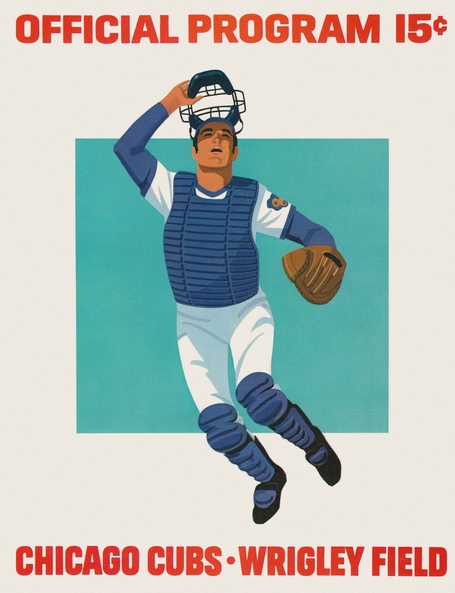