The Cubs were bad in 1974, the first of what were supposed to be rebuilding years. The season's final game summed up, in the way it ended, almost all of what it means to be a Cubs fan.

Share All sharing options for: A Game From Cubs History: October 2, 1974

This game might be the most Cub game in history, at least from our modern view of the team.

The 1974 Cubs had no chance to contend, given the multiple trades made before the season. Sure, there were still some decent players on the club -- Rick Monday, Jose Cardenal, Rick Reuschel -- and a solid acquisition in Bill Madlock, who finished third in Rookie of the Year voting. The pitching staff was just slightly north of horrendous; the 826 runs allowed were eclipsed, but just barely, by the awful Padres, who gave up 830.

The team sank to last place in the National League East in late July and stayed there; only a dead-cat-bounce six-game winning streak in mid-September prevented them from challenging the club record for losses. Meanwhile, the Pirates and Cardinals were having quite a battle for the division title, and the Cubs were going to have a say in who won, because they visited Pittsburgh for the final three games of the season, after losing two of three to the Cardinals in St. Louis. The Cards and Bucs were tied for the lead at 85-74; St. Louis visited Montreal, where they split two games. The Cubs, meanwhile, helped out the Pirates by losing the first two of their set.

Thus Pittsburgh led by one game going into the season's final day. The Cardinals and Expos were rained out in Montreal, which meant they would have to play a makeup game the next day if the Cubs could beat the Pirates.

The Cubs had a 4-3 lead with two out in the bottom of the ninth, and Reuschel had two strikes on Pirates pinch-hitter Bob Robertson; Manny Sanguillen stood on third base, representing the tying run. Neil Milbert of the Tribune tells what happened next:

Reuschel got out of the inning, but you know what happens next without me even telling you. The Cubs failed to score in the 10th, and the Pirates won it in the bottom of the inning after Reuschel was lifted. A one-out triple was followed by two intentional walks to load the bases, and Sanguillen won the game, and the division title, for the Pirates with a single.

Doesn't that just about sum up modern Cubs history?

Here's the 1974 full scorecard image; you can see there's once again been a nickel price increase. Click on it to open a larger version in a new browser window or tab. 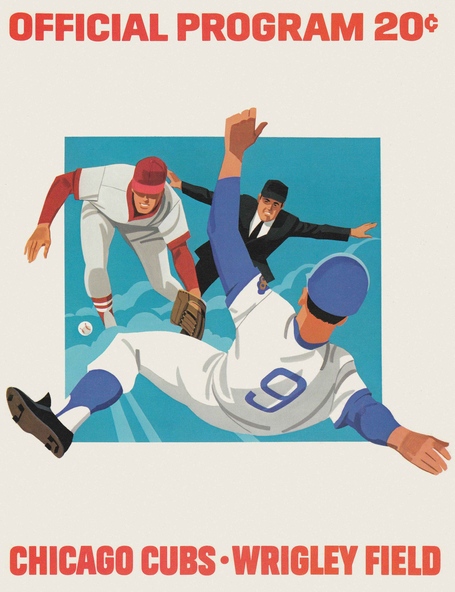