For two months the '75 Cubs played like playoff contenders. Then they remembered they had a horrific pitching staff, and flopped into a last-place tie with the Montreal Expos.

Share All sharing options for: A Game From Cubs History: June 3, 1975

That's what the Cubs gave us in 1975, pretending to contend. Coming off the rancid 1974 season, the North Siders roared out to a 7-1 start; they were also 13-5 and 20-10 early in the year and blew past everyone into first place in the National League East. Bill Madlock, in his second full season, would make the All-Star team (and be named co-MVP in the game) and win the first of two straight batting titles. Could the Cubs have rebuilt that quickly?

Just before they started that run, though, they had a come-from-behind 6-5 win over the Giants at Wrigley Field that had Tribune writers thinking pennant. Robert Markus:

You could forgive Markus' optimism, because, as the Tribune's Bob Verdi wrote, the game should probably have been lost:

Madlock did it singlehandedly, homering to lead off the bottom of the ninth to tie the game and hitting a game-winning single in the bottom of the 10th. That was after the aforementioned comedy of errors -- just eight of the 11 total runs scored were earned -- and a walk-fest by pitchers of both teams. The clubs combined for 17 walks, which likely accounts for the three hour, 25 minute length of game. Games were, of course, getting longer in the 1970s, but 3:25 still seemed extraordinarily long, especially for an extra-inning affair.

As noted above, this was just about the end of the Cubs' good play in 1975; they were 27-20 after this victory, but went just 48-67 the rest of the way. They might have had a shot at the postseason with better pitching; they scored 712 runs, ranking third in the league, and set a team record that still stands by drawing 650 walks (second in the NL). It was the atrocious pitching staff -- 827 runs allowed, dead last in the league by 88 runs, "highlighted" by a 5.22 relief ERA, by far the worst in the league -- that sunk the '75 Cubs.

Here's the full 1975 scorecard image; click on it to open a larger version in a new browser window or tab. 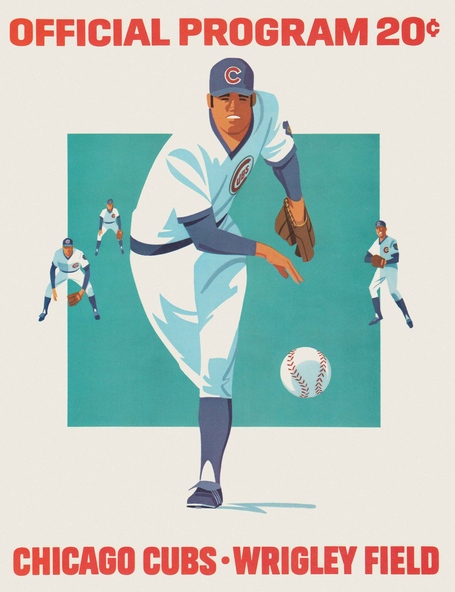