Mike Schmidt of the Phillies was one of the biggest Cub-killers during the 1970s. Here's one of his greatest games.

Share All sharing options for: A Game From Cubs History: April 17, 1976

1976 was a transitional year in Cubs history. Longtime general manager John Holland had retired at the end of the previous year... and was replaced by E.R. "Salty" Saltwell, who had been the team's treasurer and business manager. Saltwell had little knowledge of baseball and was derided as a "peanut vendor." One of the first deals he made was to ship out Andre Thornton -- who was the team's best hitter in 1975 -- for Steve Renko and Larry Biittner. Biittner provided some comic relief over the years, and Renko was traded to the White Sox a year later. It was a mostly-useless deal for the Cubs; it would have been nice to see Thornton at first base for the Cubs over the next decade or so.

In any case, the season was mostly a lost cause; the Cubs had just one winning month (August) and spent most of the year in fourth or fifth place, saved from a last-place finish by the horrific Expos, who went 55-107.

Before all that, though, the Cubs and Phillies played a game for the ages at Wrigley Field on a warm, windy, early-season Saturday. The Phillies won 18-16 in 10 innings after the Cubs had piled up an 11-run lead. That is a National League record for the biggest blown lead (are you surprised that the Cubs hold this mark?). Here's the rest of the story from the Tribune's Richard Dozer:

That's right, the Cubs actually had to come back with a three-run ninth of their own just to tie the game and send it to extras. This sort of thing happened frequently during in the 1970s at Wrigley Field, when windy, warm Aprils and Mays were common. From 1970 to 1980 there were 16 games in which both teams scored in double figures at Wrigley. The Cubs, naturally, went 4-12 in those games.

The "knocking down" of Cubs hitters that Dozer writes about refers mainly to Rick Monday, who got plunked by Wayne Twitchell after having homered twice earlier in the game (the Cubs had knocked former nemesis Steve Carlton out of the game in the second inning). Umpires managed to cool things off before a bench-clearing brawl could begin.

Fun, but ultimately meaningless in another losing Cubs year.

Here's the full 1976 scorecard image. This is a watershed drawing -- the first to break from the format of "OFFICIAL PROGRAM" with the price next to those words at the top and "CHICAGO CUBS WRIGLEY FIELD" at the bottom. It has the Cubs' centennial logo on the bottom right, and it's also the first to feature an African-American player on the cover, honoring Bill Madlock, who won the N.L. batting title in 1975 and would repeat his feat in 1976. For that, he got himself shipped to San Francisco before 1977 began. Click on the image to open a larger version in a new browser window or tab. 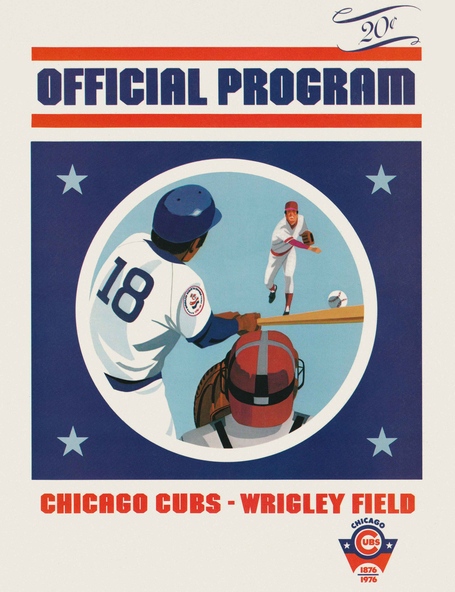