The Cubs and Reds played a game in late summer 1977 that, to this day, is one of the wildest and most memorable games ever played at Wrigley Field.

Share All sharing options for: A Game From Cubs History: July 28, 1977

Even though the 1977 Cubs had a new general manager (Bob Kennedy), a new manager (Herman Franks) and a number of new players acquired by trade, no one would have likely guessed that the 75-87 team from a year before would roar into contention by May. There were a number of games early on that year I could have chosen for this: the 23-6 win over the Padres May 17 (the last time, and one of only three times the Cubs have scored 23 or more runs in a game at Wrigley Field), or perhaps the 6-3 win over the Pirates May 28 that put the team in first place, and, as they had done 10 years earlier, the scoreboard crew put the Cubs flag on top of the standings... or this 4-2 win over the Expos in Montreal that put the Cubs 25 games over .500 at 47-22 (more on this later).

So I'm choosing the wild 16-15, 10-inning win over the Reds July 28. For me, that game epitomizes the entire crazy season. Bob Logan of the Tribune sums up the offensive prowess shown by both teams that afternoon:

The Chicago Cubs and Cincinnati Reds tangled in one of the most incredible, exciting, and entertaining games in the 61-year history of the vine-covered baseball shrine.It was unreal from start to finish, especially the Cubs’ 16-15 triumph in 13 innings after they trailed at various times by 6-0, 10-7, 14-10 and 15-14. Blend all that with 43 hits [11 of them homers] and 13 pitchers -- and pour it to 32,155 semihysterical witnesses over four hours and 50 minutes.

There's something of note in that quote: "the 61-year history of the vine-covered baseball shrine". First, that count doesn't include the Federal League's two years there -- that would bring things back only to 1916. Second, it shows how Wrigley was beginning to be viewed. The 1967 post in this series -- just 10 years' time before this one's story -- quoted a Tribune writer as calling Wrigley an "ancient park." But in 1977 it's a "vine-covered baseball shrine" -- quite a difference in terminology, perhaps due to the generational change in the fanbase from what Ridgely Hunt called in 1966 "superannuated men" to the Bleacher Bums of the 1970s.

Davey Rosello, who plays only when the Cubs have to go six deep for an infielder, found the hole he was looking for in the 13th inning Thursday.He found it with a slashing single through the cavity between third and short, and with this, the 24th Cub hit of the season’s wildest Wrigley Field melodrama, he drove in the winning run of a 16-15 Cub victory over the Cincinnati Reds.His was the third hit after two were out as shadows streaked the field. He was a player who was not supposed to be playing. His hit scored a pitcher who was not supposed to be pitching.

Rick Reuschel, having the best season of his career, made his second relief appearance of the year and got the win after his single started the winning rally. That was after the Cubs had hit two home runs to cut a 14-10 deficit to 14-13 in the last of the eighth, tied the game in the bottom of the ninth with a single, walk and single after the first two men were out, and tied it again with a one-out home run in the bottom of the 12th inning after the Reds had taken a 15-14 lead in the top of the frame.

Also, Bobby Murcer, who hadn't played the infield since he was a 20-year-old September callup for the Yankees in 1966, was forced to play both shortstop and second base -- rotating depending on what side the batter was hitting from -- after the Cubs ran out of other infielders. He alternated there with another outfielder, Jose Cardenal, who also hadn't played an infield position since the 1960s.

I was not at this game, but I remember well the look of pure joy on Reuschel's face as he crossed the plate with the winning run. My dad, who was hospitalized with back trouble at the time, was watching the game and told me he could hear cheering up and down the entire hospital corridor after Rosello's hit -- producing one of only nine RBI for him that season.

About that 25 games over .500 thing -- I've written about this before, but it bears repeating. Not all games were televised in 1977, and that late-June game in Montreal was one that wasn't. So I listened via WGN radio, after which Lou Boudreau exulted, "They can kiss the .500 mark goodbye!"

Here's the 1977 full scorecard image. The 1970s were known as an inflationary time; another five-cent increase in the price happened this year, along with the restoration of the year to the top line of the card. It's the first to put a drawing of an actual player on the cover, and an appropriate one, too, honoring Ernie Banks, who was inducted into the Hall of Fame that summer. Click on the image to open a larger version in a new browser window or tab. 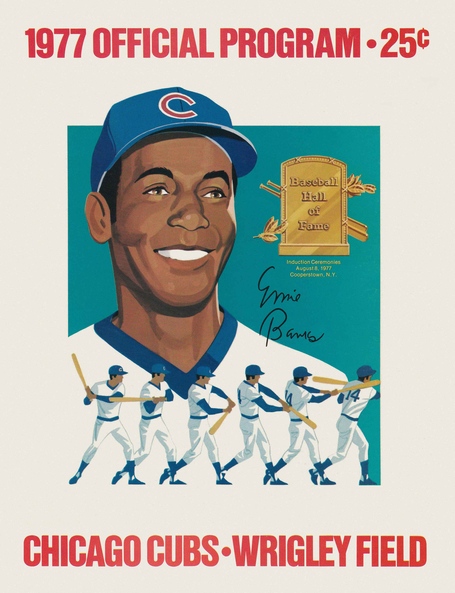