The Cubs added a power hitter in his prime in '78, but still finished second-to-last in the National League in home runs. Home run prowess, though, won the team one long extra-inning game in Los Angeles.

The Cubs made their first big signing of the free-agent era before the 1978 season when they signed Dave Kingman -- who had regularly terrorized Cubs pitchers as a visiting player at Wrigley Field -- to a three-year contract. Kingman had illusions that his presence would bring fans out to Wrigley; he had a $50,000 bonus written into his deal if the Cubs broke 1.6 million in attendance any year he was there (they did, just barely, in 1979, the year Kingman had his best season as a Cub).

There's a story, perhaps apocryphal, that Kingman wanted to add a further bonus for breaking the Cubs' team record for RBI. GM Bob Kennedy, knowing what this record was, readily agreed. Kingman then reportedly asked, "By the way, what is the team record?" Kennedy deadpanned, "One hundred and ninety."

Obviously, that didn't happen. But Kingman did bring to the Cubs some power they otherwise lacked; he slugged 28 homers despite missing 43 games. Unfortunately, few of the other Cubs could hit for power; no one else on the club hit in double figures and the team total was just 72,

Three of Kingman's 28 home runs in 1978 were hit May 14 against the Dodgers in Los Angeles; the second of the three tied the game with two out in the ninth inning and the third, a titanic blast that left the premises entirely, was a three-run game-winner in the top of the 15th inning of a game the Cubs won 10-7, taking five hours and two minutes.

I'm not using any Tribune quotes in this post because the best thing about this game was a postgame interview conducted by L.A. local reporter Paul Olden (who later worked at ESPN and is now the P.A. announcer at Yankee Stadium) with Dodgers manager Tommy Lasorda. "R" is Olden; "TL" is Lasorda:

That's 12 bleeps in one paragraph. Awesome.

The '78 Cubs ran into first place not long after that with an eight-game winning streak and held it for about a month. With little hitting -- it got nicknamed the "Rush Street Offense" (lots of singles, no action) -- the team, which somehow finished fourth in the National League in runs scored, ended up 79-83 mostly because the pitching staff failed (724 runs allowed, ranking 11th out of the then-12 teams).

Here's the 1978 full scorecard image; click on it to open a larger version in a new browser window or tab. Though there's no identification on the card, the player depicted does bear a resemblance to Kingman. 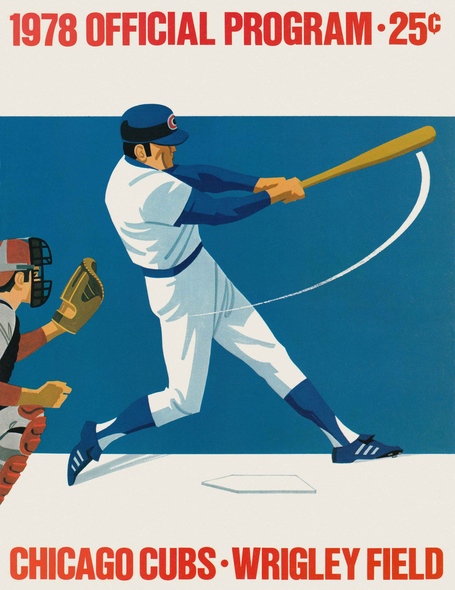