An airline strike and a brawl involving fans highlighted this game, which was suspended after nine innings. How did those two unrelated-to-baseball things happen? You're invited to one of the wildest Cub events of the 1970s, dear reader.

You're not going to read about that game here. Why? Well, it's already famous enough, I think, one of the most-talked-about games in the history of the franchise. By the time you're finished reading about the May 10 game against Cincinnati, I think you'll agree it was the one most worth memorializing in this series.

The nuts and bolts of this game: it began in the afternoon of May 10, was suspended after nine innings with the score tied 7-7, and was completed on the Reds' next visit to Chicago July 23, upon which they played nine more innings, with both teams scoring single runs in the 11th, and the Cubs finally breaking through and winning 9-8 in 18 innings on a Steve Ontiveros single. The Cubs went on to win the regularly-scheduled July 23 game 2-1 when Dave Kingman hit a two-run, walkoff homer with nobody out in the ninth. That would have made that day memorable enough, but it was how and why the May 10 game came to be suspended that was the story.

Here's how it came to pass. There were labor disputes affecting baseball in early 1979; MLB umpires were on strike (the May 10 and May 17 games both had sub umps), and there was also a United Airlines dispute that forced the Cubs off their usual charter flights onto regularly-scheduled commercial flights. May 10 was getaway day; they had announced before the game started that there would be a curfew of 4:30 p.m. so that they could make their flight to Houston at 6:30 p.m. They had originally been scheduled on a 9 a.m. flight Friday, but when Delta moved that time up to 8 a.m., GM Bob Kennedy opted for the Thursday evening flight in order to not make the Cubs wake at the crack of dawn to get to the airport.

Anyway, this all would have worked out fine if Steve Ontiveros hadn't made a baserunning gaffe in the third inning, according to Dave Nightingale of the Tribune:

If Ontiveros scores that run, the Cubs likely win in nine innings, make their 6:30 p.m. flight and everyone's happy. They did eventually win the game two months later, but despite the announcement of a 4:30 p.m. curfew before the game even began, some fans were extremely unhappy when it was stopped. Nightingale wrote of the postgame fracas:

Well. There's something you don't see in modern baseball. (Good thing, too.)

The 1979 Cubs featured Dave Kingman's best year with the team; he hit 48 home runs, leading the league. At the time it was the second-highest total in team history; he also led the NL in slugging (.613) and OPS (.956). The team never really got rolling and, unlike the previous two seasons, never occupied first place. They hung around, five games or so out of the lead, until early September, when a six-game losing streak killed any hopes of a division title. The Cubs still had a shot at matching their .500 season from two years earlier until the season's final day, when they lost to the Pirates to finish at 80-82.

Here's the full 1979 scorecard image. Click on it to open a larger version in a new browser window or tab. 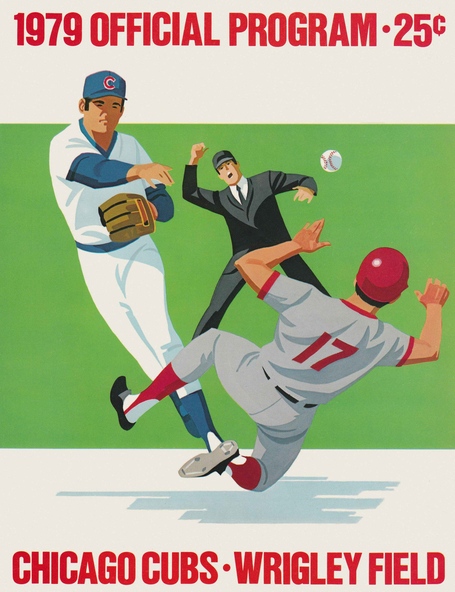