The 1981 Cubs were lucky there was a player strike. If not for that, they likely would have posted the worst record in franchise history -- even though they were sort of in a pennant race at season's end. How? Read on.

Share All sharing options for: A Game From Cubs History: September 24, 1981

The Cubs hit rock bottom in 1981, the last year of the Wrigley ownership. They split their first two games and then lost 12 in a row. Over the course of the season's first two months, they had the following records: 1-13, 3-17, 5-27, 9-32 and 10-36, then won five of their last six before the strike. They stood at 15-37 while the owners and players dithered for two months before settling their dispute and resuming the season. Had they continued to play at that percentage, they'd have won 47 games. Even with slightly better play in the "second half", their eventual overall percentage was equivalent to 102 defeats in a 162-game season; it's almost certain that had there not been a strike, the 1981 Cubs would have had the worst year in franchise history.

The1981 Cub season featured all kinds of weird and wild games. A prime example: the second game of a doubleheader against the Cardinals April 29, suspended for darkness after 11 innings on a very cold, drizzly day. It was supposed to be resumed July 3, the next time the Cardinals were scheduled to come to town. That game was cancelled due to the strike, so the resumption was then rescheduled again for September 21. It was finally cancelled September 8 due to disagreements about which half of the split season the result should count in and declared a tie game.

A 16-3 loss to the Pirates in Pittsburgh June 2 dropped the Cubs' mark to 10-34. Two days later in his TV pre-game introduction to another game in Pittsburgh, Jack Brickhouse excitedly announced the Cubs' acquisition of a player he said would "help turn this thing around!" It was Bobby Bonds, many years after he was productive. Bonds started that game in right field, and fell hard onto the artificial turf at Three Rivers Stadium diving after a ball hit by Tim Foli -- the second batter in the bottom of the first inning -- that went for a triple. Bonds injured his wrist on the dive and didn't play again until after the strike. He hit .215/.323/.380 as a Cub and was done with baseball after that year.

Great stories! But here's a better one.

As you likely know, the commissioner's office had declared the division leaders at the time of the strike as "first-half champions" and said that the winners of the "second half" would meet the first-half winners in a "division series" of sorts before the league championship series. You can see the problems with this setup -- they should have had the second-half titlist meet the overall best-record holders, and if that wound up being the same team, then you substitute the first-half "champion". As a result, the teams with the best overall records in both National League divisions -- the Cardinals and Reds -- got shut out of the postseason because they didn't win either half.

Which brings me to the story of the Cubs' sloppy 10-9 win over the Mets at Wrigley Field September 24. They blew a 7-3 lead, went behind 8-7, took a 9-8 lead, let the Mets tie the game at 9 and then made a bottom-of-the-eighth home run by Bonds hold up for the win, despite four Cubs errors. It was the last of Bonds' 332 career big-league homers.

Bob Logan of the Tribune has the details of the Bonds blast:

Bonds lofted the 2-1 serve into the brisk southwest breeze and high over the left-field wall for his sixth homer. Along with a three-run shot by rookie Ty Waller and two-run clouts by Leon Durham and Jody Davis, it was enough to give the Cubs their third straight victory and renewed hope in the zany NL East race.

Wait, what? "NL East race"? For a team that bad? Yes, Bowie Kuhn's wrongheaded playoff scheme had given what was possibly the most horrific team in Cubs history a shot at the postseason, with 10 games remaining in the season. This is how the NL East stood in the "second half" after the games of September 24, 1981:

Yes, that's right. Three games behind with 10 left. Difficult, but not impossible, even though the Cubs had no games remaining against the two teams ahead of them. It would have been hilarious if it had happened -- can you imagine the consternation of baseball moguls if the Cubs, who would have had an overall record more than 20 games under .500, had made the playoffs?

Radio broadcaster Lou Boudreau, meanwhile, was ripping Cubs fans on WGN radio. I remember very well listening to the postgame show that afternoon, when Boudreau complained: "Where is everybody? There's a pennant race going on!" The attendance at that game was 2,555. He was further quoted by Bob Logan in the Tribune:

"There should be at least 10- or 15,000 people here," Boudreau said. "The fans have been crying for a championship, and the Cubs have a chance to give them one. I don't understand why the crowds have been so small this week.

"If anyone had told them the Cubs would be three games out of first place on Sept. 24, they would all be out here. Now everybody in the division is playing each other, so all the games mean something. Getting a few more people in the park for the weekend series with Philadelphia would help the Cubs play better, I'm sure."

That was, of course, laughable. The Cubs were awful, schools were back in session, the strike had turned many fans off and with no night games, attendance was usually low late in the season, particularly after so many bad Septembers. A few more people -- 18,783 -- showed up for the final home date Sunday, September 27, a doubleheader forced by a rainout the previous day. Of interest in the second game, a 14-0 blowout of the "first-half champion" Phillies, was a little flare of a single to right field by a Phillies September callup named Ryne Sandberg -- the only hit he had in a Phillies uniform.

About that "pennant race" Boudreau was talking about? Never happened. The Cubs lost seven of their last 10 games to finish well behind the "second-half champion" Expos.

Here's the 1981 scorecard image. It's the last one in the series where drawings were on the cover; in 1982, Tribune Co. changed the scorecard format to feature player photos; I'll have player photos accompanying the rest of this series. You'll note the 1981 card -- which again featured a price increase, to 30 cents -- is identical to the 1974 design, with one exception: it shows the Cub player with No. 12, instead of No. 9 (and pinstripes were added to the uniform design, the only time pinstripes were drawn on a player in this entire series). This was done as a tribute to Steve Macko, a reserve infielder who had played briefly for the Cubs in 1979 and 1980. Macko was diagnosed with testicular cancer after the 1980 season, didn't play at all in 1981, and died in November 1981, aged just 27. Macko wore No. 12. Steve's father, Joe Macko, was a Cubs coach in 1964 and then served as a clubhouse manager for the Texas Rangers from 1973 through 2001 (he still works as a goodwill ambassador for the Rangers). It was a nice gesture by the outgoing Wrigley regime.

Click on the image to open a larger version in a new browser window or tab. 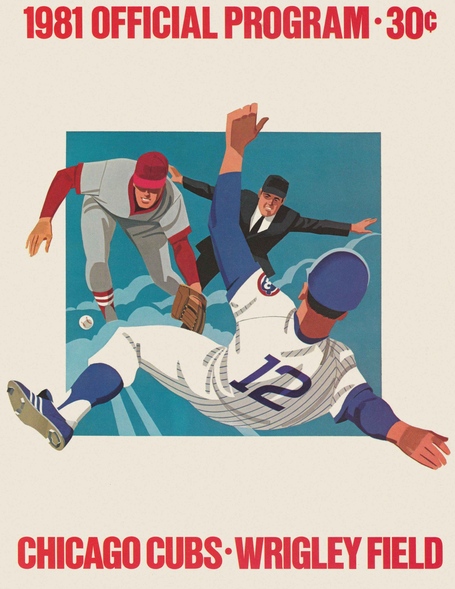