During the Wrigley ownership of the Chicago Cubs, intricate and clever artwork adorned the covers of the team's Wrigley Field scorecards. Here are images of all of them (save two), and a bit of the history behind them.

Share All sharing options for: A History Of Cubs Scorecard Artwork: 1916-1981

Offered in this gallery is a run of Cubs regular-season scorecard covers, focusing especially on the pictorial style during the Wrigley Field years that began in 1916, and continued through the end of the Wrigley family ownership in 1981. These are from my personal collection, and represent over thirty years of search. Following is a collector’s capsule perspective on their form and history.

The Cubs have produced an annual scorecard/program from the beginning of the franchise. To my knowledge, a complete set from 1876 is not held either privately or institutionally; although several years ago a dealer informed me that a local collector was within a single year (1904) of totality.

From the late 1890s a cover portrait of the owner or manager had become standard; the earliest card (1912) in my collection portrays Frank Chance (who also appeared in 1911). The earliest Cubs program from what is now Wrigley Field (1916) bears manager Joe Tinker’s image; it's the first image in the gallery above.

The 1916 change in ownership involved some economizing, so the scorecards from 1916-26 are of noticeably lesser quality than their West Side Grounds predecessors. That run was produced on newsprint, with noticeably inferior design and printing. This may in part explain their present scarcity, although some of this may also be due to the wartime paper drives in succeeding years. The cards from 1916-22 are decidedly scarcer than those later. The trio 1918-20 are the scarcest of all. World War I and the postwar economic depression likely account for low production and sales, and thus low survival.

A bit of confession, good for the soul: The older cards were subjected to quite a bit of retouching to produce these sparkling images, following is an unretouched scan of the 1919 card, a rare and difficult year to find. 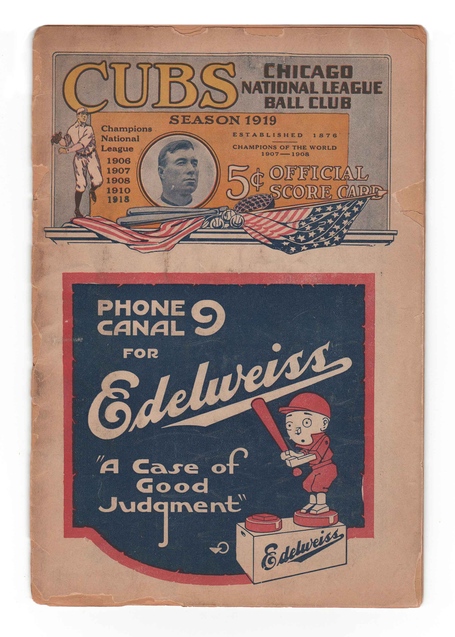 When hunting in that time span, you can’t be too fussy about condition. The portrait from 1917-19 is of manager Fred Mitchell. The 1918 card, missing from my set, is identical to 1919 except the date and cover ad. Notice that the second "9" in the date does not match the font of the rest, an error indicative of cheap and careless production values.

The cover portraits from 1920-26 are of William Veeck (senior), then team president. In 1920 the price of the program increased to ten cents, and it stayed there for the next forty-four years. The booklets, which comprised up to 24 pages in some years, contain a wealth of advertisements well worth anyone's attention as an example of the zeitgeist, both athletic and commercial. From 1927-39 the booklet format was replaced by a once-folded, single sheet card stock. The covers are undated from 1928-31, but no cover designs were used for more than one season. From 1927 specimens are much more available; there are no rarities after ‘26. One odd exception, the one-day card sold August 22, 1936, celebrated the 60th anniversary of the National League.

The booklet returns in 1940, a curious year in which multiple player portraits appear on the covers (the Cubs also did this in 1949). I can confirm at least 18 different players for 1940; it would be fun to know how availablity was handled. Five of the 1940 cards and two from 1949 are pictured in the gallery.

1943 seems to be the first cover that can be definitively credited to Otis Shepard, though he doesn’t sign a cover ("O.S.") until 1947, and only signed a few covers at all. Some of the earlier years appear to show his influence as well.

In 1948, the format that Cubs fans have known and loved for three generations was introduced, and a "classic" Shepard style lasts at least until 1962. The covers from 1956-61, 1963-68 and 1970-72 are undated, but the art is unique for each year. Preprinted lineups, an amusing bit of bygone charm, ceased after 1955. Although Shepard retired from the Wrigley Co. in 1962, my own guess is that the 1963 cover is also his; it has his look. The chronology works -- Shepard through ‘63, a reworked cover (‘59) for 1964, then an obviously new artist afterward. The covers from 1965-72 seem to be by the same hand, the art from 1973-81 by another. The identities of the post-Shepard cover artists have never been publicized, to my knowledge.

Tribune Company’s purchase of the Cubs led to the "modern" photographic covers which continue to this day. The last card in this gallery, from 2002, pays tribute to Shepard’s art.

Hope you enjoyed this brief history of the Cubs' scorecard artwork. If you'd like a high-res version of any of these, or if you have, and are willing to part with, an intact program from 1918, 1920, or from 1940 or 1949 portraying a player not pictured here, please email Al.