The 1960 Cubs were awful. But in midseason, a future star played in his first big-league game.

Share All sharing options for: A Game From Cubs History: June 26, 1960

After the promise of 1959 -- a season not too far under .500, and contention into July -- Cubs fans might have been excused if they had hope for 1960, with Ernie Banks coming off consecutive MVP seasons.

The 1960 Cubs didn't waste too much time quashing that hope. They won two of their first three, then lost nine of their next 10. They muddled through the next couple of months, and sneaked back to within five games of .500 on June 17 at 23-28... upon which they proceeded to lose nine straight, all on the road.

Something needed to be done, and it was, just after that ninth straight defeat. Summoned from Triple-A Houston -- where he was hitting .268/.348/.412 with seven home runs in 71 games -- was a skinny 20-year-old third baseman.

Yes, I'm talking about Ron Santo, who made his major-league debut in Pittsburgh, in a doubleheader on June 26. It wasn't all Santo -- he had quite a bit of hitting help from his teammates -- but the Cubs swept the doubleheader, 7-6 in the first game and 7-5 in the second over the pennant-bound Pirates. Santo went 3-for-7 with a double and five RBI and mightily impressed the Tribune's Richard Dozer:

Note in that quote that even as late as 1960, the Tribune was still spelling "doubleheader" as two words. The man referenced in the quote was Estes Kefauver, a U.S. senator who had been the Democrats' vice-presidential nominee in 1956. What the specific reference, "Honest, Mr. Kefauver", means, I have no idea.

Santo wound up hitting .251/.311/.409 with nine home runs in 95 games for the 1960 Cubs and finished fourth in Rookie of the Year voting for a team that tied the 1956 franchise record, 94 losses, and after 17 games, had swapped out manager Charlie Grimm for radio broadcaster Lou Boudreau. Boudreau, who had earlier managed the Indians to a pennant, wasn't any good in his return to the dugout and Grimm was awful in the booth. Boudreau returned to radio in 1961 and remained there for 25 more years.

Here's the full 1960 scorecard image; click on it to open a larger version in a new browser window or tab. 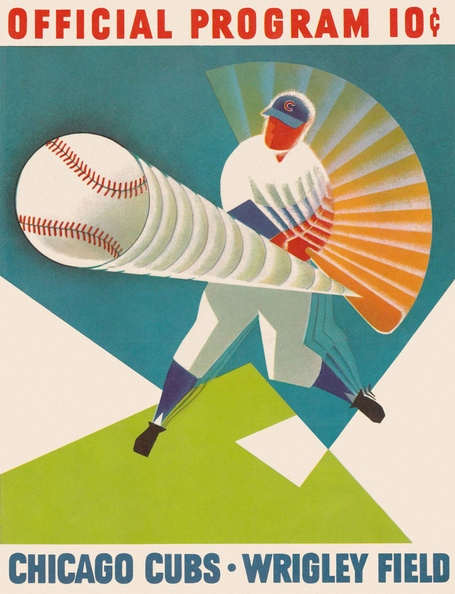