The Cubs had the worst year in franchise history in 1962, but ended the season on a high note.

Share All sharing options for: A Game From Cubs History: September 30, 1962

1962! Expansion! Two new teams in the National League, meaning the Cubs wouldn't be the worst! What could go wrong?

Plenty, as it turned out. The Cubs started the year with a seven-game losing streak that included getting swept by the expansion Houston Colt .45s to start the season. They went 4-3, then lost seven more in a row, which meant the first "head coach" of the year was replaced, but... it didn't matter.

The team was 4-17 and in 10th place -- yes, behind even the expansion Mets. They stayed there for almost a month, and after a loss to the Reds at Wrigley June 2, were 15-34. Another seven-game losing streak -- if you're counting, this is the third one of the year -- in July dropped the Cubs to 30 games under .500, 35-65. Finally, during a 10-game skid in September, the Cubs broke the franchise record for losses with their 95th defeat of the season, a 13-7 loss to the Dodgers on September 14.

And you think things are bad now. Attendance bottomed out; the 609,802 who paid their way into Wrigley in 1962 is the smallest season attendance since 1943 (except for the 1981 strike season). Three games at the tail end of the season at Wrigley, two against the Phillies and one against the Mets, drew fewer than 1,000 paid -- 930 on September 26, 617 on September 27 and 595 on September 28. The total of 2,196 for those three dates could fit comfortably in about three sections of the left-field bleachers today. When the Cubs lost to the Phillies 7-0 September 27, they dropped to 45 games under .500, the low-water mark in franchise history.

The Cubs were saved from last place only by those horrific Mets, who went 40-120, finishing 18 games behind the 59-103 Cubs. Those two teams met to end the season at Wrigley; before last October's Cubs/Astros series, it was the last time any two 100-loss teams played each other after they had both already lost their 100th game.

The season's final game, a nondescript 5-1 win over the Mets, featured one unusual play, described by Edward Prell in the Tribune:

It was the first triple play turned by the Cubs at Wrigley since 1947, although they had a couple on the road in the 1950s.

Hubbs' consecutive-game errorless streak was long-ago broken, and of course that record was taken this past year by Darwin Barney. It is one of the great tragedies of Cubs history that Hubbs, who had a fear of flying, tried to get over it by taking flying lessons. He was killed in the crash of his private plane in February 1964, after being named Nationel League Rookie of the Year in 1962. He had regressed a bit offensively in 1963, but was only 21 years old that year. His offensive numbers don't look that great today, but in those days, middle infield was considered a defensive position, and Hubbs, who was 6-2, might have become a Ryne Sandberg-type hitter.

A couple of other odd notes on that final 1962 game; for Joe Pignatano, who became a longtime big-league coach, mostly with the Mets, that was the last at-bat of his major-league career. And Bob Buhl, who started that game for the Cubs, went 0-for-4, striking out three times. In doing so, he completed a season in which he went 0-for-70 -- the most at-bats by anyone in a single season without a hit. (The record for position players was set by Eugenio Velez of the Dodgers in 2011, 0-for-37.)

Here's the full 1962 scorecard image; you might recognize the stylized face images as the ones the Cubs used on their LED board in right field for the starting pitchers of the day before the game. Click on the image to open a larger version in a new browser window or tab. 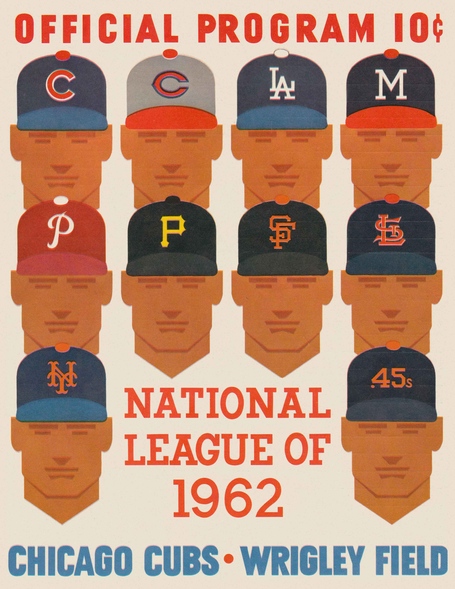