The Cubs completely turned around their disastrous 1962 season to have a winning year in 1963, and one early-June game was particularly memorable.

Share All sharing options for: A Game From Cubs History: June 6, 1963

1963 was a watershed year for the Chicago Cubs. The College of Coaches was ditched -- Bob Kennedy led the team for the entire year, though his title was still given as "head coach". And, the team got off to a surprisingly good start; a good 16-12 May had them in contention, led by two fine young hitters -- Billy Williams and Ron Santo, both having their first big years -- and the outstanding pitching of Dick Ellsworth, who had gone 9-20 with a 5.09 ERA in 1962. Entering June 1963, Ellsworth was 6-3 with a 1.28 ERA.

The Cubs went 5-1 to begin June, and swept a doubleheader from the Giants at Wrigley Field June 5, putting them just a game behind first-place San Francisco going into the action June 6.

The game went into extra innings tied 2-2 after Williams hit a two-run homer off Juan Marichal to tie the game with two out in the eighth. The Giants began the top of the 10th with two singles and a sacrifice bunt, putting runners on second and third; Willie Mays was the runner on second. An intentional walk was issued to load the bases, and then Kennedy called on Lindy McDaniel, who had been acquired in one of John Holland's better deals the previous offseason (the Cubs got McDaniel, Larry Jackson and Jimmie Schaffer from the Cardinals for George Altman, Don Cardwell and Moe Thacker).

Edward Prell of the Tribune picks up the story:

Now, considering that it was 1963 -- nearly 50 years ago -- that last sentence was pretty scandalous for a major newspaper, even though no profanity was actually published. Also note, in that quote, the Americanization of Andre Rodgers' name, something fairly common in those days for names considered "foreign" (Roberto Clemente was often referred to, even by his own team's broadcasters, as "Bob", a name he hated).

McDaniel was the first scheduled hitter in the bottom of the 10th. He had thrown just four pitches, so Kennedy decided to leave him in to bat for himself. This was fairly common in that era; McDaniel, entering 1963, was a .179 career hitter with one home run in 234 career at-bats (he'd been a starter in his early years, but batted frequently even after shifted to relief).

The Giants' Billy Pierce had taken over from Marichal to begin the 10th. He ran the count to 2-2 on McDaniel. The relief pitcher swung at Pierce's fifth pitch and sent it into the bleachers in left-center for a walkoff home run and a 3-2 victory, putting the Cubs in a first-place tie with the Giants. It was the first time they'd been in first place that late in a season since 1945.

As you can imagine, a walkoff home run by a relief pitcher is a rare thing. It hasn't happened since 1986, when ex-Cub Craig Lefferts did it for the Giants against the Padres. That article says just 32 pitchers have ever hit walkoff home runs; I found just 15 games where it had been done by a relief pitcher in baseball-reference's database since 1916, and that feat's been done just twice since McDaniel -- the Lefferts blast, and by Jim Hardin of the Orioles on May 10, 1969.

The Cubs' stay in first place was brief -- just two days -- but they stayed in modest contention until early August, hanging within five or six games before fading and finishing seventh, but with a winning record of 82-80, their first over-.500 season in 17 years.

Here's the full 1963 scorecard image; click on it to open a larger version in a new browser window or tab. After 1962, when longtime Wrigley art director Otis Shepard retired, the designs were done in Shepard's style, but by another artist, until 1981, when the team was sold. Many of the designs were quite nice, but they weren't quite Otis Shepard. 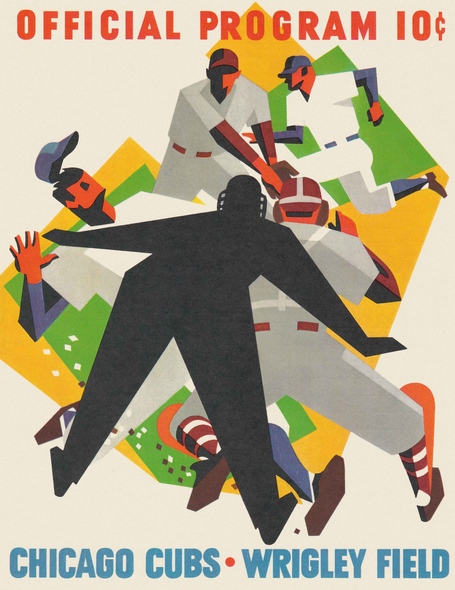