Share All sharing options for: A Game From Cubs History: September 16, 1965

What could go wrong with offense like that? Plenty, as it turned out. The rest of the team was awful offensively -- no one else had more than 34 RBI (Don Landrum), and in the first year of the long-running double-play combination of Glenn Beckert and Don Kessinger, the two played good defense but didn't hit at all. Beckert hit .239/.275/.298 and Kessinger .201/.252/.233 and even in that lower-offense era, those were awful numbers.

The pitching staff wasn't any help either -- they allowed 723 runs, second-most in the league, and the Cubs swiftly dropped to eighth place; "head coach" Bob Kennedy was dismissed after 56 games, but replacement Lou Klein couldn't do much better, and the Cubs lost 90 games for the second time in the expansion era.

I chose the September 16 game, a 2-0 loss to the Dodgers, for two reasons, both of which have to do with things surrounding baseball that would never, ever happen today.

First, the paid attendance for that game was just 550. Yes, that's five hundred and fifty, in an era when only the turnstile count was announced. It wouldn't even have included season tickets, and I doubt the Cubs had more than a few hundred of those, anyway. It was the smallest crowd at Wrigley since at least the 1940s (there would be one more like this to come, slightly smaller, the following year). Here's the primary reason for that attendance count, in addition to the bad team, from Edward Prell's Tribune recap:

According to the Tribune's weather article that day, the temperature during the game was 55 degrees and it did rain either during or after the game, or both.

The other unusual feature of that game was the entrance of Sandy Koufax, the Dodgers' best starter, in the ninth inning to save the game. The save had been invented just five years earlier and was not yet an official statistic (that didn't happen until 1969), and managers would often use pitchers in that way to shut down games they really needed to win. The Dodgers were in third place, 4½ games behind the first-place Giants, and the September 16 win over the Cubs on that gloomy afternoon was the first of a 13-game winning streak and a 15-1 season-ending run (very similar to a run many years later by the 2007 Rockies) that gave the Dodgers the pennant. The Dodgers' pitching in those years was what helped them win; in the 2-0 win against the Cubs, starter Claude Osteen and Koufax gave the Cubs just five hits and three walks, and only one runner -- Kessinger, who doubled leading off the third inning -- made it as far as second base.

Here's the full 1965 scorecard image; click on it to open a larger version in a new browser window or tab. You'll notice one significant change; after decades of pricing the card at 10 cents, the '65 card featured a price increase of a nickel. 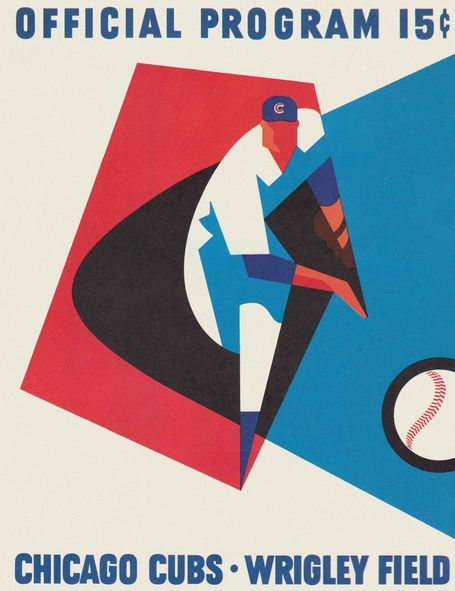