Leo Durocher took over the Cubs in 1966 and declared, "This isn't an eighth-place team." He was right. They finished 10th.

1966 was supposed to be a transformational year in Cubs history. P.K. Wrigley, at last seemingly upset at all the losing, hired Leo Durocher to take over the club. At his introductory press conference, he buried the College of Coaches forever, saying, "I'm not a 'head coach', I'm the manager," and then declaring, "This isn't an eighth-place team."

Well. The Cubs set about proving Durocher right by getting off to an awful start and dropping into 10th place before the end of April. Losing streaks intermittently interrupted by one or two wins at a time made the club record 1-8, 3-12, 4-16 and 6-20 as they welcomed the Houston Astros to Wrigley Field in mid-May. A rainout forced a doubleheader May 18, so this post is once again about two games.

The Cubs lost them both, 5-1 and 4-2, putting them 14½ games out of first place with just 28 games of the season played -- that's almost impossible to do (they were 5½ games behind the ninth-place Cardinals). Richard Dozer's Tribune recap called the team "indescribably bad" and:

In both cases, errors were the curse of the Cubs' futile efforts to break free of a losing streak that now has them almost out of sight in the National league dungeon. They committed four errors, and three set Houston's scoring machinery into motion as the Cubs stumbled blindly to their fifth and sixth consecutive defeats.

The primary reason I chose these games, beyond the fact that this was just about the worst the Cubs had been in their history, is that the Tribune had chosen this date to send Ridgely Hunt, a writer who specialized in writing war stories -- he wasn't a sports fan or sportswriter of any kind -- to do a feature for the Sunday Tribune Magazine about the Cubs and how far they'd fallen. The piece, which ran almost two months later (July 10), was titled "How To Go, Ernie Baby!" -- apparently after a yell that several fans made in the general direction of Ernie Banks, even when he wasn't doing anything -- and it was an indictment of almost everything that had to do with the team and the Wrigley regime:

Only 3,813 fans -- about one-tenth of a capacity crowd -- had turned out for the afternoon's spectacle. Of these a few were children in organized herds, a few were service men in uniform, and a few more were housewives. About half a dozen executives had brought along their briefcases and their out-of-town customers. The rest were superannuated men, crumbling and suffering through the agonizing decline known as the golden years. They sat there, blinking in the sun, clutching their 15-cent programs, and waiting for something to happen.

Very little, in fact, was to happen that afternoon.

Baseball, even when played by professionals, moves at a stately pace with long pauses while the pitcher scuffs the mound and hangs his head dolefully. The Cubs' pitcher had plenty to be doleful about.

Houston was winning its 19th and 20th games of the season, and the Cubs, thanks largely to their own errors, were sinking to their fifth and sixth consecutive defeats. Even their most ardent proponents could not bear to watch the slaughter, and slowly, as the sun yellowed and fled toward the west, the little flock of spectators dwindled. Attendance varies directly with the success of the team: the Cubs attract only a little band of the faithful. Beautiful Wrigley field has thousands and thousands of seats, rising tier upon tier toward the sky, but vast sections of the stands lay closed and empty. "If it were conceivable," said the man next to me, "that the Cubs could lose any more games than they already do, they would draw even smaller crowds -- if that were conceivable."

There would be better times to come in the next several years.

Here's the full 1966 scorecard image. It might have been a nod to Durocher's hiring and his reputation with umpires. Click on it to open a larger version in a new browser window or tab. 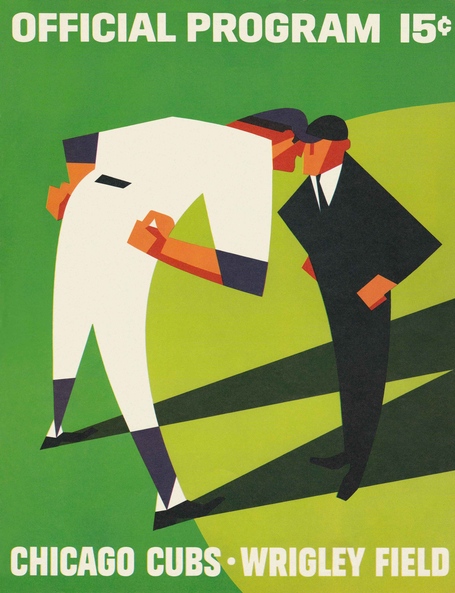