There's something... different about the Wrigley Field foul poles. Can you tell what it is?

Share All sharing options for: The Wrigley Field Foul-Pole Anomaly

Major-league stadiums added foul poles decades ago to help umpires judge whether balls that left the ballparks were fair (and thus home runs) or foul.

The "foul pole" is a misnomer; the pole is completely in fair territory, so that any ball that hits it is ruled a home run.

That's the case in every major-league stadium... except Wrigley Field. Look at the photo at the top of this post of the left-field foul pole, and this one, of right field: 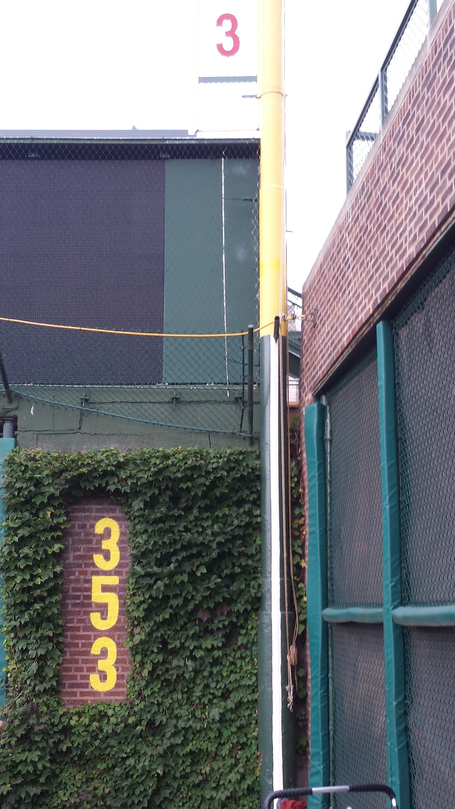 As you can see, the foul line on the wall -- which is a direct extension of the line on the field -- is exactly in the middle of where the pole extends. Thus, there could theoretically be a baseball that hits the right side of the right-field pole (or the left side of the left-field pole), a ball technically in foul territory -- that would have to be ruled a home run, because it hit the pole.

Now, with the current review system it's possible that umpires might look at a replay of such a ball and call it foul. Retrosheet has a complete list of all reviews since the system was implemented in 2008; there have been just five reviews at Wrigley Field. Just one involved a ball hitting the pole, on August 28, 2009:

In the bottom of the sixth, Aramis Ramirez hit a fly ball to left that hit the top of the wall in foul territory and then bounced off the pole. It was called foul but Cubs manager Lou Piniella asked about the call. After the umpires huddled, Bill Welke, Mark Carlson and James Hoye watched the replay and upheld the call. Jim Reynolds was the acting crew chief but did not watch the replay.

That one, as you can see, didn't involve the scenario I'm noting in this article; such an occurrence would be extremely rare. It might be too difficult in looking at a replay to determine exactly where a baseball hit the pole, and if the lower half of the foul line isn't in the video, impossible to call it anything other than a fair ball.

Here's a full view of the left-field foul pole photo at the top of this post; you can see that the white line painted on the pole is completely in fair territory, but the entire pole is not: 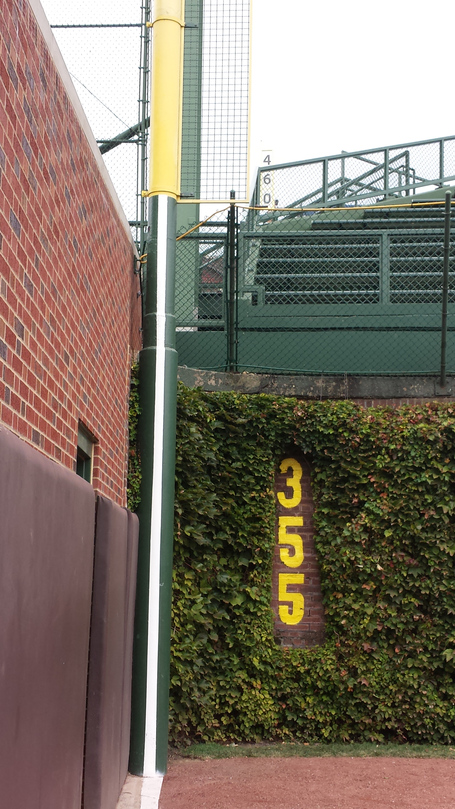 This is just a curiosity that's likely never going to come into play. I was at the Wrigleyville Neighbors day at Wrigley Field Saturday and, while on the field, thought I'd take these photos so you could see the anomaly for yourself.