The Cubs have lowered season-ticket prices for 2014. A little. A VERY little.

Prices are down... a little.

For the bleacher season-ticket holder, the price for a full-season ticket went down... by $7. The biggest decrease I could find was $38, for the full-season price of a season ticket in Field Box infield. The Cubs moved quite a number of games out of the least expensive category (Bronze) among bleacher dates into the second-lowest tier (Silver), although they also moved some games down into Silver from the category just above it (Gold). In this way they have made... virtually no difference at all. (Insert "rearranging the deck chairs on the Titanic" joke here.)

So that you can make your own comparisons, here are pricing charts from last year and this year. (Click on images to embiggen.) 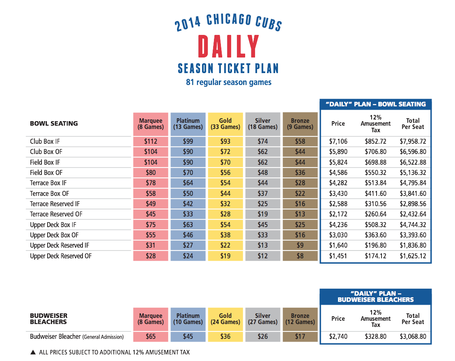 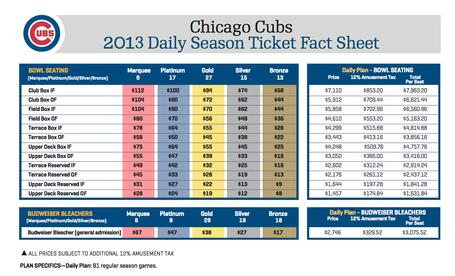 Now, about this pricing structure: first, the Cubs have not yet announced single-game prices. I suspect they will be somewhat higher than this, in order for them to have the dynamic pricing system they claim to want to do. If they aren't, then they will be undercutting season-ticket prices... which would be an incentive for people not to buy or renew.

My feeling is that at these prices, the Cubs will have many cancellations and not many new buyers of season tickets -- unless they make moves this offseason to indicate they are putting a better product on the major-league field. I have repeatedly said -- and do not ever tell me I believe otherwise -- that building a strong organization from the ground up is a good thing. But for the last two years, the Cubs have been putting an expansion-level team on the major-league field, especially in the last two months of each season. It is too much to ask of the season-ticket buyer to continue to pay premium prices to watch an inferior product.

As I have said before, and explained on this site again last month, I will be renewing. I know many, many people who won't be at these prices, and again, unless the Cubs show specific signs of wanting to put a better team on the big-league field in 2014, I don't see many new season-ticket buyers at these prices.

There's one last thing I want to say about all of this, and I'd like you all to pay careful attention to what I'm saying here and how I'm saying it.

Remember when Tom Ricketts reportedly told his family, when they were considering buying the Cubs, "Look, they sell out every day, win or lose!"

From about 1998 -- when Sammy Sosa and a wild-card playoff race brought full houses to Wrigley beginning about mid-June -- through at least the first part of the bad 2011 season, that was absolutely true. The Cubs sold at least three million tickets every year from 2004 through 2011 (and they would have reached that number in 2003, too, if the final Friday of the season hadn't been rained out and made up as a single-admission doubleheader the next day). That 14-year span included four playoff seasons, but also five 90-plus loss years.

Now, attendance has declined by 10 percent each of the last two years; 2013's attendance was the lowest since 1998, and, as I've written before, there were certainly more butts in the seats in 1998 than there were in 2013.

Will contention bring people back? Of course it will. Will a playoff team or multiple playoff teams fill the ballpark and sell out playoff games? Absolutely.

But the Cubs had something special, for lack of a better term, an "aura" of sorts around Wrigley Field. It was the place people had to be, regardless of price, even when the team was going bad. The Cubs sold three million tickets twice for 90-plus loss teams (2006 and 2011).

That's what I believe is gone forever, through a combination of high pricing and an attitude toward fans that appears to me to be summed up by, "We can just throw the doors open and the 'Wrigley Experience' will bring people streaming in, so we don't have to be nice to anyone!"

Yes, yes, you do. To Cubs management: you had something special that could have lasted forever, and you killed it. When the Cubs return to contention, they'll draw. If they continue to win, they'll draw. But if they don't, if and when they then go back to 90-loss seasons, Wrigley Field will look like Cleveland, instead of the "sell out, win or lose" the team had even during losing years through about 2011.