NOTE FROM AL: You've read and enjoyed the fanposts from "Son Ranto" over this past year. I've invited him to make front-page posts, under his real name, Danny Rockett. You might have heard this week about a blog war happening about the Cardinals and their fans. Danny jumps into the fray with his first front-page article.

Share All sharing options for: I'm Trying To Make Cardinals Hatred Happen. It's Going To Happen.

You might have read the recent article by Cardinals fan Mollie Hemingway entitled "Stop Trying to Make Cardinals Hatred Happen. It's Not Going to Happen". Which, besides being the worst title in the history of titles (I would have called the article "Whining While Winning"), is dead wrong in the assertion that anybody is trying to make Cardinal hatred happen. It's happening. It's real. And with good reason.

First of all, they're winning. As I write this, the Cards are only one win away from the World Series. Again. Of course, Cubs fans are seething with envy about it, along with fans of the Nationals, Reds, Pirates, and soon, likely, the Dodgers. The last thing any Cubs' fan wants to see is another Cardinals championship. It's terrible! It is a dagger in your heart to watch your rivals win in October, providing bragging rights to the self described "Best Fans in Baseball" -- a moniker I take issue with.

There are good and bad fans of every team. But Cardinals fans can be particularly loathsome to a Cubs fan. Not only because of their arrogant boasting about their "well-run" organization and winning ways, but because they wear their hatred of Chicago on their sleeves, or their shirts anyway. The gentlemen pictured below, who I dubbed the "The St. Louis Party Boys" in a Fan Post this past summer, were roundly booed when they walked into Hammerstone's bar, a local St. Louis pre-game spot, which provides a shuttle to Busch Stadium. 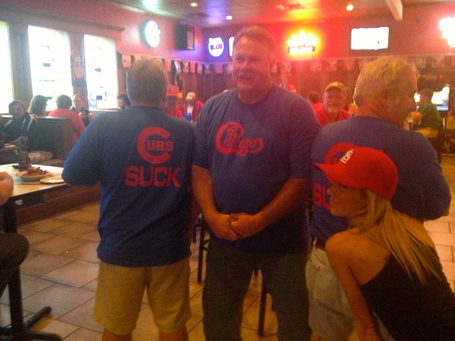 The patrons at Hammerstone's saw the Cubbie blue, and the unauthorized "Chicago" logo, and jeered "The St. Louis Party Boys" immediately, at which point, they turned around in unison revealing the true nature of their fandom. 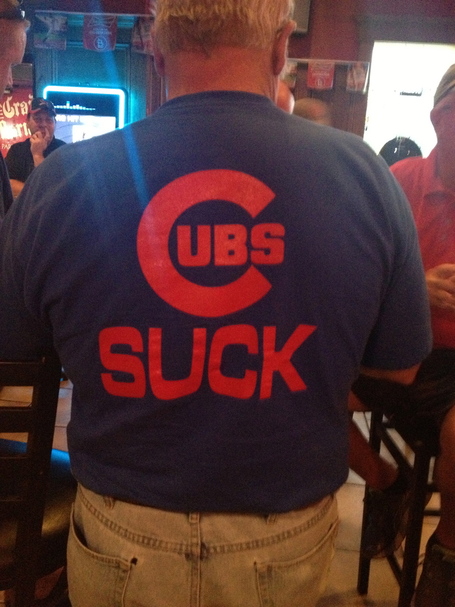 "The St. Louis Party Boys" are also known for their chanting abilities. Listen to their chart topping single from their new album called "Cubs Suck."

Hilariously, when I linked up with "The St. Louis Party Boys" later at the game, they had been forced to turn their shirts inside out, which they did, then disobeyed, and one of them was asleep (shirt inside out). Apparently, the Cardinals brass didn't get the memo that "Suck" is not a dirty word. It is also an accurate way to describe the Cubs 2013 season. 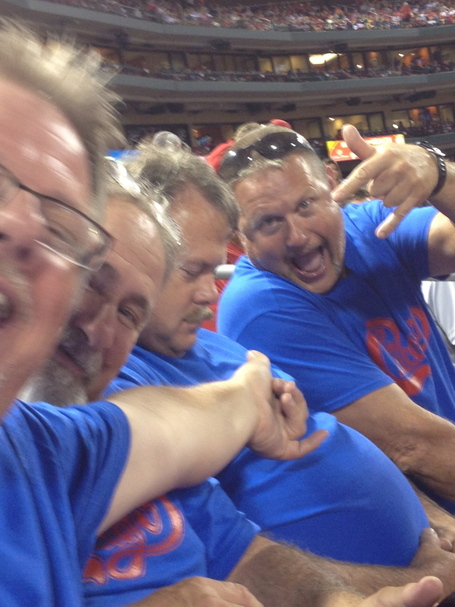 One of "The St. Louis Party Boys" intimated to me that they had made these shirts for Opening Day a year or so ago. Apparently, they decided that insulting their rival Cubs would be a better way to show their team allegiance than wearing a Cardinals shirt. They were asked to leave the stadium shortly after this photo was taken for not obeying the ushers demands that they keep their shirts inside out. I was also asked to leave for arguing with the usher about banning words like "suck", sitting in the wrong seat on the wrong level, and being obviously drunk.

But Cub hatred wasn't only limited to the "St. Louis Party Boys". This photo was taken outside of Hammerstone's bar. 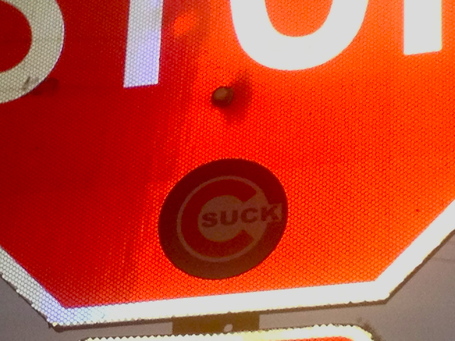 And while walking down Cherokee St. in St. Louis, I happened to notice Cubs embroidered toilet paper for sale in a storefront window -- the perfect gift for the diarrheal Cardinals fan. 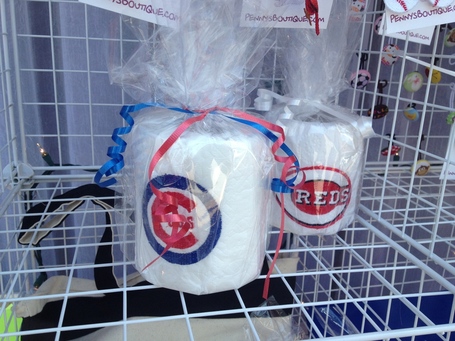 This all seems like a ton of negative effort in order to show your Cardinal pride. I'm certain that Cubs fans wear "Cardinals Suck" shirts at Wrigley as well, but they are not common. In fact, a quick search on Cafe Press's website shows triple the "Cubs Suck" shirts in production compared to "Cardinals Suck" shirts. These so-called "Best Fans in Baseball" in St. Louis are likely the biggest purchasers of these shirts, as it seems to be the style down there.

Another anecdotal example concerning "Cardinal Nation" happened to me on a Cubs road trip to Colorado this past summer. While hiking up a sand dune, I spied a family of four clad in Cardinals shirts climbing up behind me. 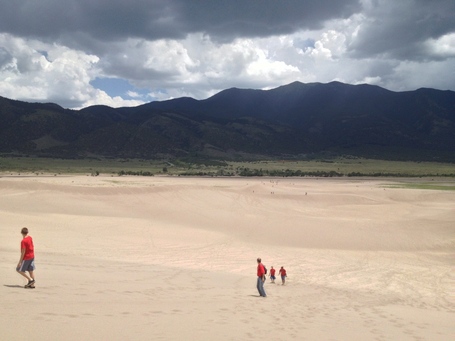 I was wearing a Cubs hat, and the patriarch of the family and I struck up a conversation about the baseball season. The guy had the nerve to bring up Steve Bartman and made some paraphrased joke about how the Cubs will win next millennium. Ha, freakin', ha! Here we are, standing halfway up America's largest sand dune, surrounded by beautiful mountains, and this guy is naysaying the Cubs, who don't even pose a threat to the Cardinals this year!

Listen to a bit of our conversation: "Cardinals Fans on Sand Dune."

I got the last laugh though, because they asked me to take their picture, and I made them say "Go Cubbies" instead of "Cheese."

There is so much wrong with this encounter, I don't even know where to start. First of all, I find this family to be unbelievably dorky to all be wearing the same shirt -- let alone Cardinals shirts. They look like they belong to a cult. I live in Chicago, and I never see entire families wearing Cubs shirts unless they are at the ballgame. Can you picture the scene in the hotel room when they are all getting ready to go to the sand dunes and decide to wear the same shirts? Corny! I imagine them having a whole suitcase of matching T-shirts from various church trips and family reunions. Lame. If this is what it means to be part of the greatest baseball fan base, I want no part of it.

Besides, how easy is it to be a fan of a team that wins all the time? I caught half of the Cubs games this season live and in person, and I don't need to tell you all how many times I sang "Go Cubs Go" -- not very many. So, who's the greater fan? A die-hard Cubs' fan who has stuck with the team, despite having losing records for 12 of the last 20 years, or a Cardinals fan who has suffered through only five losing campaigns and celebrated two World Series titles, three pennants, and nine first-place finishes in the Central division in the past two decades. Yes, the Cardinals are worth hating simply for their accomplishments.

I'm personally not a big fan of the "Cardinal Way" either. Sure, it's successful, but did you see the Cardinal pitchers stretching in unison the other night? Creepy. The Cardinals develop their own talent through their minor league system, a practice the Cubs are currently trying to emulate, but it's all done in this culty manner that makes you feel as if you are going to be asked to join their church, or be sold on some pyramid scheme. The Cards are certainly a clean cut bunch too. No big bushy beards or long hair like the Red Sox. When the Cubs finally win the World Series, I want it to be with a cast of characters, ragtag lovable veterans, and hotshot rookies, not with a squad that looks like a J.C. Penney catalog.

All this blogging about Cardinal hatred started because of a Drew Magary Deadspin article called "Why Your Cardinals Suck", where the Cardinals are described this way:

I'd like to know how one goes about reconsidering hatred.

To me, hating the Cardinals and the fans that cheer for them is just a natural state of being for me. I'm a Cubs fan, it's in our DNA. And it most certainly doesn't help their case to not hate them that they are a game away from another pennant, and I have to hear about Steve Bartman on a sand dune in the middle of Colorado, and listen to Cubs Suck chants. But it's not worth hating Cardinals fans because they're corny and bland or that they live in a mediocre city with a population one-tenth the size of Chicago. Hate them because the Cardinals win so damn much, and they brag about it in a whiny, "woe is me" fashion, wrapped into a loaf of white bread. It's annoying as hell, but I dream of the day I get to brag about the Cubs, and people can hate me. 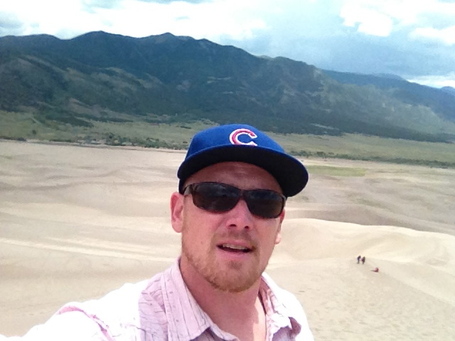