It's been 68 years since the Cubs last played in a World Series. There's still one man alive who was a part of that National League championship team.

And then, there was just one.

Former Cub Andy Pafko passed away earlier this month at age 92. That leaves Lennie Merullo as the only living human being who has played in a World Series game for the Chicago Cubs. In fact, he's the oldest living player to play in any World Series. The Red Sox' Bobby Doerr is the only other man currently age 95 or older who has World Series experience; he's about a year younger than Merullo.

You'll be pleased to learn, as I was, that Lennie Merullo is not only still living, but in good health and enjoying life in his home outside Boston, the city where he was was born and raised. And he's not just the oldest living former Cubs player; he's the eighth-oldest living former major-league player and will turn 97 next May.

Even at his advanced age, Merullo is enthusiastic about baseball and loves to talk about the game and is keeping a close eye on this year's postseason. He told me in two recent phone conversations that he's a Cub, through and through, follows the team and baseball very closely, and thinks the most of Theo Epstein and what he's trying to do with the Cubs. He called Theo "a smart guy, savvy"; he's met Theo before and said the Red Sox have always been cordial with him. Even though he grew up in and has returned to the Boston area, he says, "The Cubs are still my baseball family." 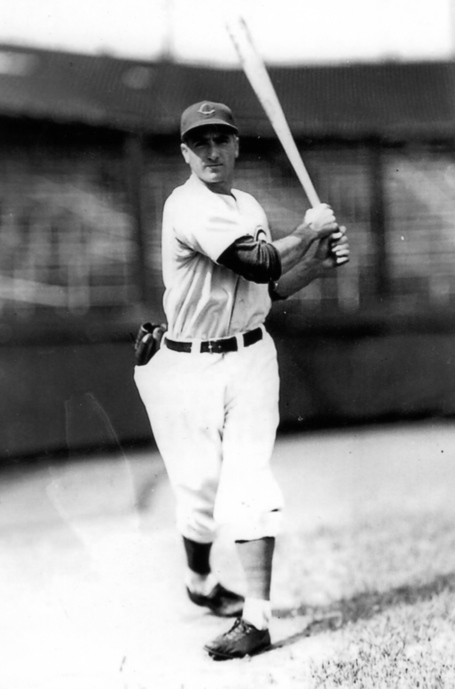 About the 1945 Cubs, Merullo has nothing but fond memories. He said it was a "sad day" when his teammate and friend Pafko died, and called that club "a group of exceptional guys who got along famously, good, bad or indifferent." He told me that when the players' wives and girlfriends arrived in Chicago for the World Series, they had dressed in their finest clothes, hoping to stay in a top hotel on Michigan Avenue. That wasn't what the Cubs had ordered up, though; ownership rented a boat so the players and their wives could stay away from distractions. When the players and wives hinted this wasn't quite what they had hoped for, they got moved to a better hotel.

Merullo was the Cubs' regular shortstop from 1942 through 1945 and also 1947, and known more for his glove than his bat; his overall batting line of .240/.291/.301 was pretty modest even by the lower-offense standards of the World War II era. But he was considered to have the gift of fine hands. Even though his error totals appear high by modern standards, you must take into consideration the fields and gloves of that era when evaluating that fielding performance. This 2010 Boston Globe article talks about Merullo's worst game in the field -- a day of which he has a permanent reminder:

On Sept. 13, 1942, in the second game of a doubleheader at Braves Field, Merullo made four errors in one inning. He also committed an error in the first game, for a total of five that day. Easy to understand: His first child had been born that morning.

After traveling by train from New York, where the Cubs had played the Giants, Merullo had gotten little sleep before the birth of his son.

”I went out and had a great day,” Merullo said. “If they hit me another ball, I would have booted that one, too. Four errors in one inning.”From there on, the oldest son would forever be known as “Boots.”

The Globe article also mentioned Lennie's wife Mary Jean and that they would celebrate their 70th anniversary early in 2011. Somewhat hesitantly, I asked him if she were still living.

Enthusiastically, he replied, "I'm looking at her sitting across the table from me! I married the girl down the street."

They were wed February 9, 1941; next February they'll have been married 73 years, a remarkable love story. The son known as "Boots" had a son himself, Matt, whose name you might find familiar. Matt Merullo played six big-league seasons for the White Sox, Twins and Indians from 1989-95. Matt also played in the Cubs' system at Triple-A Iowa in 1996; I recall seeing him play a few spring-training games in Mesa that year. Still in baseball, in 2013 he managed the short-season Aberdeen Iron Birds (New York-Penn League) in the Baltimore Orioles' system. 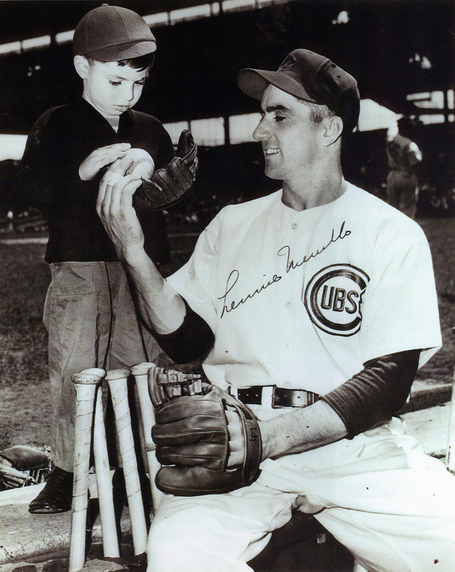 Lennie Merullo spent many years in baseball after his retirement as a player. From 1950 through 1972 he was a scout for the Cubs, and considers his proudest achievement in those pre-draft days the recruiting and bonus-baby signing of Moe Drabowsky. Drabowsky, a tall righthander, could have been a cog in the great Cubs teams of the late 1960s -- if they had kept him. Unfortunately, as with so many young players of that era, Drabowsky wasn't well-coached by the behind-the-times Cubs coaches and managers. His first couple of seasons in 1956 and 1957 were good ones, but by 1960 his performance had slipped, and on March 31, 1961 he was traded with Seth Morehead to the Milwaukee Braves for Daryl Robertson and Andre Rodgers, another nothing deal by then-GM John Holland. Drabowsky eventually became a top reliever for two Orioles World Series in 1966 and 1970.

Merullo was also involved, peripherally, in the signing of Ernie Banks; when Banks worked out for the Cubs, Merullo told me, "I couldn't help but notice his confidence," and highly recommended his signing, after being consulted about Banks because of his own experience at shortstop.

While we look toward the Cubs' future, which hopefully will be bright and include many World Series appearances, we shouldn't forget the past. Lennie Merullo is a living reminder, the living reminder of the Cubs' last World Series appearance, which is now almost seven decades gone. Roy Hughes started at shortstop in six of the seven games; Merullo started Game 5 and otherwise served as a pinch-runner and defensive replacement.

If you've read some of my previous history posts, you know I can't resist trying to track down the date of a photographed event if it's not otherwise obvious. The photo you see at the top of this post is one of those; Lennie's other son Dave graciously mailed the three photos to me so I could scan them and post them. On the back of that photo was written, in very careful, precise handwriting:

That inscription actually made this one easier than I thought it would be. Erv Dusak was an infielder/outfielder for the Cardinals (and Pirates) from 1941-52 (excepting the war years). I looked through his game logs at baseball-reference.com. Dusak grounded into exactly one double play at Wrigley Field in his career; it happened April 26, 1947, a game the Cubs won 8-4. The bright sunshine (note the shadow beneath Merullo) matches the weather conditions that day, a sunny, 70-degree afternoon at the ballyard at Clark & Addison.

10 other men still alive -- Ralph Kiner, Monte Irvin, Al Dark, Wayne Terwilliger, Turk Lown, Red Adams, Irv Noren, Harry Perkowski, Charlie Silvera and Bob Usher -- are on the Top-100 list of oldest living players and were members of the Cubs before 1960, before the expansion era, men who played baseball as it was in an age that now belongs to the distant past (and only Irvin, Dark, Lown, Terwilliger and Kiner had Cub careers of any significance; the others played only a handful of games or at most one year as Cubs).