To my disappointment, the Cubs failed in their attempt to hire a robot manager and went with a Spanish-speaking human, but they have a chance to make things right! It's time for the Cubs to lead Major League Baseball towards the future and employ the first ever Artificially Intelligent Announcer.

Share All sharing options for: The Cubs Need A Legendary Robot Announcer

The news of Keith Moreland leaving the broadcast booth neither surprised nor saddened me. I personally prefer listening to the ball game on WGN than watching it on TV, but these last few years since Ron Santo's passing have been mediocre. Not only because of the on-field play, but mostly because Moreland, who was one of my favorite players as a kid, just didn't cut it behind the mic. He was nice, folksy, but a little boring. His Texas twang didn't seem a fit for the Midwest, and I'm forever scarred by the way he pronounced the word "Peeenalize" .

Let's face it, he was never going to turn into the superfan that Santo, Harry Caray and Jack Brickhouse were. Chicago's favorite legendary Cubs broadcasters have always been always old, seemed drunk (and at times probably were), or at least have been little batty and unpredictable. Mark Grace's recent alcohol-driven antics would have fit that bill nicely, provided a four-month stint in the slammer hasn't sobered him up, but maybe its time to try something new. After all, Pat Hughes carries the broadcast by himself anyway, except for the Fifth Third Bank fifth inning, when Judd Sirott's eagerly caffeinated voice makes you hope the Cubs go 1-2-3 so we can hear Hughes again. Thankfully, Sirott doesn't seem to be in line for the color job, even though his Uncle Bob is Chicago media royalty. Sorry to be snarky. I'm just jealous of him having the job I want.

So, with the Major Leagues employing instant replay this year, and the Cubs in need of a broadcaster, it's time to relive our old baseball memories through modern technology and use a robot announcer. The "Brick-Car-To-Tron 2500", a virtual announcer coupled with the golden throat of Pat Hughes, would provide baseball entertainment and analysis for years to come. We have the technology.

A color commentator should be exactly that. Colorful. No need to bore us with every ball, strike or out. Just regale your listeners with old baseball tales and anecdotes. There are hundreds of thousands of recordings of Brickhouse, Caray, and Santo doing just that, and they could all be catalogued and spliced so that every current player name, stat, and call would be at the fingertips of the engineers in the booth. Automated editing, combined with artificial intelligence would provide Pat Hughes with a broadcast partner that would not only learn from Hughes through AI, but also be controlled by Hughes. Pat could even rest his voice by splicing together imaginary anecdotes told by Caray and Santo to play during the slower points of the game. Imagine the hilarity of Harry trying to pronounce Yoenis Cespedes? Or Ron Santo's legendary howling after a bad play, so that the listener would be left in suspense as to what happened until Pat Hughes explains it all. There's plenty of audio available for Brickhouse to call the game as well. "Strike 1." "Ball 2." "Out trying to steal." That sort of thing.

The best thing about the robot is that we never have to hear it complain about how it wants to spend more time with its family, when in fact it has a dream job that millions of people would cut off their left arm to get. Nope! Just endless stories recut and edited. Like the time Santo and Banks went fishing and Ernie fell out of the boat and couldn't swim, and then Randy Hundley jumped in and saved Banks and gave him mouth to mouth resuscitation. It didn't really happen, but with a little clever editing the "Brick-Car-To-Tron" can make it feel like you were actually there on the banks of that lake! Harry Caray can be engineered to attempt to say "Saltalamacchia" backwards, and call our catcher "Welington Castro". And Brickhouse's legendary "Hey! Hey!" can live on after a Junior Lake three-run homer. Generations of Cubs fans will be brought together, but with the modern conveniences inherent in a robot.

Need to know Nolan Ryan's strike outs to left-handed batters over six feet tall of Latin descent? Robot knows it. Want to know who won the Cy Young for two different teams in the same year? Robot knows that didn't happen. And the "Brick-Car-To-Tron" does it all with the folksy charm of a septuagenarian in a Campbell's Soup commercial who just happens to be the greatest Cubs fan in the world! A wealth of knowledge wrapped into, count them, three broadcasting icons?! Yes please!

Just as Major League baseball knocked down the walls of segregation before the rest of the country was ready, so should baseball help tear down barriers between humans and their eventual robot overlords. I believe Pat Hughes is the man to bring us all together. Or at least begin the process of accepting homo sapiens and robots working side by side until we're all cyborgs. Plus, we can keep the memories alive of some of the greatest Chicago broadcasting legends ever. It's a win, win win. As Wrigley Field enters its 100th year, it would be a truly fitting tribute to employ the voices that haunt the hallowed park, all while stepping towards a new century with a robot broadcaster. The future is here. And it's the "Brick-Car-To-Tron" 2500. 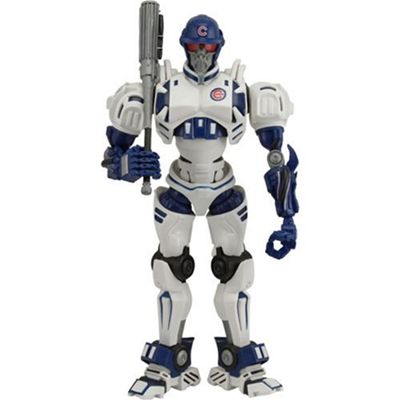 P.S. You can buy this awesome Cubs Robot on eBay …