Another Cubs Brick In The Wall

What would you do if a monument to your failed marriage lay just outside your favorite place on earth, Wrigley Field? Well, you'd have to try and do something about it, right?

Share All sharing options for: Another Cubs Brick In The Wall

If anyone understands failure, it's a Cubs fan. But luckily, within baseball's inherent seasonal impermanence lies a hope that next year, it will all be better. However, this is not the case with a marriage, where the institution maintains no seasons, and failure is set to persist, until one party or both decide the game, the season, the team and the league is lost to divorce. A true Cubs fan is incapable of divorcing their beloved boys in blue. We baseball fans are a "Till death do us part" breed. Thus it should be with a marriage (at least we said so that one day), but statistically, marriage is batting under .500. These are great numbers for Ted Williams on a double dose of steroids, but terrible for the societal construct called marriage. At least the 'lovable loser" Cubs sport a winning record of 10,438-9,976 since the franchise began, a better success rate than the current state of marriage.

So why am I blathering on about this? What does marriage and divorce have to do with the Cubs? Well, for me personally, a fair amount, and it's ugly, but I'll save that 'Sordid Cub Fan' story for a different article that I'll ask Al Yellon not to print if I ever write it and drunkenly send it to him. No,this is a story of the permanence of impermanence, the story of a Cubs fan, the perfect Christmas/Hanukkah gift (almost), and a failed marriage.

Let us begin where all good stories begin, with a love affair. My friend of two decades, Scotty Freeman, fell in love with Melanie (last name withheld to protect the non-innocent) in the mid 2000's, and shortly before their impending marriage, Melanie bought Scotty one of the greatest gifts a Cubs fan could ever hope for: A commemorative brick paver in the Vince Lloyd section near the main Wrigley Field ticket window. 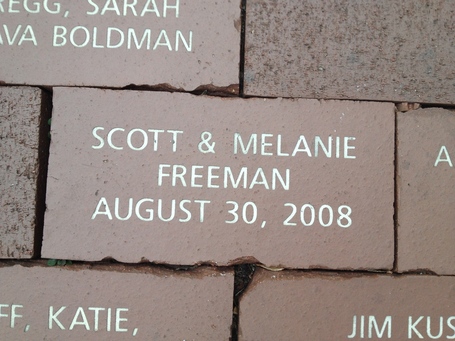 Unfortunately, a few short years later, this brick that once stood for undying love and devotion, now lies as a monument to failure. Scottie won't even use the main entrance of Wrigley anymore, preferring the side gates for fear of seeing the brick that might trigger memories of bad decisions gone wrong. Incidentally, the Cubs lost 5-2 to the Phillies on August 30, 2008, but sat atop the NL Central. Just like Scott and Melanie, the Cubs were full of hope.

So, what's a divorced Cubs fan with a commemorative brick commemorating a rotten relationship to do? Can the brick be switched out? Can Melanie's name be sandblasted away and replaced with another name? I decided to help out my old friend and find out, but first we had to take matters into our own hands.

Scotty had trouble finding the brick at first as he hadn't seen it since before the last time he saw her. But the exceptionally cheery phone jockeys at the Cubs Ambassador Office, who are at the ready with your brick location, bounded to the rescue. We found the brick and immediately went to work. Given Chicago 's complicated ordinances, and intimately knowing how sensitive Wrigleyville residents are to any new construction in their neighborhood, we made sure to immediately cordon off the area for the safety of passersby. 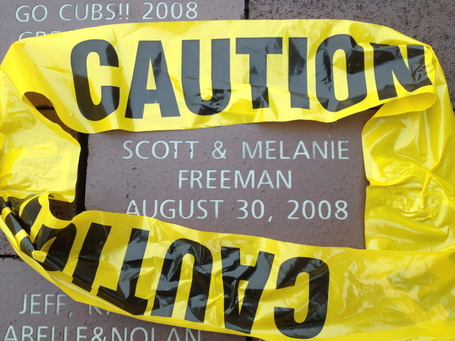 We then expunged Melanie's name with duck tape, which also coincidentally holds my car together. 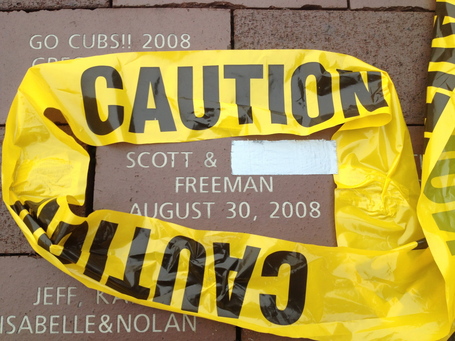 Scotty is a happy man!!! 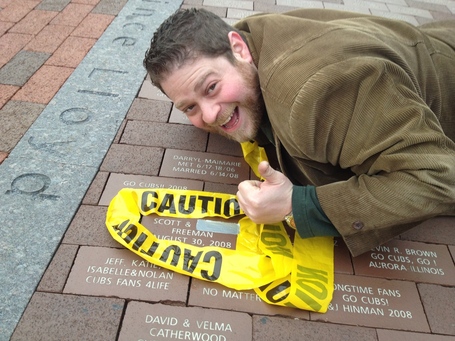 Problem solved! Or was it?

Shortly after this photo was taken, one of the Cubs employees approached us and inquired as to our future plans to clean up the eyesore we had just created. We gave him the skinny on the divorce brick, he laughed and left us to our own devices. We then pulled up the tape and went to the bar.

Over a few overpriced Guinness and a shot of whiskey at Sluggers on Clark, I asked Scotty about his marriage. As a recently divorced man myself, I find it helpful to commiserate with another person in "the D club". Basically, she was a bad traveler who always wanted to come home as soon as they got anywhere. She even hated their honeymoon trip to Rome! She left him three times before they even got married, and the last time she left he said "Don't come back." She didn't. Ultimately, Scotty feels that he should have known better. But how could you have known better? You learn who you are because of painful breakups. It's common knowledge among my jilted friends that you simply marry the person you happen to be with when you are ready to get married. More than half the time, you end up divorced, so there's no need to feel regret. It's a common mistake. Join the club.

After swapping a few war stories and crying in our beers, it was time to blow off a little steam and do something neither one of us had done since before we were married. Batting Cages! 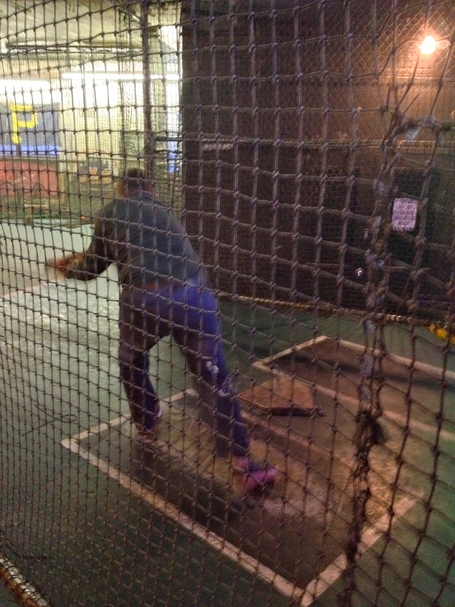 Scotty and I fouled off and missed more balls than we hit. Which was to be expected. I had forgotten how powerful and in control you feel when you connect, and how painfully a foul ball rings off your hands. I'll let you draw your own conclusions as to what I mean by those last few sentences.

We both failed at hitting, marriage, and editing Melanie's name off of the brick. Now what?! Another overpriced beer. Over which I promised Scotty I would contact the Cubs authorities to inquire as to how one goes about relieving the Cubs of the emotionally stained brick that rests upon the hallowed stone apron around Wrigley Field. We bid each other adieu, even though neither one of us speaks french….

A day later, I called the Cubs Ambassador Office again and identified myself falsely as Scotty Freeman and asked the (damn, they're cheery over there) receptionist how I might go about changing out the brick. He informed me that, "They're stuck in there real good", and they have no plans on switching, editing, changing, sandblasting, or selling any more bricks. The program is dead. Period. End of story. In the meantime, he told me (Scotty) that I should put my name on the "Point of Interest" list for further information, and rattled off a phone number that I pretended to write down.

I didn't call. The conclusion is obvious. You're stuck with your dead marriage brick until the Cubs decide to sell 58-cent bricks for $300 again. Tough luck Scotty. Can you imagine how many commemorative bricks signify failure? Allow me to estimate. 50 percent of the bricks with two names on them now exist as a shrine to a failed relationship, and certain other bricks have chiseled their depressing pain directly onto the brick! 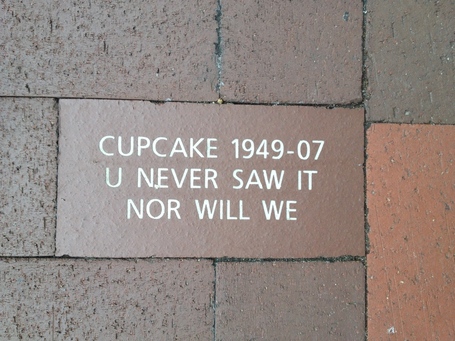 Sorry, Scotty. You're a great guy and I tried. If it were my brick, I might have pressed the issue with Cubs brass and argued like I do with Chicago's department of finance over parking tickets, but this ain't a battle you can win. The best thing you can hope for, is that something will go horribly wrong during the impending Wrigley renovations and your brick will be crushed. I'm not wishing it, but I know most Cubs fans are expecting it.

Heck. Maybe it's a good thing to have your traumatic experiences etched in stone. A healthy reminder that even when you think you're doing everything right and making good decisions, you might be mistaken. I have a tattoo on my chest for my ex wife which I got as a ticket back into my house after my wife kicked me out the first time. I love it and would never remove it, because my marriage and the tattoo is part of me and always will be. Can't change the past. And unfortunately, you can't change the brick either. 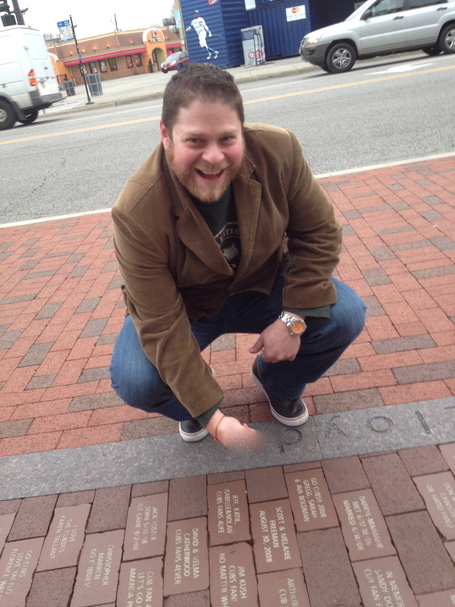 Scotty, the Brick, and his famous blurry hand….