Doesn't it always seem as if openings get delayed for reasons beyond anyone's control? That's what happened at Wrigley Field for the opening of something that's now iconic.

Share All sharing options for: A Day In Wrigley Field History: September 5, 1937

The first time the Cubs tried to show off their brand-new bleachers, the game got rained out.

I'm starting in the middle of the story, instead of the beginning, so here's the beginning: For many years the Cubs either had no seats or a "jury box" of bleachers in the outfield at Wrigley Field. In 1937 owner P.K. Wrigley decided to add permanent bleachers, for two given reasons: to "beautify" the park (the first indication that Wrigley was interested in something other than winning baseball), and to get more people into the ballpark. In addition, the bleachers were to give storage space to grounds-crew equipment -- they still use some of the space for that to this day -- and to eliminate the custom of putting fans behind ropes on the field. This was happening at many ballparks in that era.

So, after the Cubs swept a doubleheader from the Cardinals on July 5, 1937, construction began on what we now know as the ivy-walled bleachers. From Stuart Shea's "Wrigley Field: The Unauthorized Biography":

On July 9, the John Griffiths & Son Company began deconstructing and reconstructing the bleacher seats. The center-field scoreboard, still sporting the Doublemint Twins figures, was the first order of business. The builders ripped the scoreboard in half, disposed of the portion including the American League scores, and reinstalled what was left about fifty feet off the left-field line, where it would remain in operation until the end of the 1937 campaign.

As a result of this surgery, instead of "Wrigley Field, Home of Chicago Cubs," fans beyond the ballpark now saw on the back of the scoreboard, "ey Field, ome of go Cubs."

Construction went on for nearly two months; there are reports that the building continued even during games, with one report that a construction worker was hit by a home-run ball.

Finally, the layout was ready to go for what was to be a scheduled Saturday game against the Pirates September 4. Rain intervened, and the teams played a doubleheader September 5. The Cubs had just lost two straight to the woeful Dodgers in Brooklyn, knocking them out of first place. They would continue their slide as the homestand began with the spanking-new bleachers, getting swept by Pittsburgh 7-0 and 4-1 in front of 34,091, putting them two games out of the league lead.

Irving Vaughn's recap in the Tribune makes no mention of the new bleachers, but a photo (which, unfortunately, I cannot reproduce due to copyright restrictions) attached to his article shows a portion of the new right-field bleachers. Part of the seating area appears to be filled to capacity -- but one section down the right-field line doesn't appear to be completed.

A week later, the Tribune's Edward Burns wrote about the new bleachers, calling himself an "erstwhile scoffer" and praising the new setup:

With all its scenic charm, Wrigley field will present an ample playing area, with a gain of 32 feet over the former park on the right foul line and a loss of only six feet on the left line. The only big slice is out of dead center, where balls have seldom gone more than 400 feet under the old setup.

One of the purposes of the new bleachers at Wrigley field is to give the bargain seeking fans a larger number of seats and more comfortable seats. But, if the truth were known, the desire for scenic distinction probably was more of an incentive than the desire to spring the capacity of the field.

Mr. Wrigley conceived the general idea of the beautification plan. Then he told Bill Veeck Jr. of the Cub office staff to start negotiations with architects and designers. Young Bill shopped among several, and finally got things going between the firm of Holabird & Root and Mr. Wrigley.

"Young Bill", of course, is the Bill Veeck who later became White Sox owner -- at the time, he was just 23 years old. Not only did he have a significant connection to the Cubs -- his father was team president -- but he is responsible for planting the ivy on the outfield wall. Not only was it his idea, but he personally planted some of it. In his later years, after he sold the White Sox to their current owners in 1981, he spent many afternoons, shirtless in warm weather, in the Wrigley bleachers until his death in 1986.

Anyway, Burns had more to say about the brand-new Wrigley bleachers:

Bittersweet is now climbing the the new buff brick circular wall, and in time Boston ivy will thicken the foliage. Chinese elms, among the most decorative of trees, are to tower from each of the eight terraced stepups of the wall leading to the great new scoreboard. The scoreboard itself, incidentally, will embody new magnetic principles never before employed in a scoreboard.

Those "magnetic principles" are the "eyelits" which show the batter's number, balls, strikes and outs. They are still operated by the original equipment installed in 1937, more than 75 years later. The Chinese elms are long gone; buffeted by winds off Lake Michigan, they lasted only about three years. The "terraced stepups" are still there, though.

The bleachers remained virtually unchanged for 68 years; the original wooden seats had fiberglass covers put on them in the 1980s, but otherwise the configuration remained the same until much of the seating structure was torn down and the new bleachers, with more seats, were constructed in the 2005-06 offseason.

The last day under the old configuration was the final home game of the 2005 season, a 3-2 loss to the Pirates on a miserable, rainy afternoon, Wednesday, September 28. Before we inhabited my current perch in the left-field corner, our group used to sit in right field. Here's a photo I took of our bench after that last game ended, which I thought summed up the day and the end of an era quite well (click to embiggen). 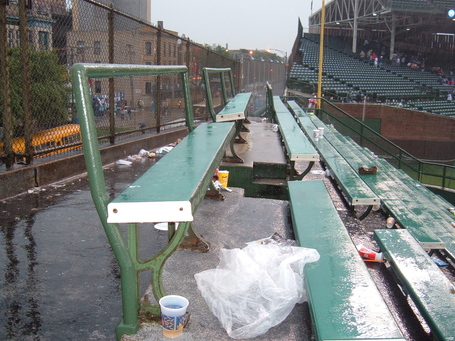