The Sordid Travels Of A Cubs Fan: "Online Shopping"

Searching for that perfect gift for the Cubs fan in your life? I've made your holiday shopping a little easier this year by weeding out the Cubs merchandise that you should absolutely NOT buy.

Share All sharing options for: The Sordid Travels Of A Cubs Fan: "Online Shopping"

Well, it's that time of year again! Time to spend your hard earned cash on your family and friends in the hopes of receiving a decent new sweater that doesn't make you look like Bill Cosby circa 1989. The halfway point of baseball's long bleak off season is punctuated with the madness that is "The Holidays." And what better way to show that Cub fan in your life that you love them (whilst supporting the team financially), than by buying overpriced licensed fan gear in the MLB online store? In fact, the store is just loaded with fabulous items any Cubs fan would love to own! So to make your shopping easier during this festive season, I've weeded out some of the merchandise you should absolutely not buy the Cubs fan in your life. Welcome to the Cubs Gear Hall of Shame. Considering price, usefulness and aesthetics, here are my Top 10 worst items you can purchase in the Cubs store. 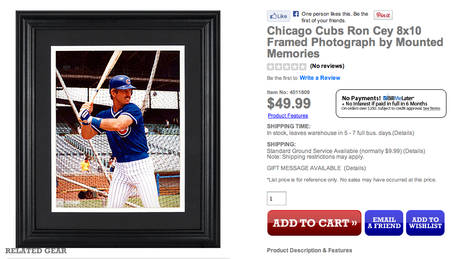 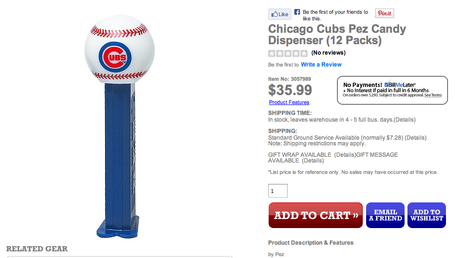 Wow! What a deal! You pay $3 a pack for colored sugar, and they'll throw in the Pez dispenser free!

8. The Cubs/Mets All Star Apple 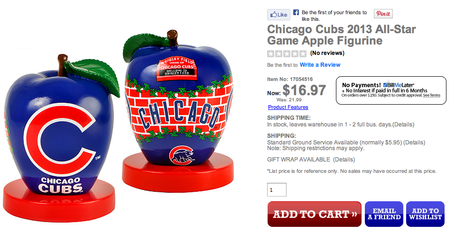 Travis Wood was the Cubs' only All Star representative at Citi Field in Queens this past July, and he didn't even pitch. If there was ever a year to not commemorate the All Star game for a Cubs fan, 2013 was it! Even on sale… ummm…. no. 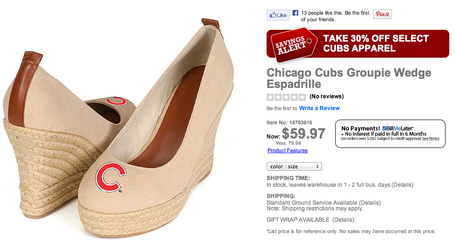 Nothing says "I can't dress myself" than a big red "C" on your foot! I texted a link of these shoes to my ex-wife, knowing how much she would hate them. And hate them she did! (It's satisfying to have her hate something other than me.) At least, when compared to ugly shoes. I'm awesome! 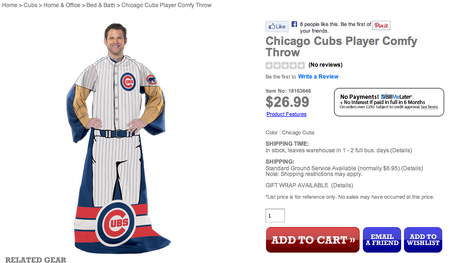 Looking to upgrade your snuggie to something more flammable and tacky? Look no further than the Cubs player throw! Sure, you have no feet, but your golden arm muscles are sure to crank the ball over the wall! Blanket fail. 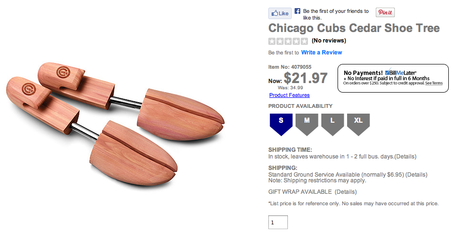 So, you screwed up and bought the wrong sized shoes because you were too hasty at the outlet mall? No worries! Show your Cubs fandom while stretching out those moccasins! To be fair, this shoe stretcher costs the same as most non-Cubs related ones, so you might as well buy this one if the need arises… and cedar smells nice too! 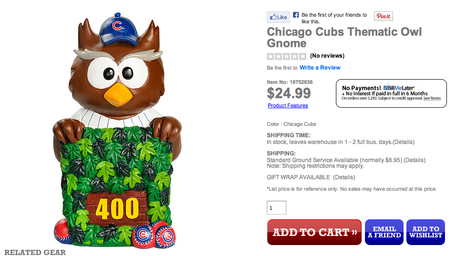 Exactly which theme this "thematic" owl gnome is going for is beyond me. All I can tell is that he's not wearing pants, and he's covering himself up with an ivy blanket. Who's on First? 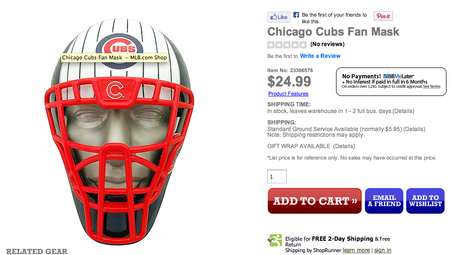 Have a Hannibal Lecter type Cubs fan brother-in-law? Are horribly ugly? Or want to not protect your face while actually catching a ball game? Well then. Buy the Cubs fan mask! (Or save the money for plastic surgery) Wear this mask to the game and enjoy your "creepy masked guy" cavity search! 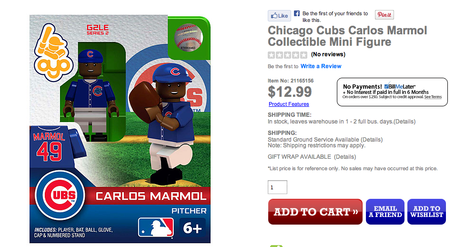 I feel bad for Marmol. In the late oughts, I would rush home from walking my dogs while listening to the game on WGN radio, to watch Marmol's wicked slider on TV. In 2013, he couldn't throw ball one in a close game without the Wrigley boo birds eventually running him out of town. Now he lives on in miniature form. Go figure-ine. He's not even discounted. Collector's item? Probably not. 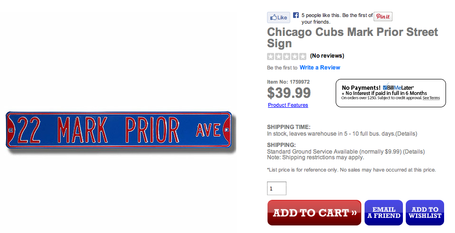 So… Mark Prior's 119 pitches weren't enough for you in Game 6 of the 2003 NLCS? Relive your painful memories with a Mark Prior Ave. street sign! Unfortunately, Mark Prior Ave. has been inaccessible since Dusty Baker drag raced his car down the thorough fair one too many times. For $40 plus tax and shipping, this sign could be yours! But why?

Now that you know what not to buy a Cubs fan, go buy something better! It'll make you feel good! Science says so! Spending money on stuff releases "happy juices" in your brain, and the off season is about the only time a Cubs fan has any hope of being happy. Won't you help? Buy some Cubs gear!

Just don't buy the ones on my Top 10 list... this "stuff'' shouldn't have ever existed. It's useless. Future garbage.

If you plan on buying merchandise in the Cubs shop, there are many 30 percent off deals and other coupons and codes which can be redeemed if you're a subscriber to their email list. Unfortunately, they send me emails incessantly, but there are bargains to be had. Especially in the clearance section. In my past experience, there's a fire sale after Christmas, so try and throw your family party late this year!

The average Chinese worker earns $57.69 a week to make this junk. Just enough to buy one Ron Cey photo or two shoe stretchers! The least you could do is cough up some dough to make certain global trade and capitalism thrives, while providing revenue to our beloved Cubbies. Your purchase could help pay for a new manager, or a number three starting pitcher. Yes. This is the year to show your Cubs pride and finally upgrade your Doug Dascenzo jersey to a $300 Ryne Sandberg V-Neck Road Jersey. It's what Mother Nature would have intended if she were alive today: 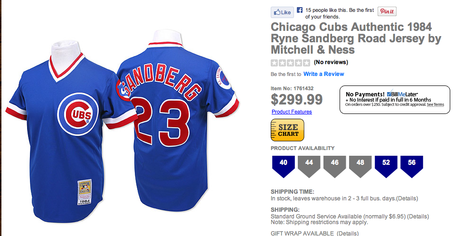