About 1,500 season-ticket holders and their guests packed into the Bank of America Theater in downtown Chicago for a presentation from Cubs management.

Expecting to see Theo Epstein join Crane Kenney in talking to Cubs season-ticket holders Saturday at noon, those of us gathered for the early afternoon session got the spiel from Jed Hoyer instead. Why? Child-care issues for Theo, I was told. Hey, that's all right -- understood for someone with a small child.

Nevertheless, Kenney and Hoyer put on a presentation jam-packed with both prepared speeches (yes, they had teleprompter help) and videos narrated by Gary Sinise and Len Kasper, among others. These videos showed off the Cubs' new spring-training complex (nearly complete) and the under-construction academy in the Dominican Republic, the proposed renovations to Wrigley Field, overviews of Cubs history in advance of the 100th anniversary of Wrigley Field in 2014, and a brief interview with new manager Rick Renteria. The Renteria interview had to have been done in the last two days, because if not, that means they did it before he was hired and had him at the top of the list anyway. (Jed Hoyer said that Renteria had been the front-runner from the time of his first interview.)

Both Kenney and Hoyer thanked season-ticket holders for their "faith and patience" and apologized multiple times for the play of the team last August and September, and in August and September 2012. Hoyer, asked a question regarding the July selloffs of the last two years, said he hoped the team was getting closer to being a buyer at the deadline, but they would always look to be adding talent to the system. He also went through a long list of trades that had been made since he and Theo took over, including the ones sending Sean Marshall, Ryan Dempster, Paul Maholm and Scott Feldman to other teams and the young talent that came back in return. He noted that overall, they had sent about 4½ years' worth of team control of older players away, in exchange for 78 total years' worth of team control of younger players.

Kenney said the team is still committed to building a strong organization from the bottom up; said no team has spent more on the draft over the last four years (even though he also said the team starts every year in a $40 million hole due to not having the types of revenue sources that other clubs have), and also mentioned the Cubs have added 69 new people to the business side and 64 to the baseball side. Both he and Hoyer emphasized that many of the baseball hires have been in scouting and Hoyer spoke quite a bit about adding to the scouting staff and using multiple ways of evaluating talent; Scouting reports, medical information, the player's background and character, and quantitative data.

Hoyer said that when he left Boston to become Padres GM another team rebuilding, he asked people he knew what would be the hardest thing about rebuilding. He was told that he and the staff would be "fine", but the hardest thing would be walking through the stands. He thanked everyone again for being patient. Kenney and Hoyer both talked up Kris Bryant and C.J. Edwards as key parts of the team's future, along with guys like Javier Baez, Albert Almora and Jorge Soler (the latter three were featured in one of the videos shown).

WGN-TV broadcaster Jim Deshaies came out after Kenney and Hoyer were done and asked them a few questions -- one of which dealt with the WGN-TV contract and whether it would be renewed. Kenney said the team has a long history with WGN-TV which benefits both parties, and added, "One phone call from Larry Wert and we'll get it done for another five years." (Wert is WGN-TV's general manager.) To me, it sounded like they'll get something done, and likely within the 30-day window that opened last week.

Also revealed were plans for the 100th anniversary celebration at Wrigley Field throughout the 2014 season. There will be a commemorative book released soon, and a DVD in December, along with a website, wrigleyfield100.com (not active yet) which will have much more information on everything happening. All the season tickets will have some sort of past photo or scorecard from Wrigley's past (including some non-Cubs things such as Bears or Blackhawks images); the ones they showed were of tickets with some of the old scorecard images that I posted here last winter. (I'm hoping to get some sample images that I can share with you soon.)

During the season, there will be 10 total homestands. During each homestand, the team will celebrate a specific decade, from the 1910s to the 2000s, with appropriate giveaways and throwback uniforms. The throwbacks will be worn on Sundays, along with throwbacks worn by the visiting teams; every Friday home game will include a bobblehead giveaway. There's more info on the uniforms at this page from sportslogos.net, including specifics on the 1920s era jersey that will become an alternate road jersey for the 2014 season. (Here are some more examples of what that jersey might look like.)

The floor was opened to questions, similar to what might happen at a Cubs Convention session (this, in fact, was quite similar to a convention session, with the addition of the videos), and one young fan asked whether Starlin Castro was going to be traded. Hoyer answered that the worst time to trade a player was coming off a bad year, and that many good players have one bad year when they are young. He's hoping for rebound years from Castro and Anthony Rizzo, and indicated Castro likely will not be traded.

Here's a photo that was posted in the lobby of another addition the Cubs plan to make to the renovated Wrigley Field, of an upper-deck club that would have views of the field (I'm not sure what that building next to the scoreboard nor the one at the left of the photo are, though; those don't exist in real life): 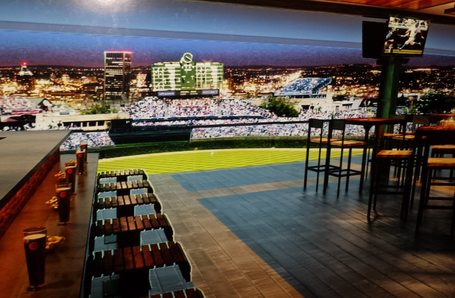 The real reason, of course, for having these sessions is as sort of a pep rally; they can be seen as designed to get season-ticket holders who might be on the fence about renewing, to re-up their tickets for 2014. Whatever the reason, it's a good thing for the Cubs to do, and nice to see the plans for the future and talk baseball during the off-season (nice to see BCBer elgato there). We can only hope they all come to fruition, from the renovation of the ballpark to the renovation of the team.