Not many people saw this game. Nor was it covered well in the newspapers.

Share All sharing options for: A Day In Wrigley Field History: September 28, 1948

The years of neglect had finally caught up with the Cubs. Just three years after they had won the National League pennant, they were reduced to fighting to stay out of last place.

1948 also brought labor strife to the Chicago newspaper industry. There was a strike of composing-room employees that lasted over a year, from late 1947 through early 1949. (Some think this might have been one of the reasons the famous "DEWEY DEFEATS TRUMAN" headline appeared in the Tribune that election day.)

It also resulted in articles that were "typeset" like this one: 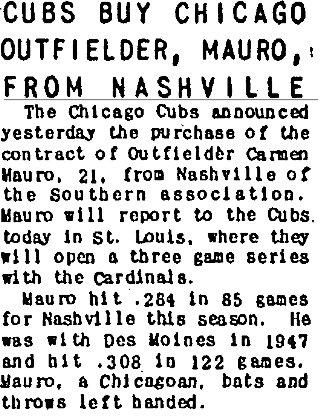 Essentially, the writers and editors were writing these things on a typewriter, then photographing them, before they were placed on a printing plate (as opposed to being typeset with single metal letters, as had been done for decades).

The bylines for writers, at least in the sports sections I found in the Tribune archives, were eliminated. So the name of whoever wrote this recap is lost to the ages:

That's actually pretty snarky writing for 1948. Maybe the writer, knowing his identity wouldn't be revealed in print, decided to be a little bit sarcastic. After all, the Cubs, from 1929-1945, had been one of the best teams in the National League. This was a tremendous fall from grace; not only did the Cubs lose two of their last three to finish last in the league for the second time in franchise history, but the day before the season ended, they lost to the Cardinals in St. Louis for their 90th defeat of 1948. It was the first time in franchise history the Cubs had lost 90 games. (By comparison, the woeful Phillies had 24 90-loss seasons by 1948.)

Cubs fans in 1948 could not imagine that their favorite team would lose 90 or more 10 times in the next 18 years. The team was entering the worst era in club history.