This was a sad day at the North Side ballyard.

Share All sharing options for: A Day In Wrigley Field History: April 17, 1964

Ken Hubbs was voted National League Rookie of the Year in 1962, the Cubs' second straight RoY (Billy Williams won it in 1961).

Just 22 in 1963, Hubbs regressed a bit offensively, but the Cubs had much hope that he'd be their second baseman for years to come. He was outstanding defensively and his size -- 6-2 -- led them to believe that he'd put on some muscle (he was listed at just 175 pounds) and hit for a bit of power. In some ways, he was a Ryne Sandberg prototype.

Hubbs had a fear of flying, and since airplanes were becoming the mode of travel for virtually all baseball road trips, Hubbs took flying lessons to try to conquer his fear. On February 14, 1964, not long after receiving his pilot's license, he took off from an airport in Provo, Utah, in a snowstorm. The plane crashed and Hubbs was killed.

The Cubs honored him in a pregame ceremony before Opening Day, as reported by Robert Markus in the Tribune:

I have a recollection from the time that the Cubs had intended to retire Hubbs' No. 16, but I can't find any specific references to that anywhere. I have read in recent years that they did promise not to reissue No. 16, but only for 1964. Yosh Kawano, Cubs clubhouse manager who, among other things, was responsible for assigning numbers in those days, kept No. 16 out of circulation until 1970, when it was given to Roger Metzger.

The Topps Company issued a special "In Memoriam" card in honor of Hubbs, which is the image at the top of this post. The entire card is below; click to embiggen. 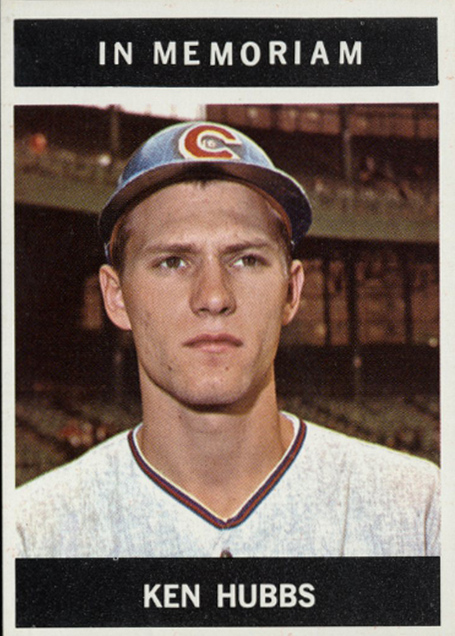