The Cubs had a great summer in 1967, contending much of July, before fading.

Share All sharing options for: A Day In Wrigley Field History: July 22, 1967

They'd be wrong. After a slow start, the Cubs went on a 21-5 run in June and early July that culminated in a win over the Reds July 2 that put them in a first-place tie -- the latest in the year any Cubs team had been in first place since 1945. (I wrote about that game in last year's history series.)

The Cubs won again the next day, then lost eight of nine to drop to four games behind the front-running Cardinals. But the Cubs weren't quite done with their run of contention -- they won seven of their next eight, and it's the last game of that sequence, a 6-5 win over the Giants, featured in today's installment.

Here's how Richard Dozer wrapped the game in the Tribune:

"Slashing with the sting of a cutlass." You don't see writing like that any more, certainly not in a baseball recap. But what exactly happened with the "base-running blunder" described by Dozer is unclear. In the eighth inning, Ron Santo and Ernie Banks led off with singles. One out later, Randy Hundley doubled, and Santo scored. Dozer wrote:

Why is that unclear? The baseball-reference boxscore linked above says that wasn't Ernie on base -- it was Glenn Beckert, who came in to pinch-run for Banks. Retrosheet's box score says the same thing and so does this box score from Baseball Almanac.

The boxscore of that game from the Tribune fails to mention Beckert playing in the game at all, though it does note a number of substitutions, none of which appear to be in the right place in the batting order: 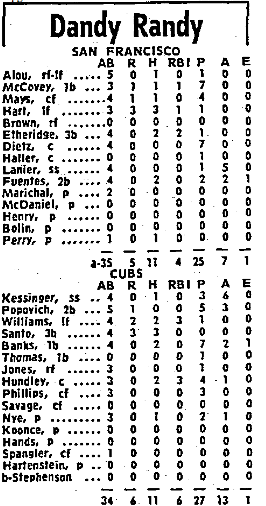 I asked Mike Bojanowski, who attended a lot of games and kept score in that era, if he had been at this game. No luck -- he wasn't. I was able to locate a boxscore from The Sporting News, then considered the "Bible of Baseball." That boxscore, too, shows Beckert as a pinch-runner for Banks in the eighth inning: 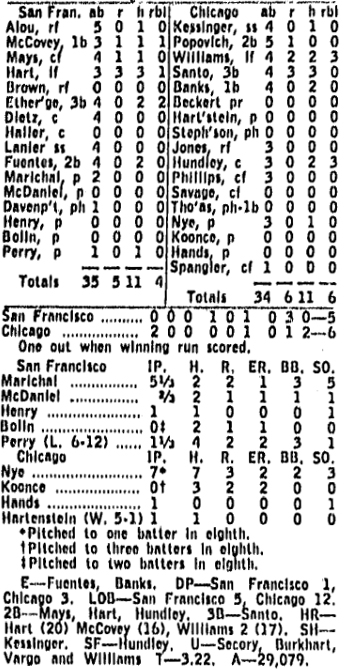 Was Dozer making up quotes from Ernie? We might never know.

The Day in Wrigley Field history will take the day off tomorrow for the New Year's holiday and resume on Thursday.